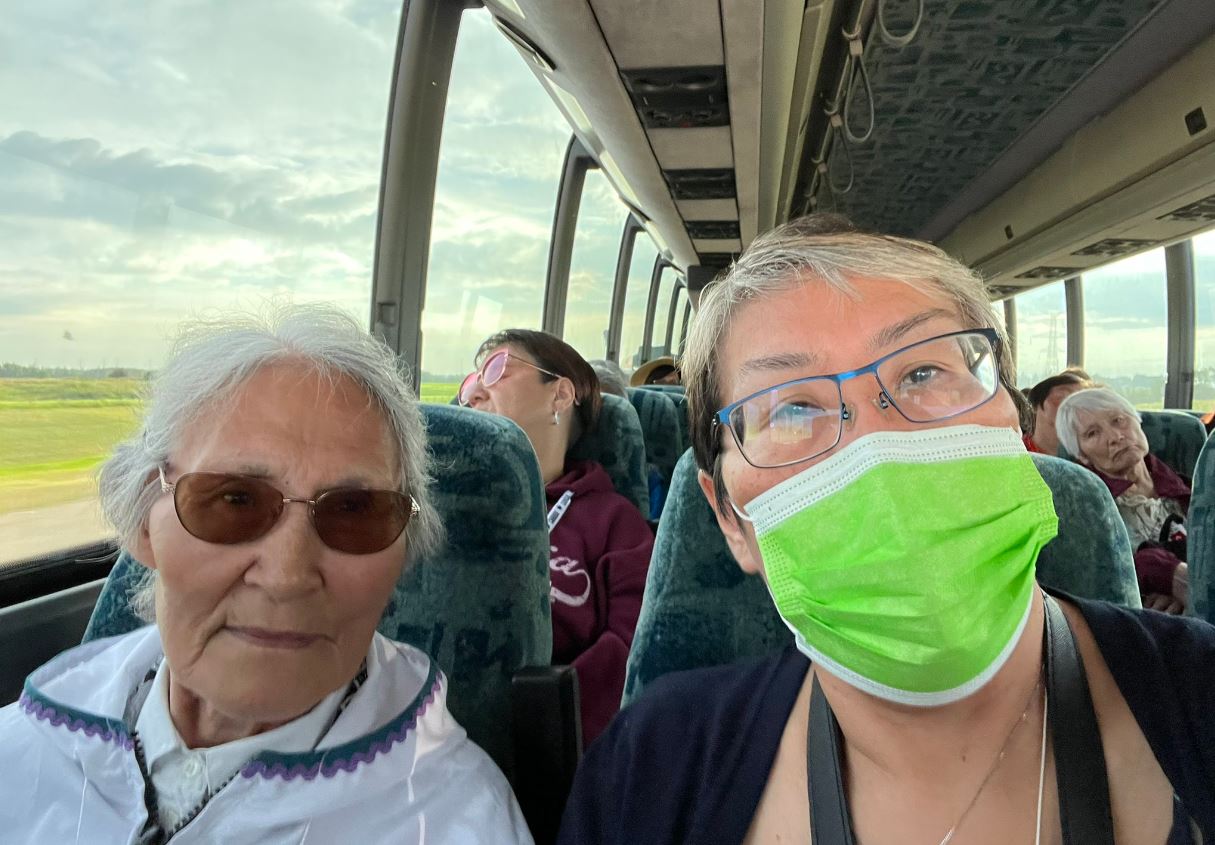 An elder from Kugaaruk who was in Maskwacis, Alta., yesterday for Pope Francis’s apology said she was moved by his words.

Sidonie Nirlungayuk, 77, travelled to Alberta to take part in some of this week’s papal visit events. As a child, Nirlungayuk attended Joseph Bernier Federal Day School in Chesterfield Inlet.

Sidonie travelled with her daughter, Mary Nirlungayuk, who came from Winnipeg.

The Pope apologized yesterday to survivors of Canada’s residential school system, saying he was “deeply sorry.”

“This was a disastrous error, incompatible with the Gospel of Jesus Christ,” he said.

“I humbly beg forgiveness for the evil committed by so many Christians against the Indigenous Peoples.”

Canada’s residential school system was a federal government policy from the 1880s until the 1990s. It was designed to separate Indigenous Peoples from their language and culture by removing children from their family and community.

Many of the schools were run by Roman Catholic clergy, and it was common for children who were sent there to suffer physical and sexual abuse.

The Truth and Reconciliation Commission of Canada was instrumental in educating the public on the impacts and legacy of the residential school system. It culminated with a report and 94 calls to action in 2015. One of those calls to action is an apology from the pope, on Canadian soil.

In an interview with Nunatsiaq News, Sidonie reacted in Inuktitut to the historic apology, with Mary translating her answers into English.

“It means a lot for the apology, because that’s what Indigenous people asked him to do,” Sidonie said.

“It was very emotional when he apologized, very touching.”

While the Pope did not specifically apologize on behalf of the church and not everyone has accepted the apology, Sidonie said   it was important to be there sitting beside other Inuit.

Sidonie has travelled to the Vatican in previous years, and said she was happy to see the Pope visit Indigenous communities in Canada. She said she is appreciative of his willingness to travel.

At 85 years old, Pope Francis has been sitting in a wheelchair for most of his recent appearances due to health and mobility issues which have forced him to cancel some trips this year.

“He travelled a long distance to be here,” Sidonie said.

“You can tell he’s ageing, however, that didn’t stop him [from making] the trip.”

Overall, Sidonie said she is thankful for the opportunity to witness the apology. She said she is also looking forward to the final Alberta events of the trip, including mass at Commonwealth Stadium in Edmonton Tuesday and a scheduled visit to Lac Ste. Anne.

The Pope gave a similar apology in April after meeting with an Inuit, First Nations and Métis delegation at the Vatican. It was during that trip that the church announced the Pope’s plans to travel to Canada to deliver the same message directly to residential school survivors and their families.

Pope Francis will continue to Quebec City later this week and will conclude his trip Friday with a stop in Iqaluit.