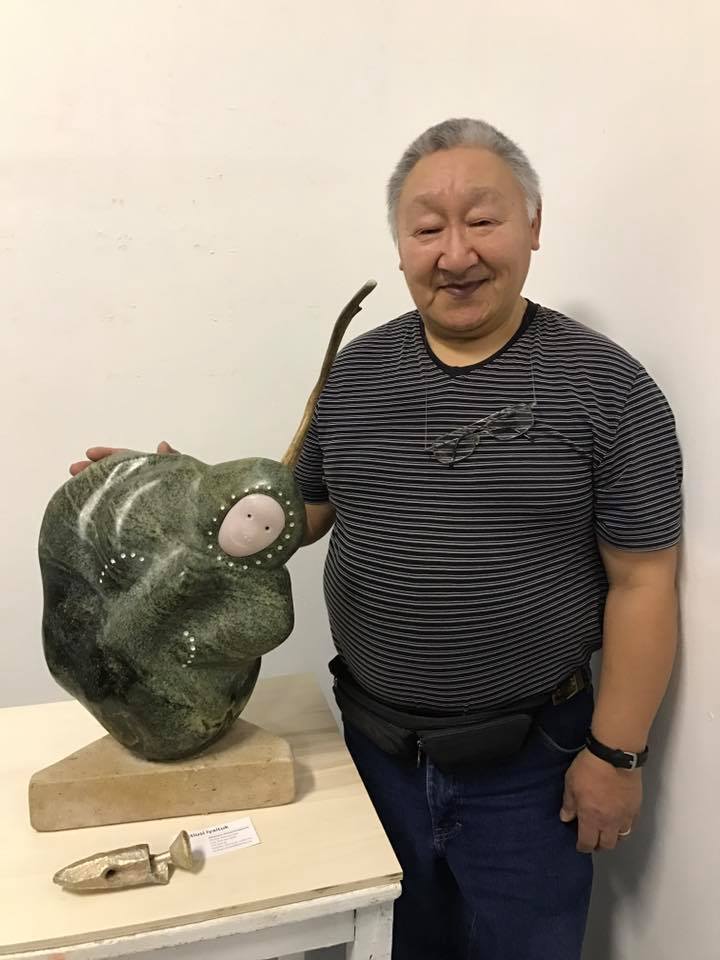 Mattiusi Iyaituk, posing here with another one of his carvings, is set to begin work on a large qulliq for the lobby of the new Isuarsivik Regional Recovery Centre building in Kuujjuaq. (Photo courtesy of Isuarsivik)

Ivujivik carver ‘proud’ to be designer of giant qulliq

Mattiusi Iyaituk helping to create ‘giant Inuit lamp,’ to be featured in the new recovery centre in Kuujjuaq

A carver from Ivujivik has designed what he believes will be one of the largest qulliqs ever made in Nunavik.

Mattiusi Iyaituk has created the blueprints and eventually will add the finishing touches to the Qullialuk, or “giant Inuit lamp.”

When finished, it will greet guests inside the lobby of Kuujjuaq’s new Isuarsivik Regional Recovery Centre, which is set to open later this year. Isuarsivik provides addictions recovery programs to people from across Nunavik.

Iyaituk says he is honoured to be a part of the project, which is financially backed by corporate donors, because it will welcome Inuit patients as they seek healing.

“It’s an honour to be the person to do something different, it’s a very important subject,” he said. “I’m very fortunate to make a stone lamp that’s never been made in Nunavik.”

Traditionally a qulliq is lit with oil, often from a seal, but this one will be different, Iyaituk said. Instead it will be lit with less traditional fuel and a burner.

The giant qulliq will be carved from a 1.2 tonne soapstone — about the same weight as an average car — from the Raglan Mine, located west of Kangiqsujuaq.

The stone was flown to Montreal and is currently in a workshop in the Quebec City area, Iyaituk said. Some initial preparation work has started, but Iyaituk says he hasn’t travelled south because of COVID-19 concerns.

Iyaituk and other workers will carve the stone and install a burner in Kuujjuaq later this year.

Construction on the new Isuarsivik building is currently on pause due to winter weather, and set to resume in the spring, said Marie-Helene Caron, the centre’s communications co-ordinator.

“The team is full steam ahead with the great progress of the construction of the new centre,” she said in an email.

“Our administration and clinical team are also advancing well with the healing program revision and development of new services as well as the transition to the new centre.”

As for Iyaituk, he says he’s looking forward to getting this project done, but also getting back to work after not sculpting for much of the COVID-19 pandemic.

“I haven’t done any sculpting since COVID started going around in the North, in Nunavik,” he said. “I’m very proud to be a part of [this project].”