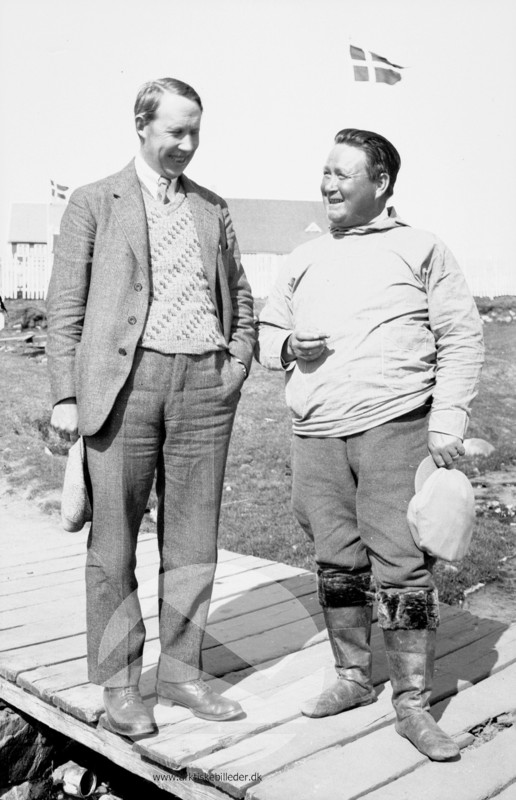 Jacob Olsen with Therkel Mathiassen in Greenland a decade after the Fifth Thule Expedition. (Photo by Erik Holtved. Arktisk Institut #124435.)

This week’s Taissumani column is the second in a two-part feature on Jacob Olsen. You can read Part 1 here: Jacob Olsen, a Greenlander in Canada, part 1.

In the summer of 1922, Jacob Olsen (Jaaku) was with Therkel Mathiassen at Repulse Bay where Olsen’s ability to assist in the archeological work was hampered by an injured and infected finger; he functioned instead as cook.

From there they continued on to Southampton Island, guided by Aullanaaq, intending to spend a relatively short time there before returning to Danish Island. Unfortunately, they were forced to winter in trying circumstances with few supplies.

Olsen saved Mathiassen’s and his own life on Southampton Island when he heard Niviatsarnaq imploring her husband Angutimmarik, who had befriended them, to kill the two strangers.

Because of his abilities in Inuktitut, Olsen was able to understand the threat and defuse it.

In January, a woman, Nanuraq, became ill and was treated by an angakkuq, or shaman, her husband Makkik. A few days later, the healing attempts were taken over by Angutimmarik himself.

Olsen was present with Mathiassen at a healing ritual. He wrote down in detail what he saw. Knud Rasmussen subsequently reviewed the report for accuracy with both Olsen and the shaman, and published it in English. It transpired that the sick woman had broken a number of rules — discovered in part through audience participation and suggestion — and confessed her transgressions.

Olsen recorded another séance, in which everyone in the village was frightened to the point where no one dared to go out. Finally, the shamans were requested to drive the evil spirits away. Angutimmarik began with a song to invoke the spirits, which was subsequently translated and published:

What can it be that moves
which moves me
somewhere out over the earth, away from here,
which moves and will thus become visible,
something without entrails,
something that seeks to do evil,

something moving straight towards us.
Helping spirit Tipjarse, Tipjarse,
come, come to me,
I consult you and I interrogate you
And you must answer.

Olsen wrote that, at times, the shamans were not content with merely singing: “They go out themselves to do battle with the evil spirits, and when they return, their hands and arms are bloody from the fight and their clothing in rags.”

But he had his doubts about the power of the shaman. He stopped short of calling the Southampton Island shaman, Saraq, an outright fraud: “I was witness to such a case, where a shaman named Saraq went out to fight against evil spirits, but I discovered that he had taken some caribou blood with him beforehand, and rubbed himself with this, without being discovered by anyone else. When he came in, he stated that the shaman who had been out with him had been unable to hold the evil spirit, but he, Saraq, had grasped it and stabbed it, inflicting a deep wound.… All believed his report, all believed that he had driven away the evil spirit which had been troubling the village, and no one was afraid any longer.”

Jaaku was also not above arguing with Inuit over their belief in taboos. He compiled a list of 90 taboos, before noting that the list even then was incomplete. He was frustrated by many of them.

When sickness in the camp was blamed on his and Mathiassen’s presence, he said, “I talked to them in such a way that they could understand it [my message], and pointed out that people were also getting sick and dying even before we came.”

When he killed a polar bear and got it to the snow houses, he was told that there were a number of precautions that the group must follow. They were to throw away all their clothes before going into the igloos. And they were not to use the fat for five days. But Jaaku ignored them.

“No taboo performances are necessary for the animals that I kill,” he said.

This pleasantly surprised the Inuit.

Throughout the dreadful winter of privation on Southampton Island, Jaaku maintained his faith. On Christmas Eve, 1922, he wrote in his diary, “I told them who we were celebrating and why He had come into the world.… I wish He would come into the hearts of those poor people.”

On March 23, 1923, Olsen and Birket-Smith left Danish Island with Aullanaaq as guide to begin their homeward journey. A month later they reached Eskimo Point, where the post manager, George Mitchell, was seriously ill with frostbite.

They spent part of their time there at an Inuit camp on Sentry Island. They had hoped to travel inland to further investigate the Paallirmiut, but the lateness of the season and the inability to get dog food spelled the end of that idea.

They continued on to Churchill, then made their way via The Pas and Winnipeg to New York, where they caught a ship to Copenhagen. Olsen published a book on his experiences – Akilinermiulerssaarut – which might be translated as “Report on the Canadian Inuit” in 1927. It has never been translated into either Danish or English.

Greenlandic scholar Robert Petersen thought that Olsen’s purpose in writing his book was simply to portray the Canadian Eskimos as they were.

Some of his early remarks may have seemed a trifle condescending, as when he noted of the first shaman he met, “He seemed pretty ridiculous.”

But overall Olsen presented an even-handed description of his experiences and of the culture of the Inuit, particularly the Aivilingmiut, the Inuit who lived near Repulse Bay.

Olsen became very fluent in the Aivilingmiut dialect during his time in Arctic Canada. He kept his expedition diaries in Greenlandic, but as he recognized more and more the differences between Kalaallisut and Aivilingmiutut, he modified his script.

When his book was published, another Greenlandic author and pastor, Otto Rosing, criticized the work for having so many expressions in Aivilingmiutut that in several places it was “unintelligible.”

This was an overly harsh criticism as the book was popular among Greenlandic readers, anxious to know about their relatives across the sea.

After his reunion with his wife Hansine and children in Greenland, Olsen returned to Denmark for a year, on contract to assist Knud Rasmussen in interpreting and writing up some of the Inuit folklore collected. Other trips to Denmark for the same purpose followed.

Jacob Olsen died of scarlet fever in Nuuk on July 10, 1936. He was only 45 years old. He was the first to be buried in the new cemetery there.

Canadian Inuit remembered him as unique among expedition members. There were qallunaat, there were Akukittut, and there was Jaaku, who said he was a Kalaaleq.