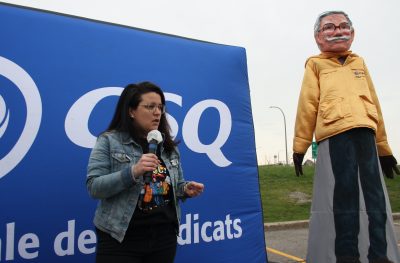 Two years after negotiations first began, the union’s president Carolane Desmarais (pictured) said the agreement is a step forward in helping Inuit employees of the Kativik School Board be more active and valued in education in the region. (Photo by Stéphanie Ricci, special to Nunatsiaq News)

Kativik School Board employees will see improved benefits and working conditions under a new collective agreement ratified earlier this week, according to union president Carolane Desmarais.

The previous deal expired in 2020, and staff had been working without an updated contract since then.

Teachers and support staff will receive increased salaries, better working conditions, more benefits for locally hired employees, and an end to what the union felt was unfair treatment, said Desmarais. Retroactive payments covering the two-year gap are being processed.

“These regional disparities contribute to this feeling that there is some gap between [employees] because of where they got hired.”

The new contract includes a six-per-cent salary increase and a single, lump sum payment of $600 per member to be paid 30 days after the deal is signed.

Other gains meant to bring compensation for northern hires closer to what their southern counterparts get include increased salaries for employees who have master’s degrees, as well as for education consultants and counsellors. Also, members working in Nunavik communities will receive food and housing allowances paid directly on top of salaries.

Desmarais said food allowances especially will have a positive impact on the local economy, because they encourage board employees to buy their food locally rather than having it delivered by air from the south.

Members working in the North will also be entitled to financial compensation for outings on the land.

“Members that got hired in the south benefit from outings that make it possible for them to travel from the communities (where they are working) to where they got hired, but local hires didn’t get this kind of [travel compensation] before,” she said.

“This is a gain that will help our members that live in Nunavik and who are local hires to travel from different communities and also to be able to go south.”