Through Piqutiapiit, Niap pays tribute to the work of Inuit women of the past

Piqutiapiit, an exhibit by Inuk artist Niap at Montreal’s McCordd Museum, celebrates the creativity and ingenuity of Inuit women through simple tools like ulus, needles, scrapers and thimbles. (Image courtesy of the McCord Museum)

A new exhibit by Nunavik artist Niap, whose real name is Nancy Saunders, is on display at the McCord Museum in Montreal.

Piqutiapiit — meaning “precious belongings” in Inuktitut — presents clothing and objects by Inuit women, celebrating their creativity and ingenuity through simple tools like ulus, needles, scrapers and thimbles. It opened March 25.

The exhibit is part of the museum’s artist-in-residence program, which invites artists to interact and engage with the museum’s collection, encouraging them to reflect on, connect with and communicate their own interpretations. 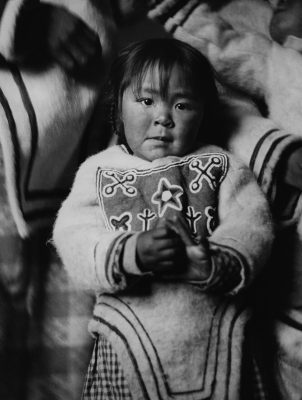 Portrait of an unidentified Inuk girl, about 1936 or 1937. Gift of Anne and Nicholas Downes. (Photo courtesy of the McCord Museum)

Niap, a Montreal-based artist who also spends time in her hometown of Kuujjuaq, said one item that deeply informed her project is the amauti.

“I came across this beautiful coat made for a young girl, the textures in it, the materials they used for it and the colours — I was in awe,” she said. “I was struck by how enormously talented Inuit are and that’s where I started building my own idea.”

With the amauti as inspiration, Niap beaded her own tapestry for Piqutiapiit. Influenced by the beaded decorations on the front of Inuit women’s clothing, called savviqutik, it took her six months to complete.

Niap said creating the tapestry taught her a lot about the hard work and patience Inuit women show.

“[The tapestry] celebrates their complete talent and the love they took to make these beautiful garments that today we see as artifacts,” she said. “Through the process, I learned the work it took to make such garments and understood finally how intense it is.”

According to Niap, the exhibit also challenges negative perspectives — many of them racist and colonial — that have been geared towards Inuit and other Indigenous Peoples.

“I hear, ‘Oh no, [Indigenous people] … they don’t show up to their nine-to-five jobs. But then you see this beautiful handcrafted clothing and this hunter waking up at 4 a.m. in the morning to go check his nets so they won’t freeze in cold weather in the middle of the night,” she said. 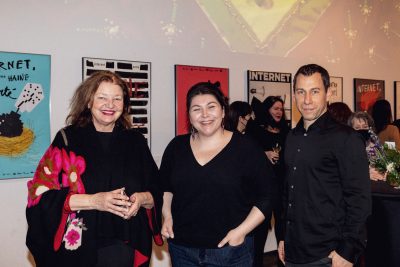 “You have to question: what’s the definition of hardworking? How is it different from culture to culture?”

For Niap, seeing the artifacts showed her that Indigenous people including Inuit simply have a difference in priority.

“I hope [visitors] come away with respect for the craft, the respect for the amount of work and care that was always put into our clothing and the ingenuity of Inuit women,” she said.

“People were taught that Indigenous traditions were not sophisticated and not developed enough. But it was not true — it was the way to justify colonization,” he said. “Showing these beautiful objects and how they were made with really simple tools — I think it’s part of the counter-discourse to say that no, that’s not true.”

According to Lainey, Niap’s work also challenges the idea that many Indigenous traditions like beadwork, sewing and making things by hand are in the past.

“Niap’s reinterpretation of these objects by making a contemporary beautiful piece is showing that it’s not over — these traditions are living, they are active and they are still contributing today,” he said.

For Niap, the exhibit ultimately hopes to celebrate Indigineity both of the past and the present.

“There’s no need to separate traditional life and modern life,” she said. “There’s a place for both in the world — where culture and tradition marry so well with modern lifestyles. I just hope that we find a balance between it all.”

Piqutiapiit remains open until Aug. 21 at the McCord Museum. Museum access is free for Indigenous visitors.