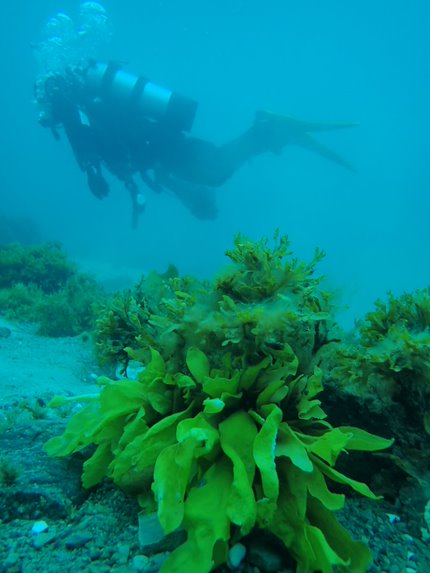 Divers conduct research in the waters off Cambridge Bay during a recent expedition there. They found plant specimens that were previously unreachable due to sea ice cover. (Photo courtesy of Amanda Savoie)

Call it a seaweed surprise.

Due to its coastal geography and small tide, Cambridge Bay was believed to be devoid of seaweed, said Amanda Savoie, a seaweed research scientist at the Canadian Museum of Nature in Ottawa and director of the Centre for Arctic Knowledge and Exploration.

For centuries, the frigid temperature of the water coupled with long periods of ice cover was a deterrent to any kind of exploration, scientific or otherwise, of what was happening below the surface.

But when Savoie learned there was Arctic scuba-diving equipment available at the Canadian High Arctic Research Station in Cambridge Bay (CHARS), and funding available from Polar Knowledge Canada, she pulled together a research team to “go look and see what we can find.”

Relying on the local knowledge and support of Inuk guide John Lyall Jr., Savoie and her team spent several weeks diving in Cambridge Bay this fall.

They discovered and documented several seaweed beds, and collected specimens to take back for preservation and study. 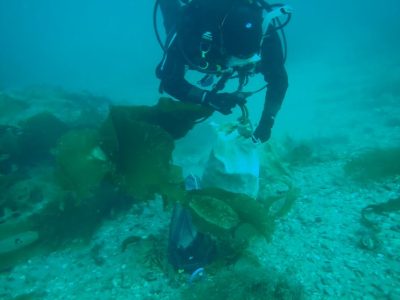 Divers retrieve plant specimens in the waters off Cambridge Bay during a recent expedition. (Photo courtesy of Amanda Savoie)

At events at the elementary school and at CHARS, the public was invited to learn more about Savoie’s research. She showed them live marine specimens, such as sea urchins and sea cucumbers, that were found in Cambridge Bay.

“The children and elders were really excited to see things that live in their land, but that they had never seen before because they don’t dive,” Savoie said.

She said elders of Cambridge Bay shared their memories of a time when the bay was iced over year-round.

But with the waters of Cambridge Bay now opening sooner in the year and remaining open longer, marine research scientists have the opportunity to explore.

The loss of sea ice cover due to a rise in sea temperatures has had a significant impact on all aspects of life on land in the North. But with no historical record of the marine ecosystem, it’s impossible to pinpoint the extent to which the changes in water temperature over the past few decades have altered life in the water.

More than just satisfying her scientific curiosity, Savoie said research trips to document and gather specimens in the High Arctic is critical for the entire northern community.

It will help environmental scientists build a deeper understanding of the way climate change is impacting biodiversity there now and into the future.

“We’re trying to take in as much information now as we can because we know it is too late to go back and get data from 20 years ago,” said Savoie, who plans to return next summer.

Paul Sokoloff, a senior research assistant in botany at the Canadian Museum of Nature in Ottawa, also focuses on the North and made one of several research visits to the Arctic in 2021, travelling to Agguttinni Territorial Park north of Clyde River on Baffin Island to collect plants and lichen for research and preservation.

“Those specimens tell us that these things were found at this place, at this time,” he said, “and that helps us to look at the impact of climate change in the past, and maybe going forward in modelling efforts, but also providing that tangible connection to eras before.”

In the case of the High Arctic, by venturing into the field researchers are finally able to record the existence of species and environmental conditions that would have continued to go unnoticed, much like the sea urchins in Cambridge Bay

Asked how scientists’ specimen collection efforts are informed by or are informing climate change research, Sokoloff said their work is critical for discovering and documenting not only what is there today, but also what goes missing in the future.

“Collections help us learn about trends in the future, but also about what we have unfortunately lost,” said Sokoloff.

“Once it’s gone, that biodiversity is just lost.”