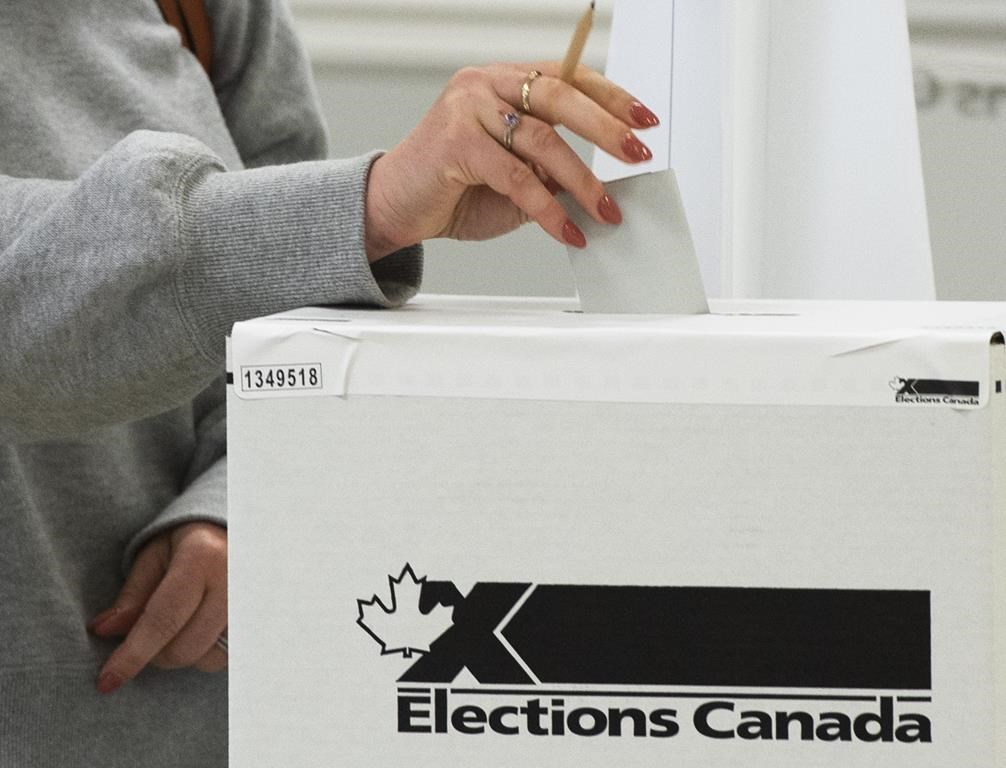 A voter casts a ballot in the advance polls, Friday, September 10, 2021 in Chambly, Que. Canadians voted in a federal election Sept. 20. (THE CANADIAN PRESS/Ryan Remiorz)

OTTAWA — Justin Trudeau’s Liberals were hanging on Monday to a commanding position in Atlantic Canada but modest Conservative gains in the region appeared to portend a nail−biter finish to the federal election campaign.

Early results had the Liberals leading in 23 of the 32 seats up for grabs in the four easternmost provinces — down three from the 2019 election, although some contests were very tight.

The Conservatives were leading in nine, up from the four they won in 2019, and were showing particular strength in Nova Scotia, where the provincial Liberal government was recently upset by the Progressive Conservatives.

But Bernadette Jordan, who served as fisheries minister, was running behind her Conservative rival in Nova Scotia’s South Shore—St. Margarets, evidently hurt by the lobster fishery dispute between Indigenous and non−Indigenous fishers in the region.

In Fredericton, N.B., Jenica Atwin, the former Green MP who defected to the Liberals last spring, was in a tight, see−saw battle with the Conservatives.

With polls suggesting a dead heat across Canada between the Liberals and Conservatives — neither of them within reach of a majority — every one of the country’s 338 ridings will matter.

Trudeau pulled the plug on his minority Liberal government on Aug. 15, a little less than two years after Canadians first reduced the Liberals to a minority.

He argued that Canada was at a pivotal moment in history and Canadians deserved a chance to decide how they wanted to finish the fight against COVID−19 and build back the shattered economy.

But the timing of his election call, coming as a fourth wave of the novel coronavirus was beginning to sweep the country, quickly sapped the good will Trudeau had built among Canadians for his government’s handling of the pandemic over the previous 18 months.

And it gave rival leaders an opening to attack Trudeau’s character, describing him as a selfish egoist who can’t be trusted to put the interests of Canadians ahead of his personal ambition to secure a majority.

Elections Canada said almost 6.8 million people voted early, most of them at advance polls over a week ago, and the rest through special ballots cast by mail or at Elections Canada offices.

Elections Canada had previously warned that the pandemic could lead to longer waits for voters compared to past elections. Public health protocols involve keeping people at a distance and collecting extra information for contact tracing purposes, which could take extra time.

The polling stations themselves were also likely to be farther away, as many schools and landlords opted out of hosting crowds of voters during the fourth wave of the pandemic.

Elections Canada encouraged voters to wear masks but only required them in places where they were mandated by provincial rules. Proof−of−vaccination regulations do not apply at polling stations in any province where they currently exist.

George Walker cast his ballot in Toronto Monday afternoon. He described the experience as “smooth,” and he called the safety precautions taken at the polling station “wise.”

“But it took longer than it has in the past, mainly because of COVID,” Walker said, adding he didn’t mind the extra 15−minute wait.

“I felt like it was very well organized,” Fernandez added. “No complaints at all.”

Most riding winners will be known by the end of the evening, but Elections Canada has warned it could take up to four days to finish counting all special ballots, meaning some close races may not have official winners for several days.