Mary Simon visit a ‘day of hope’ for Kangiqsualujjuaq

Last time a governor general visited in 2001, community was still healing from 1999 avalanche that killed 9 residents 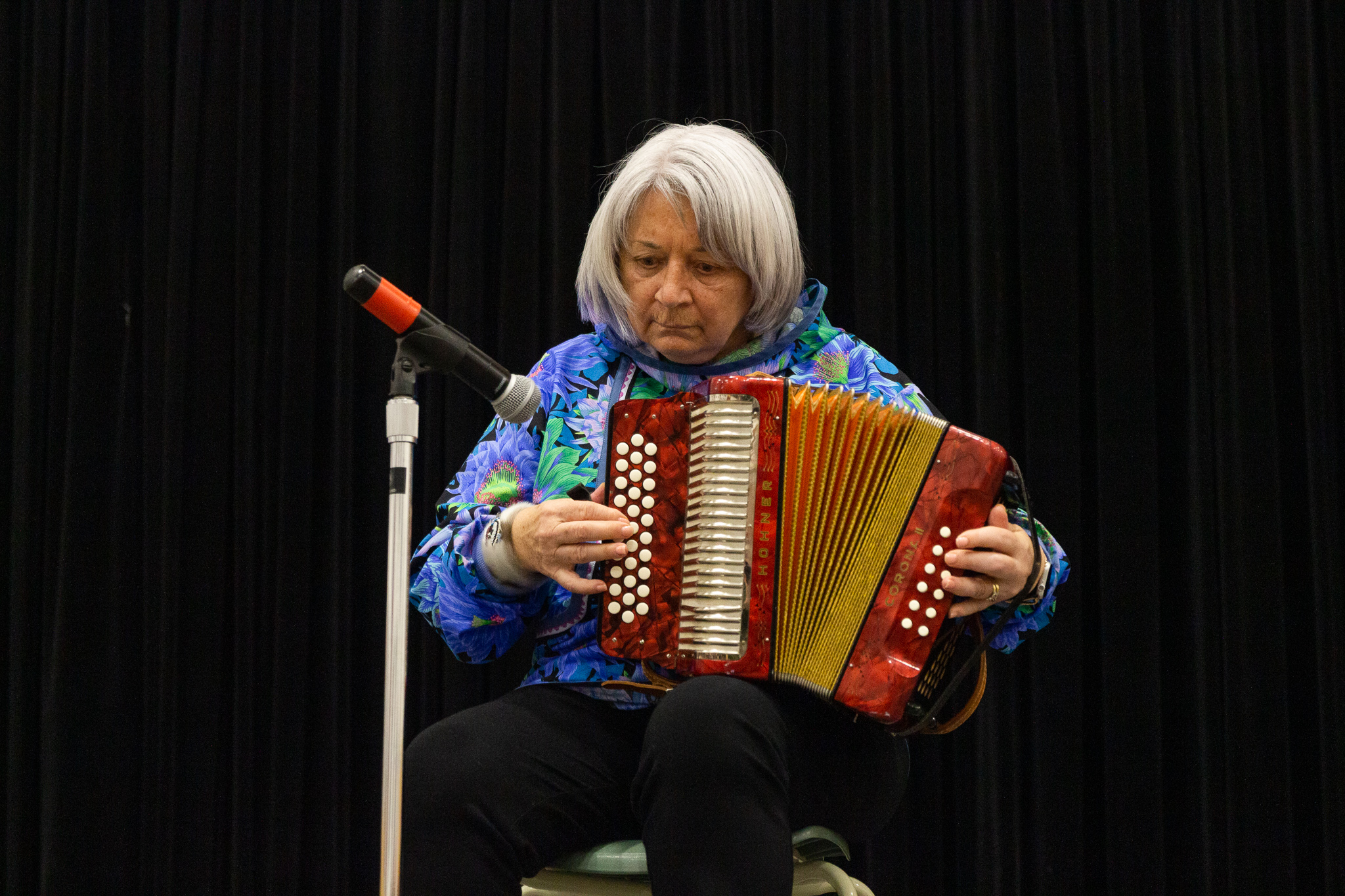 Playing the accordion, Gov. Gen. Mary Simon got the people of Kangiqsualujjuaq on their feet dancing on Tuesday, at the end of her visit to the community she first called home. (Photo by Jeff Pelletier)

The last time Kangiqsualujjuaq welcomed a visit from a governor general was in 2001.

Just over two years earlier, the community had suffered a major tragedy: nine people were killed, and 25 injured when an avalanche came crashing down on a New Year’s Eve party in the early hours of Jan. 1, 1999, after the countdown to midnight.

Although two years had passed, residents were still mourning the loss of their fellow Kangiqsualujjuamiut when then-governor general Adrienne Clarkson came to town in 2001, then-mayor Maggie Emudluk said Tuesday.

“Over the years, there’s been healing, and it’s been very difficult, the aftermath,” Emudluk said. “We lost nine community members.”

Two decades later, a governor general came to town once more. This time, it was Mary Simon.

With her husband, Whit Fraser, Simon returned to the first Nunavik community she lived in, having been born in the area before Kangiqsualujjuaq was fully established.

Simon and her entourage, as well six journalists, landed in Kangiqsualujjuaq Tuesday morning after a short charter flight from Kuujjuaq. After letting the media off the plane to line up their camera shots, Simon and Fraser descended from the small passenger aircraft.

They were greeted by a Canadian Rangers honour guard, 26-year-old Mayor McCombie Annanack and dozens of cheerful bystanders hoping to catch a glimpse of the Kangiqsualujjuaq woman who went on to become Governor General of Canada.

On the second day of her five-day swing through the North, Simon again had a busy day.

In Kangiqsualujjuaq, which has a population of about 900 and sits on the southeastern corner of Ungava Bay, Simon discussed local issues with the mayor and council at the northern village office.

After that, she spoke with students at Ulluriaq School about the importance of hard work, education and Inuit language. She then answered what she described as simple but important questions from students, such as what’s her favourite colour (it’s purple) and if she’ll say hi to Prime Minister Justin Trudeau for them when she gets back to Ottawa.

In the afternoon, Simon had lunch with elders and staff at the Qarmaapik Family House, an organization that provides crisis support to families and youth in the community.

After lunch, she and Fraser toured Kuururjuaq National Park interpretation centre, where she reminisced about her family’s early years in the community and admired some of the Inuit artifacts in the centre’s collection.

The day ended with a community gathering back at the Ulluriaq School, where Simon was showered with gifts and community members shared their gratitude for the day.

“It has been an absolutely amazing day for me, it has made me feel very welcome and loved,” Simon said. “I remember my roots every day, that’s what gives me the strength.”

Added Fraser: “You made it the most beautiful day for my wife, which means you did the same for me, so thank you all.”

After the formalities, the school played a video welcoming Simon back to the community, featuring old photos of residents and videos of Inuit hunters processing their catches.

The gathering ended with the gym being turned into a happy dance floor as local residents joined Simon, her staff and her security crew in celebration. After a few songs on the floor, Simon was handed an accordion, and she played for the joyful crowd.

After all was wrapped up, she and her staff shared their goodbyes and thanks to the community, and headed to the airport for a flight back to Kuujjuaq.

“Today was a day of hope,” Annanack told reporters as Simon and staff were headed toward the plane.

Emudluk, who was mayor during one of her community’s darkest moments at the time of the avalanche, echoed a similar statement. While the community still has some challenges, she said, Tuesday’s visit was a hopeful day for people in Kangiqsualujjuaq.

“It was a really happy moment, it’s really helping the spirit of the community,” she said. “Especially seeing one of our own in this position, the whole world knows Mary now.”

Simon’s tour of Nunavik continues Wednesday in Kangiqsujuaq, capped with a flight to Inukjuak where she and her staff will spend the night; however, those plans are subject to change due to inclement weather, Simon’s staff told reporters late Tuesday.

Her tour is due to wrap up Friday in Kuujjuaq.