New space a “win and a loss at the same time,” says Open Door’s director 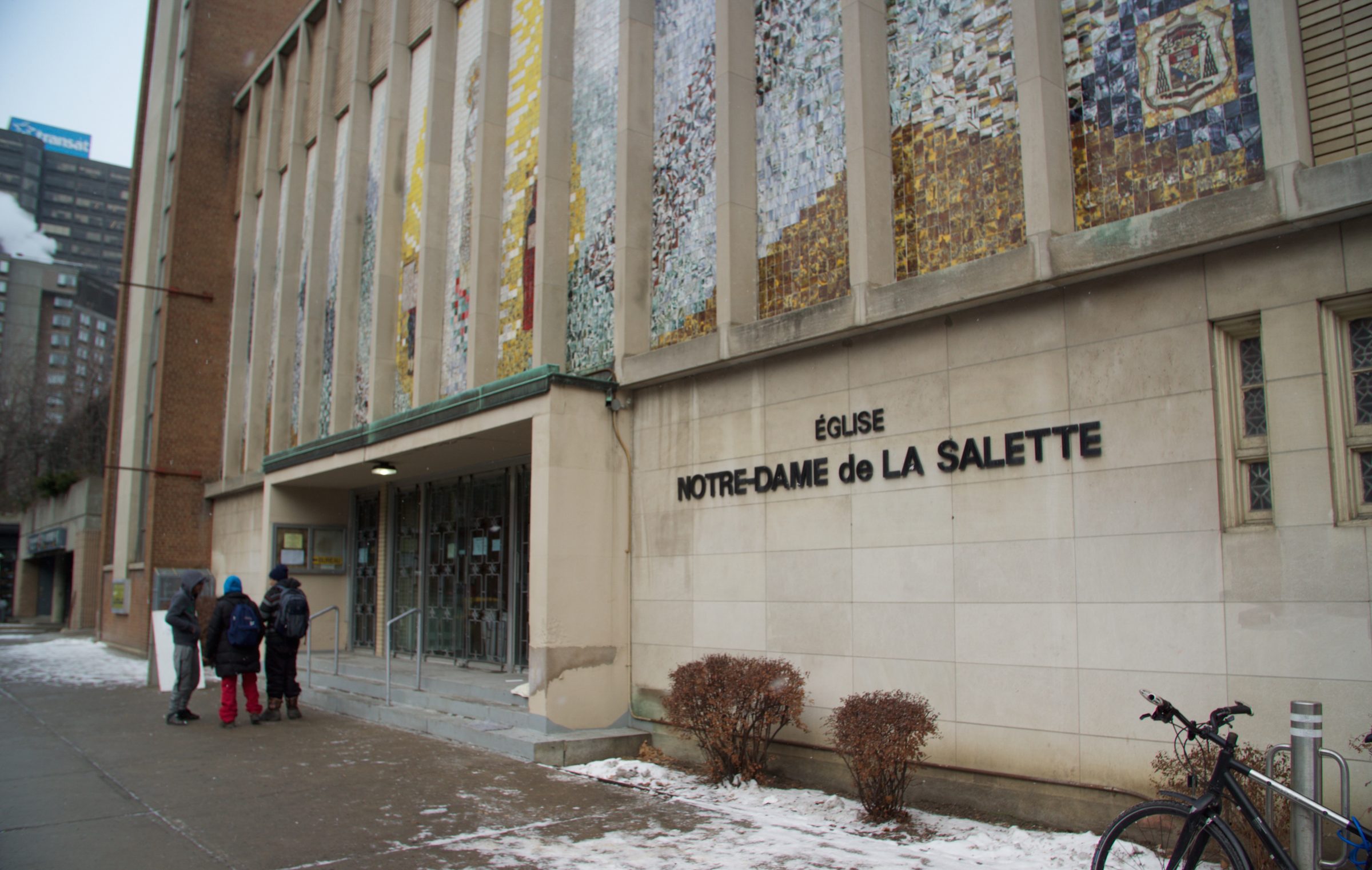 The Open Door, a Montreal drop-in centre that serves many Inuit clients, has moved to a new location in the basement of Notre Dame de la Salette church in the city’s Milton Park neighbourhood. (PHOTO BY DARYA MARCHENKOVA)

After a search that lasted nearly two years, a Montreal drop-in centre that caters to many Inuit clients is now at its new location in the city’s Milton Park neighbourhood.

The Open Door opened at its new site in the basement of Notre Dame de la Salette church, 3535 Park Ave., in early December.

It’s too soon to tell what impact its new location will have on the centre’s effectiveness in providing services to homeless and poor people, said David Chapman, the Open Door’s director. About 40 per cent of the Open Door’s clients are Inuit. 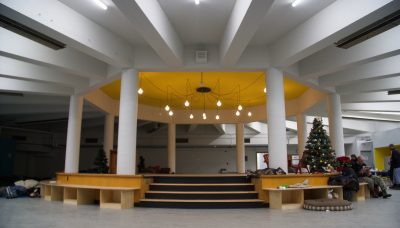 While the Open Door’s new location may not be ideal, the space itself is “more functional on every level than the previous space,” said director David Chapman. (PHOTO BY DARYA MARCHENKOVA)

“The real test will be six months down the road,” once the centre has the chance to see how many people use its services over time, Chapman said. But the new space has its advantages and challenges, he said.

Its location is the main drawback, said Chapman. For close to 30 years, the Open Door operated out of St. Stephen’s Anglican Church, a five-minute walk from Cabot Square, where many Inuit and other Indigenous people gather.

Last August, as the Open Door searched for its new spot, Chapman told Nunatsiaq News that the centre’s two requirements for their new home were a space with windows and light, and staying within easy walking distance of Cabot Square.

Neither need was met: the new location is in a church basement about a 40-minute walk from Cabot Square.

“Before there was a certain serenity in the space, where you were in this church with stained glass windows and high wooden ceilings,” Chapman said. “You almost felt that the space was asking something of you.”

As for the walk from Cabot Square, Chapman said that time would tell whether their former clients will travel to Milton Park from downtown. At St. Stephen’s church, the Open Door served an average of 125 people a day. One week after opening, Chapman said they were up to about 70 people a day, adding that “the numbers continue to grow each day.”

While some things about the Open Door have stayed the same, the centre is “more functional on every level than the previous space,” Chapman said.

Open Monday through Friday from 7:30 a.m. to 5 p.m., the centre still serves a daily meal—but now, their kitchen has a walk-in fridge and freezer. Mats are laid out around the space, where people can lie down and sleep. There are two bathrooms with multiple stalls, and there are showers, including one that accommodates a wheelchair. A week after opening, the laundry room was packed with coats and clothing. 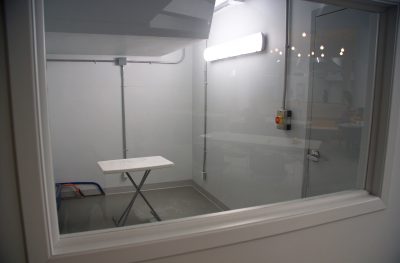 This ventilated room is dedicated to soapstone carving. (PHOTO BY DARYA MARCHENKOVA)

A new room is dedicated to soapstone carving and has a ventilation system, allowing its users to carve indoors year-round. There are five computer stations, up from three at St. Stephen’s.

In January, one room will be converted to a clinic where a nurse will see patients without any form of ID, Chapman said. Other private rooms include a space for an intervention worker to support people going through detox or rehab, and a room where people can store their belongings.

Chapman called the Open Door’s long struggle to find a new location both depressing and encouraging. Rents were often too steep in the spaces they checked out, he said, but they also met with reluctance or resistance from landlords, churches, local businesses and residents. “While you’re trying to find the money, you’re also dealing with attacks,” Chapman said.

At the same time, Chapman said, their strongest allies stepped up, from the Makivik Corporation to the Native Women’s Shelter of Montreal and others. Now, the Open Door has a five-year lease for its new home.

“We couldn’t have done it for ourselves,” Chapman said. 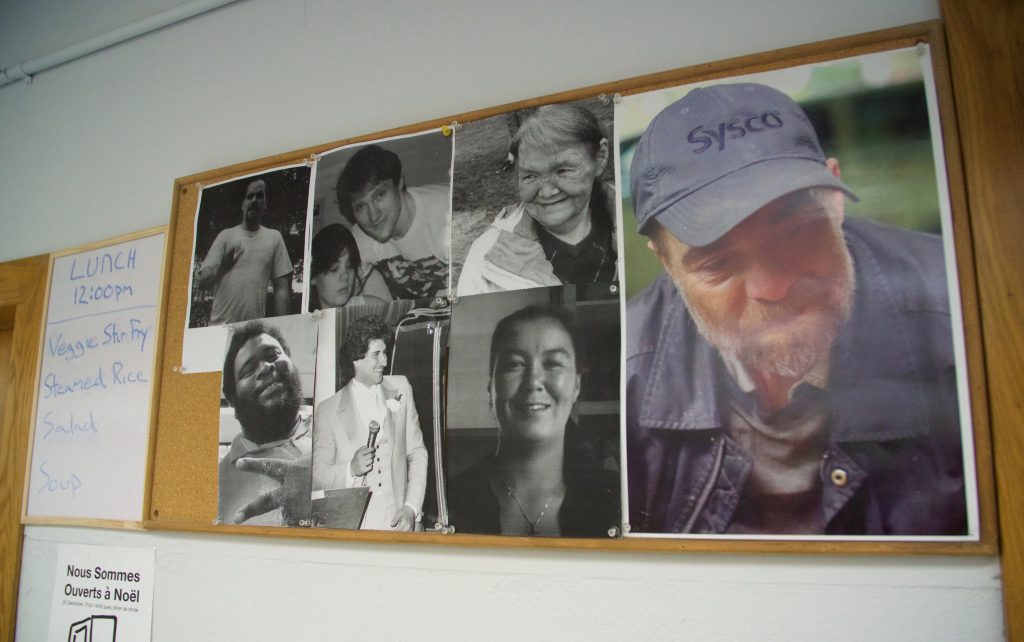 The Open Door holds memorials for regular clients who have died. Here, a memorial wall shows photos of some of these community members. “People liked having them up,” said David Chapman, the centre’s director. (PHOTO BY DARYA MARCHENKOVA)