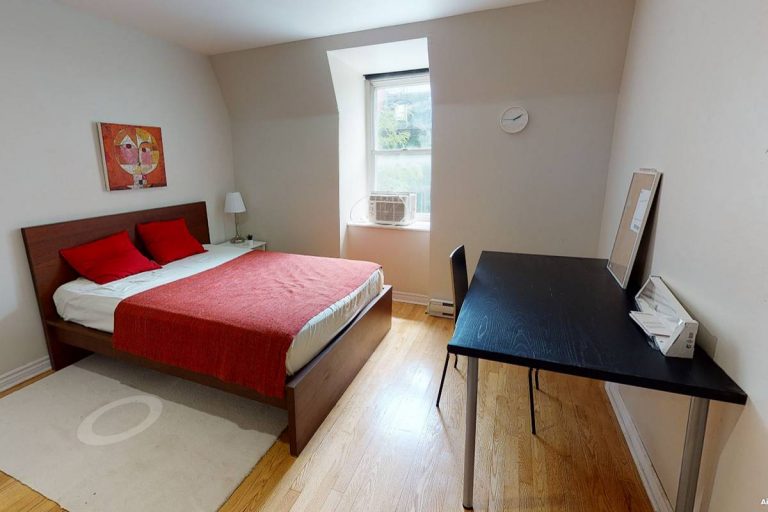 A view of one of the bedrooms in the new Montreal residence that’s home to six Indigenous participants in Projets Autochtones du Québec’s new managed alcohol program, the first of its kind in the city. Three of the participants are from Nunavik. (Photo courtesy of PAQ) 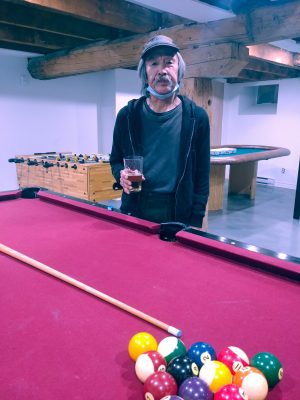 Simeonie Tuckatuck plays a game of pool at his new home in Montreal, which houses a managed alcohol program being piloted by Projets Autochtones du Québec. (Photo by Mark Alsop/PAQ)

For the first time in about five years, the 65-year-old has his own bedroom and a roof over his head.

Tuckatuck has lived in Montreal since he was evicted from the social housing unit he rented in his hometown of Kuujjuaraapik, but since he arrived he’s never had a place to call home.

Now, Tuckatuck is one of six tenants in a new residence, where he’s taking part in a managed alcohol program for Indigenous men — the first of its kind in Montreal.

The program is run through Projets Autochtones du Québec, or PAQ, a Montreal shelter that offers services to Indigenous men and women who are homeless or at risk.

“I had a very hard time when I moved to Montreal,” Tuckatuck recalled. “I wasn’t on welfare. I wanted to have a small apartment, but things didn’t go as I wanted to. So I stayed at the PAQ the whole time.”

In the summer months, Tuckatuck lived and slept outdoors, and that’s where he said he started drinking.

“Because it helped me to sleep outside,” he said. “If I were too sober, it would be a dull night. Drinking helped me to fall asleep.”

PAQ was operating a dry shelter, meaning once winter came and Tuckatuck needed a warm place to sleep, he couldn’t go in if he’d been drinking or inebriated.

Then last summer, PAQ piloted a damp shelter, allowing clients who’d been drinking alcohol to use its services.

“But there was still a gap, in terms of allowing drinking and working with people with severe alcohol dependencies,” she said.

“Experiencing homelessness with dependency … there are so many dangers there. You can go through withdrawal and even death.”

Earlier this year, PAQ opened the city’s first managed alcohol program targeted at homeless people. Following its mandate as a shelter, the program is for Indigenous participants, with room for up to eight.

Three of them are Inuit, originally from Nunavik, including Tuckatuck.

The spacious, shared home located in Montreal’s Ville-Marie neighbourhood has eight bedrooms, a shared kitchen, a games room, a patio and a communal beer fridge.

The program allows for controlled and supervised drinking in the residence, with a staff member always present. It is overseen by a Université de Montréal hospital doctor and clinical team, which helps determine each participant’s plan.

The goal isn’t to increase or even decrease someone’s drinking, Marini said, but rather to stabilize it.

“If someone’s in a peaceful and safe environment, and there’s no rush to buy the next bit of alcohol. Some do decide they want to decrease or stop,” she said. “But it’s not something that we force someone to do. It’s harm reduction.”

Many of the benefits of the program are absorbed simply by having a safe, quiet place to live, she said.

“It’s a very basic thing – comfort and peace, but it makes a huge difference,” Marini said.

‘I hope to find a normal life’

With any addiction, the need can be great. David Chapman, who works with the day shelter Resilience Montreal, said he had a client last summer whose alcohol addiction was so severe, they were drinking bottles of hand sanitizer.

There was no managed alcohol program in Montreal at the time, so Chapman drove the client to enrol in a similar Ottawa-based program.

“There’s definitely a need for this in Montreal,” he said. “What we’ve had, sadly, is just a lot of people falling through the cracks.

“It’s great that PAQ’s gotten something off the ground so quickly, and I’m sure there’ll be room for other programs.”

PAQ’s pilot project is funded for a year to start, largely through Service Canada, with some support from Makivik Corp.

Participants still pay rent: Tuckatuck is paying $270 a month for his room plus his own food.

But here, Tuckatuck said he’s already learned to sleep deeply and through the night, rather than catching a few hours of sleep here and there.

Once he’s better settled, he hopes to find work. Eventually, Tuckatuck wants to pay off his debt and return home to Kuujjuaraapik.

“In my stage of life, I’m in pretty good shape, so I don’t complain too much.”