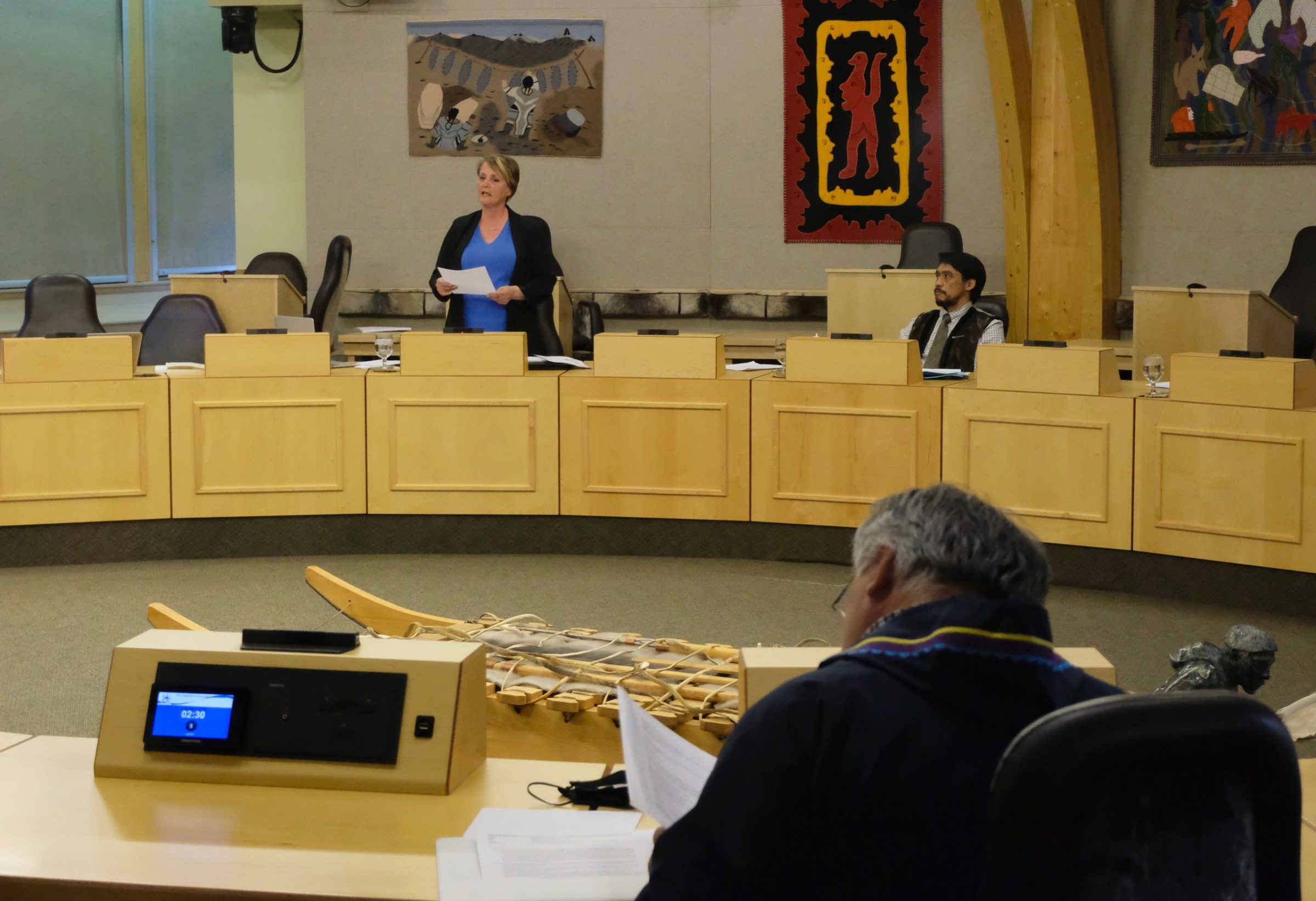 Several members of Nunavut’s legislative assembly defended their votes on Monday, following comments from ministers that eluded to MLAs not prioritizing elders’ care in the territory. (Photo by Mélanie Ritchot)

The second week of Nunavut’s spring legislature sitting kicked off with more debate over elder care in the territory.

Regular MLAs had voted on Thursday against spending $2.1 million on planning an elder care facility in Cambridge Bay, saying the money could be used more efficiently elsewhere.

That prompted accusations from cabinet ministers on Thursday that opponents of the project weren’t prioritizing the needs of elders.

“It is a slap in the face,” Pat Angnakak, MLA for Iqaluit-Niaqunnguu, said in response on Monday.

“To hear our ministers argue that voting to approve the motion means members do not support Nunavut-based elder care is a low blow.”

Tony Akoak, MLA for Gjoa Haven, made the motion to pull the funding on Thursday, saying the money could instead go towards expanding existing facilities, like the nine-bed centre in Gjoa Haven, or the facility in Arviat, instead of towards the $70 million project in Cambridge Bay.

The GN plans to build three long-term care facilities: one in Iqaluit, one in Cambridge Bay, and one in Rankin Inlet.

“There is no publicly available document that details these three regional facilities, where elders are going to be relocated from, how many elders will be relocated each year,” he said, adding the plan falls short in terms of consulting elders and communities.

Main said it’s not enough to keep elders in Nunavut; they also need to be able to age in their own communities.

Health Minister Lorne Kusugak said Thursday a long-term strategy with all the details is in the works.

He said he supports MLAs who want an elder care facility in every community, but “it is impossible to produce one in all of the communities right now.”

He said his first priority is getting the elders back to Nunavut.

“Shame on us for standing here and pounding tables and saying we care for elders,” Kusugak said before the vote.

“To take this planning money away from a Kitikmeot long-term care facility is definitely not a step forward,” he said.

“Elders are waiting in the south,” he said. “They are hurting and they are waiting for us.”

Jeannie Ehaloak, the minister of community and government services, said the $2 million requested this year would allow the rest of the planning process, including awarding a construction contract, to happen on time.

“Our beloved elders need this facility,” she said. “Any delay hurts them, hurts me, hurts everyone in this room.”

Finance Minister George Hickes said that delaying the design work will set back the facility’s opening by at least a year.

Responding to the ministers’ comments on Monday, Akoak also said “I’m happy that my fellow MLAs did vote beside me.”

“It is only because we do care for our elders.”

Calvin Pedersen, MLA for Kugluktuk, said he stands by his decision to vote against the funding on Thursday.

“It was implied the lack of support for part of the bill reflected a lack of care for our elders,” he said. “Nothing could be farther from the truth.”

“We are following the advice and wisdom passed onto us by our elders, who have told us we need to scrutinize proposed plans and projects in order to make good decisions.”

MLAs brought up past proposals for community elder facilities that have been shut down by the GN, including one in Kugluktuk.

“The government denied us that opportunity to provide more long-term care within our territory,” Pedersen said. “That would have been on its way to being built by now.”

Angnakak similarly brought up a past proposal for Iqaluit, which was developed with the city, the Nunavut Construction Corp. and other partners and volunteers.

“There has been no response to date,” Angnakak said. “Absolutely nothing.”

Amittuq MLA Joelie Kaernerk said when smaller communities submit their own proposals, “all we hear from this government is ‘wait, wait and wait some more.’”

The final vote came down to 12 votes to pass the motion to remove the funding from the proposal and eight votes to keep it.

All votes to withhold the funding were cast by regular members. Similarly, regular members led the push to delete proposed funding for a GN employee home ownership program last week, with most opposing votes coming from cabinet ministers.

Correction:
This story has been updated to correct the date of the vote, and leaders’ comments.