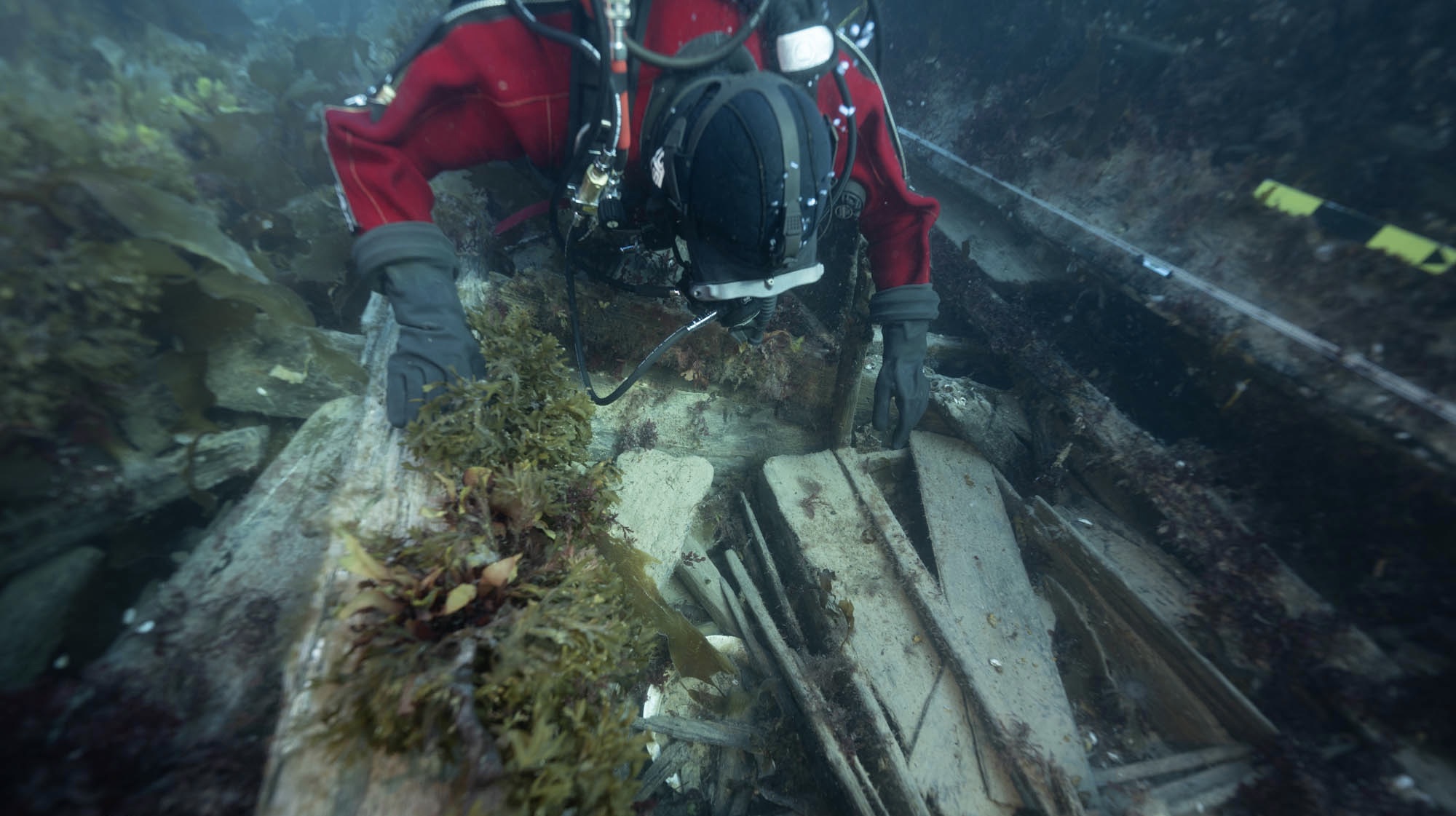 Parks Canada underwater archeologist Jonathan Moore observes a wash basin and an officer’s bedplace on the lower deck of HMS Erebus. The team of researchers conducted 56 dives over 11 days in September to the historic shipwreck from the 1845 Franklin Expedition near Gjoa Haven. (Photo courtesy of Marc-André Bernier/Parks Canada)

A corrective lens from a pair of eyeglasses. A leather portfolio with a quill still pressed inside. A peculiar fossilized rock, possibly a keepsake from worldly travels.

These are some of the more than 275 artifacts that underwater archeologists recovered in September from their latest diving expedition to the wreck of HMS Erebus, one of two sunken ships from the historic, ill-fated 1845 expedition led by Sir John Franklin.

They uncovered some “tantalizing” artifacts that offer a glimpse into the lives of the crew onboard, said senior underwater archeologist Ryan Harris.

HMS Erebus, along with HMS Terror, set sail from England on May 19, 1845, in search of the Northwest Passage with Franklin and 128 crew on board.

But they became stranded in thick, year-round sea ice northwest of King William Island near what is now Gjoa Haven. The crew never returned home.

HMS Erebus was discovered in 2014 and HMS Terror in 2016. In 2019, more than 350 artifacts were retrieved from the former, offering historians a never-before-seen glimpse into what may have happened on that doomed expedition.

This summer, Harris and his team excavated the cabin of the second lieutenant on HMS Erebus and what is believed to be the third lieutenant’s cabin.

They also completed an excavation of part of the captain’s steward’s pantry, potentially finding new insights into the personal lives of the crew onboard.

Harris said swimming through the submerged halls of a 19th century Royal Navy ship was one of the most “remarkable things” he’s ever done.

“What is enticing about these cabins is that materials are very well protected in the drawers below the beds to keep them safe. It allows us to detect and excavate remarkably delicate materials,” he said.

The corrective eye lens with a prescription could tell researchers something very personal about the person who occupied the cabin, Harris said.

And the leather portfolio from the captain’s steward’s pantry “still had a quill pen tucked into the front of it.”

“It was sticking out almost like someone was writing in their journal before bedtime and closed it shut and put it on their bedside table,” Harris said.

“It is tantalizing to think that it might have materials that specifically document the inventory in the pantry or to be something personal belonging to the captain’s steward.” 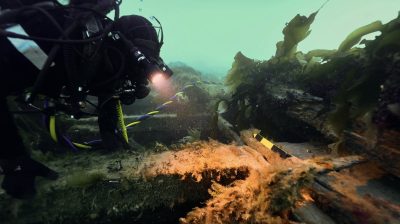 Other artifacts the team recovered include a decorative box for drafting, a piece of paper that may be infused with metal, and a box of officers’ epaulets, highly decorative gold-braided fixtures on the shoulders of a Royal Navy officer to indicate rank and status.

All the artifacts recovered so far are jointly owned by the Inuit Heritage Trust and the Government of Canada, and many of them can be viewed online at the Parks Canada website.

The wrecks themselves are the first collaboratively managed national historic sites in Nunavut, and there may be a chance to view some of the artifacts up close when Gjoa Haven completes the expansion on its community heritage centre.

“The disappearance of the Franklin Expedition mesmerized the Victorian world and led to a succession of desperate searches that, in the process, managed to chart much of what is now the Canadian Arctic archipelago,” Harris said.

It also led to many interactions with the Inuit, a seminal period in modern history, he said.

Historical records indicate Inuit did board the ships after they were abandoned and harvested tools and materials that could be useful, Harris said.

Just as interesting as the recovered artifacts are the ones that have not been found.

For example, the divers didn’t find much in the way of cutlery, like knives, but they discovered an “endless” collection of teams of ceramic earthenware, stacks of “beautifully patterned plates and serving dishes and platters.”

Those may not have been as useful for Inuit at the time, Harris surmised.

“Our hope is that in the fullness of time, we’ll be able to better understand these patterns of presence and absence of certain types of artifacts. When we come across the evidence, it’s an indication that certain materials were prized in particular,” he said.

The archeologists also noticed the deteriorating effects of climate change on the condition of the sites and have observed artifacts being moved around the ship, likely by storms.

“It is our belief that warmer temperatures caused by climate change is leading to situations where there’s less seasonal ice cover, and the periods in the summer where there is no overlying ice to protect the side of the HMS Erebus is likely exposing it to more weather influence than in the past,” Harris said.

That is why researchers are exploring HMS Erebus first — at 12 metres deep, the ship is more exposed to sunlight and weather conditions because it is closer to the surface of the water than HMS Terror, which rests 24 metres below the surface in a more protected bay.

“It doesn’t seem to be subject to the same forces of degradation as the HMS Erebus,” Harris said.

He hopes to revisit the wrecks again next summer for more recovery dives and is excited about eventually exploring HMS Terror.

“I think the manner in which the excavation and study of the two ships will parallel one another over time, I think, will be very, very fruitful,” he said.