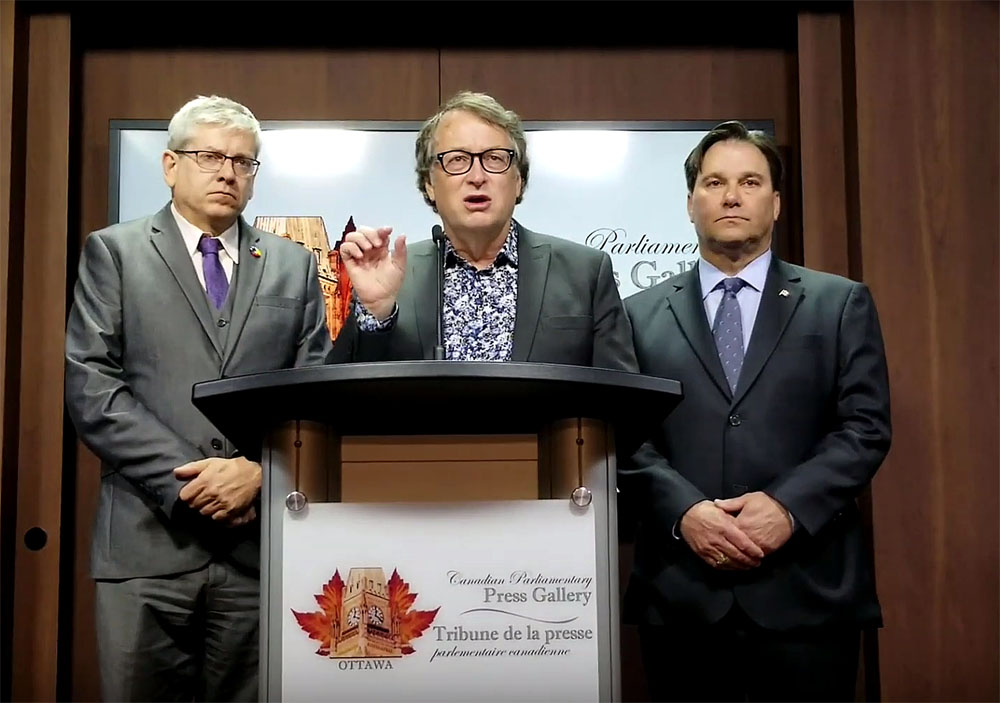 Jack Hicks (centre), an adjunct professor at the University of Saskatchewan who helped create Nunavut’s suicide prevention plan, speaks on May 2 at a press conference in Ottawa. With him are NDP MPs Charlie Angus (left) and Don Davies. Angus’s private member’s motion on the creation of a national suicide prevention strategy passed with all-party support. (Screen grab from Facebook video)

In a move partly influenced by work done by Inuit Tapiriit Kanatami and the governments of Nunavut and Quebec, members of all parties in the House of Commons said yes on May 2 to the idea of a national suicide prevention action plan.

They did so by voting unanimously in favour of a private member’s motion sponsored by Charlie Angus, the NDP member for Timmins–James Bay.

“It affects every community and every death is like a psychic emotional shockwave that tears families apart, tears communities apart and leaves the bereaved wondering about what they could have done,” Angus said in a speech urging colleagues to support his motion.

Angus cited Quebec’s suicide prevention strategy, which has reduced teen suicides by 50 per cent and reduced the overall suicide rate in Quebec by one-third.

But after Dan Vandal, the Liberal MP from Manitoba who serves as parliamentary secretary to Indigenous Services Minister Seamus O’Regan, rose to say the government supported the motion, it was clear it would pass.

“This of course is particularly important for Indigenous communities. Our government is working closely with Indigenous leadership to encourage and promote Indigenous-led strategies to address suicide prevention in their own communities,” Vandal said.

In its 2019 budget, the Liberal government agreed to spend $50 million over 10 years, and $5 million per year after that to help carry out ITK’s strategy.

But at the same time, Vandal said ITK’s strategy may not be a good fit for other Indigenous peoples.

To that end, he said the federal government is working with the Métis Nation to develop “a Métis Nation specific approach” to suicide prevention.

“We will continue to work together to build a Canada where we have a better understanding of suicide prevention and everyone has access to the help that they need and where all Canadians can live with dignity and hope,” he said.

Angus’s motion, written with the help of Jack Hicks, an adjunct professor at the University of Saskatchewan who helped design Nunavut’s suicide prevention action plan, calls for the following:

• The establishment of national guidelines for best practices in suicide prevention.

• Creation of programs aimed at filling in gaps in knowledge related to suicide and its prevention.

• Development of tools to promote safe and responsible reporting of suicide by media.

The motion also calls for a comprehensive analysis on how child sexual abuse and other forms of childhood abuse and neglect contribute to suicidal behaviour.

And it calls for an analysis of the barriers that Canadians face in gaining access to health, wellness and recovery services, including substance use, addiction and bereavement services.

“As a nation we have the obligation to put in place the tools to make sure that when they are hopeless, when they are in their darkest hour, if they make that call, there will be the support,” Angus said.