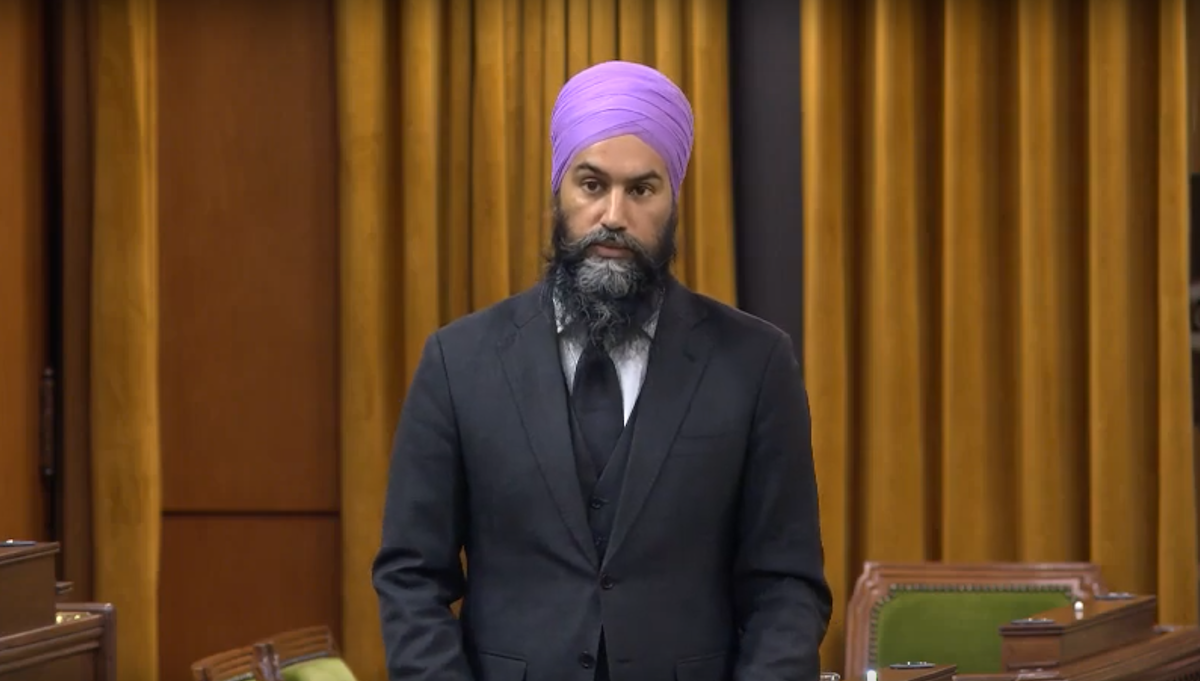 NDP leader Jagmeet Singh is calling on Prime Minister Trudeau to do more to help Nunavut with containing its COVID-19 outbreak. (Screen shot)

Singh made the demands in a letter to Prime Minister Justin Trudeau and in Parliament Wednesday.

He said he was speaking on behalf of  Nunavut MP Mumilaaq Qaqqaq, a New Democrat, who has been on an eight-week health leave since late October.

In the letter to Trudeau, Singh said that while Nunavut is going through one of the worst COVID-19 outbreaks in Canada — by population — the territory is also experiencing a housing crisis, increasing the risk of infection for Nunavummiut.

Nunavut’s Health Department said Thursday there are 150 active cases throughout the territory, which has a population of approximately 39,000 people. Five people have recovered since the territory’s first case was confirmed Nov. 6. No deaths have been reported in Nunvaut.

“Close proximity, unstable living conditions, and improper infrastructure, will only exacerbate the effects of the COVID-19 pandemic in Nunavut,” wrote Singh.

He drew on Arviat as an example of a community at risk, with the highest case rate in Nunavut and a large population of children.

“Many children, and in particular, Inuit children, live in overcrowded homes where the spread of COVID-19 could not be easily contained.”

The housing crisis in Nunavut has been on the NDP’s radar for some time, with Qaqqaq recently finishing a housing tour and promising a report on the “inhumane” housing conditions Oct. 2, before going on leave on Oct. 23.

Singh’s two main requests were that the Government of Canada immediately increase Nunavut’s testing capacity to trace every positive case of COVID-19 and that the government send masks to the Government of Nunavut to be distributed to people across territory who now need to wear them in public spaces.

In the House of Commons, Singh made a similar statement, calling on Trudeau to commit to doing “everything within his power to help protect the people of Nunavut.”

Trudeau, however, said the federal government has ensured northern communities have the resources they need from the beginning of the pandemic, including 3,792 rapid tests, 771,000 items of personal protective equipment and $143 million in federal funding.

“I’m in regular communication with the Nunavut government, I spoke to the premier last week and we’re continuing to assist the government any way necessary,” said Trudeau.