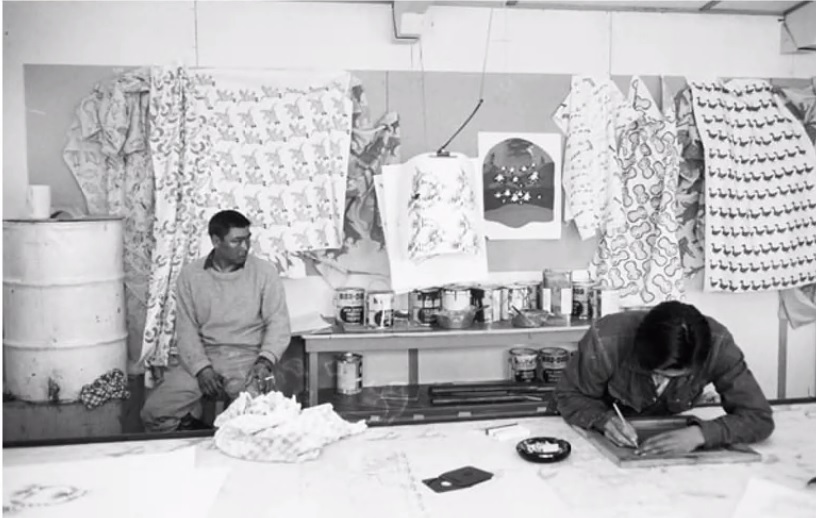 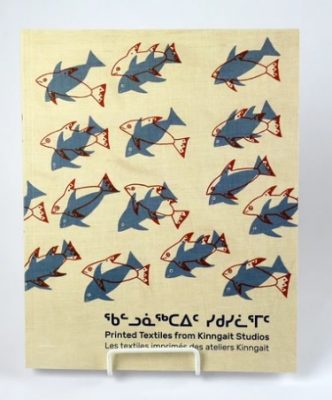 The newly released Printed Textiles from Kinngait Studios captures the story of a group of Inuit artists and printmakers behind the short-lived textile production operation in Kinngait in the 1960s.

A unique collection of patterned fabric produced in Kinngait in the 1950s and 1960s and its history have now been documented in a new catalogue released this week.

Printed Textiles from Kinngait Studios captures the story of a group of Inuit artists and printmakers behind the short-lived textile production operation in Kinngait, whose work is now on display in an exhibit of the same name at the Textile Museum of Canada in Toronto.

The new 168-page book, published in English, French and Inuktitut, was launched at an online event on Tuesday, Nov. 17.

Nunavut designer Martha Kyak spoke at the event. Her own work—including textiles she’s designed herself—is featured in the Kinngait exhibit. She said she has drawn inspiration from the work produced by Inuit artists in the 1960s.

Those artists drew what was around, she said, capturing the connectedness of nature. Kyak said she takes the same approach in her own designs.

“This is so timely,” she said. “It’s really an exciting time to be involved in Inuit art.”

Textile printing began at Kinngait’s West Baffin Eskimo Co-operative in the late 1950s, around the same time artists were experimenting with printmaking.

In 1963, southern artists taught the Inuit printmakers how to silkscreen fabric. Well-known Kinngait artists like Kenojuak Ashevak, Pitseolak Ashoona and Pudlo Pudlat had their work printed on fabric.

The textiles went on to be marketed by Arctic Co-operatives Ltd. across the country in the mid-1960s; they were so popular, they were featured at Expo 67 in Montreal.

But the program shut down the following year, likely due to the high cost of purchasing and shipping materials.

When some boxes of the fabric were discovered in the storage room at Toronto’s Dorset Fine Arts in 2017, curators couldn’t initially identify the pieces’ original artists.

The catalogue documents all of that, and more, including essays by Inuit art curators and historians, interviews with artists, artists’ biographies, and full-colour images of some of the textiles.

“It was our goal to create a publication that will honour the artists and printmakers and their remarkable designs, and to recognize the place and importance of the textile printing initiative in the history of Inuit graphic art,” said Roxane Shaughnessy, senior curator at the Textile Museum of Canada.

“We hope it will be a useful resource and inspire others to continue the research.”

You can order the new catalogue, plus prints, from the Textile Museum of Canada’s online shop.