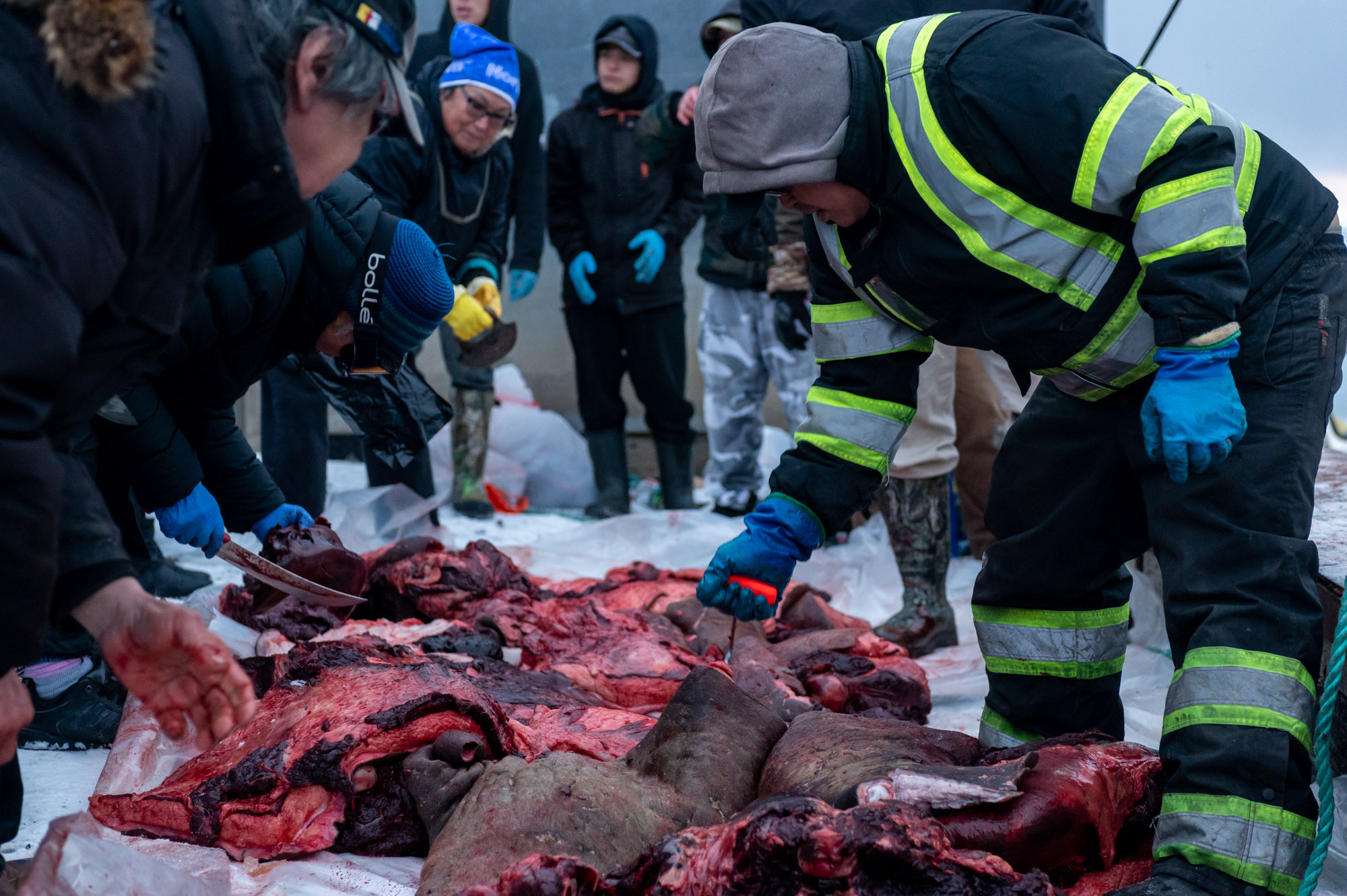 A crowd of people in Iqaluit gather around to welcome a local walrus harvest in October 2020. A new ITK report notes that Inuit Nunangat is home to a rich bounty of local food, although harvesting of wildlife, or country food remains inaccessible to many families who don’t have the tools or transportation to hunt. (File photo by Dustin Patar)

Canada’s national Inuit organization has unveiled a new plan to tackle hunger across the North that calls for major government investment and strengthened Inuit control over their food systems.

The strategy documents what drives that problem, including poverty, a major transportation infrastructure deficit across the North — which limits how food reaches Inuit communities — as well as a lack of focus on locally produced foods.

In response, the strategy lays out a series of solutions, from serious investments in marine, air and harvesting infrastructure to cost-of-living subsidies and more Inuit-led food programs.

“Governments have stood by for far too long, prioritizing incremental actions and investments that do not remedy the root causes of food insecurity,” he states.

“Grassroots movements in Inuit Nunangat … have succeeded in focusing national attention on this issue. However, not enough has changed as a result of these efforts and too many of our people continue to struggle.

“This reality is unacceptable and must be changed.”

The report points to poverty as the biggest factor in the access to food. The median annual income for Inuit adults is $23,483, compared to $92,011 for non-Indigenous people living in Inuit Nunangat, and $34,604 for Canadians as a whole.

Inuit spend a disproportionately large share of their income on food and meals compared with other Canadians, according to the new report. A Northern Food Basket — what it costs to feed a family of four for one week — can cost upwards of 30 per cent of a Northern Inuit household income, compared to just 14 per cent of a southern Canadian income.

The vast majority of the foods Inuit consume are shipped thousands of kilometres from southern retailers, which is responsible for the high cost of groceries across the North.

The report highlights the extent to which Inuit communities rely on both air and marine transport to access food, but that its “aging and inadequate” infrastructure only creates more barriers to food shipping.

Most communities have very basic marine infrastructure, if anything at all, the report found, meaning resupply ships must rely on smaller vessels to transfer goods to land. Local harvesters must anchor their boats in open water, which puts them at risk at being damaged.

But despite Inuit communities’ reliance on southern-shipped foods, the report notes that Inuit Nunangat is in fact home to a rich bounty of local food.

Harvesting of wildlife, or country food, however, remains inaccessible to many families who don’t have the tools or transportation to hunt.

And much of that commercially harvested wildlife leaves the North — shrimp, turbot and char make up the Canadian Arctic’s biggest exports — which the report says brought in $18 billion in revenues over the last 30 years.

The Inuit Nunangat Food Security Strategy offers 33 recommendations and action items, largely targeted at the federal, provincial and territorial governments that oversee the country’s 53 Inuit communities. Among them:

The strategy also calls on Inuit to be at the forefront of developing any food policies and programs in their own regions.

“We must make a shift from thinking about food security to food sovereignty,” she said. “It means empowering Inuit to feed our own communities.”

The strategy was developed by ITK along with its member organizations: Nunavut Tunngavik Incorporated, Makivik Corporation and the Nunatsiavut Government, the Inuvialuit Regional Corporation, as well as the Nunavik Regional Board of Health and Social Services, Inuit Circumpolar Council Canada, Pauktuutit Inuit Women of Canada, and the National Inuit Youth Council.

ITK said the strategy’s implementation will be led by the Inuit Crown Partnership Committee.

The strategy can be found here.

A new report by ITK revealed that food insecurity is highest in Nunavut and Nunavik, at 77 per cent, and slightly lower at 68 per cent in Nunatsiavut and the Inuvialuit Settlement region. There is currently no Inuit Nunangat-wide data about the prevalence of food insecurity among Inuit children under 15 years of age, although the 2007-2008 Inuit Health Service suggested they are particular vulnerable. (Graph courtesy of ITK)