“I am committed to working towards solutions for northerners, by northerners.” 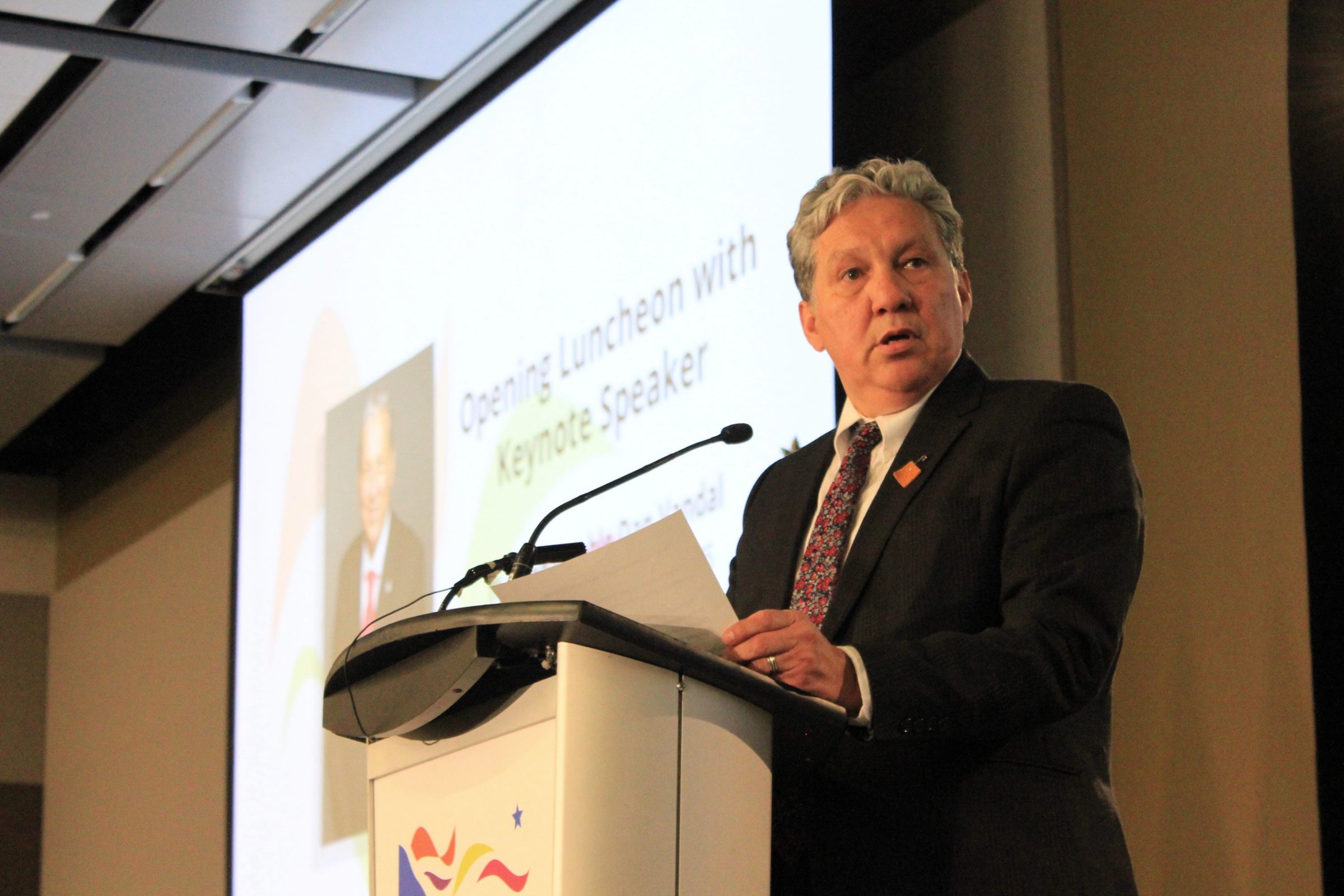 Canada’s first-ever dedicated minister for northern affairs, Dan Vandal, told delegates at the Northern Lights conference in Ottawa on Wednesday, Feb. 5, “too often in the past, northerners have not been recognized as full partners in the decisions which directly affect them.” (Photo by Lisa Gregoire)

If his speech at this year’s Northern Lights conference is any indication, Canada’s first-ever dedicated minister for northern affairs is going to be really busy over the next few years.

Barely two months into his new cabinet post, Dan Vandal, a member of the Métis Nation from Winnipeg, stood before hundreds of well-fed conference delegates on Wednesday, Feb. 5—many of them northern leaders and business people—and basically told them: Don’t worry. I’m listening, I’m collaborating and I’m delivering.

“Too often in the past, northerners have not been recognized as full partners in the decisions which directly affect them,” said the minister, at Ottawa’s downtown conference centre. “I am committed to working towards solutions for northerners, by northerners.”

That includes following the goals and principles outlined in the new Arctic and Northern Policy Framework that was released last September and serves to guide the federal government’s “priorities, activities and investments in the Arctic to 2030 and beyond.”

While that framework appears to have been drafted under challenging circumstances and significant stakeholder compromise, Vandal said his government is ready to move from “co-development,” to “co-implementation,” by establishing governing mechanisms and implementation plans to “bring those priorities to life.”

This is likely welcome news to northerners, since the framework contained no specific implementation schedule or timeline for results.

Vandal did garner a smattering of applause early in his speech by talking about Nunavut devolution.

Last August, the federal government, the Nunavut government and Nunavut Tunngavik Inc. signed a devolution agreement in principal, something Vandal called “an incredible milestone 25 years in the making.”

Devolution is a federal policy by which Nunavut will eventually take on more province-like control of governance and resources.

“The government and the people of Nunavut will soon make all the decisions about, and take greater control over, the territory’s lands and the territory’s resources. That is how it should be, putting the decision-making in the hands of those that live there,” he said.

A few delegates smiled and raised their eyebrows, doubtful, perhaps, of what will happen when the eternally under-capacity GN is given even more governing responsibilities, and complex ones at that. But many people cheered the idea of homegrown control.

Vandal went on to speak about climate change—“the single most important issue we face”—as well as economic growth, northern infrastructure, language preservation, reconciliation and broadband funding, sprinkling his words with the many multi-year, multi-million-dollar commitments his government has made to pay for all those things.

So Vandal’s speech was like a recap of Liberal promises with very little news.

He also talked up the federal government’s commitment to spend $47.5 million over five years on the new Nunavut Recovery Centre, set to be built in Iqaluit by 2023. Ottawa will also spend $9.7 million annually on the centre’s operating costs.

Iqaluit Mayor Kenny Bell, who heard Vandal’s speech, said the addiction treatment centre is long overdue and he’s disappointed it will take so long to get it up and running, “but at the same time, there are a lot of steps that need to be done,” Bell said. “Hopefully they’ll get it right. You don’t want to get this wrong. And I’m hopeful it will be beneficial when it’s done.”

Bell, who met privately with Vandal earlier this week in Ottawa, said, like himself, Vandal is new to his job and is still getting up to speed on the many pressing issues in his portfolio. Bell said he raised Iqaluit’s desperate need to upgrade its water supply system and that Vandal suggested some promising federal funding sources.

“His job is huge and probably overwhelming, but he met with me and so I have to give him respect for that,” Bell said. “I’m really looking forward to seeing what happens over the next four years.”

The Northern Lights conference continues at the Shaw Centre in Ottawa until Feb. 8. Along with workshops and panel sessions, the event features an arts and cultural pavilion and trade show, both of which start today. Find out more here.