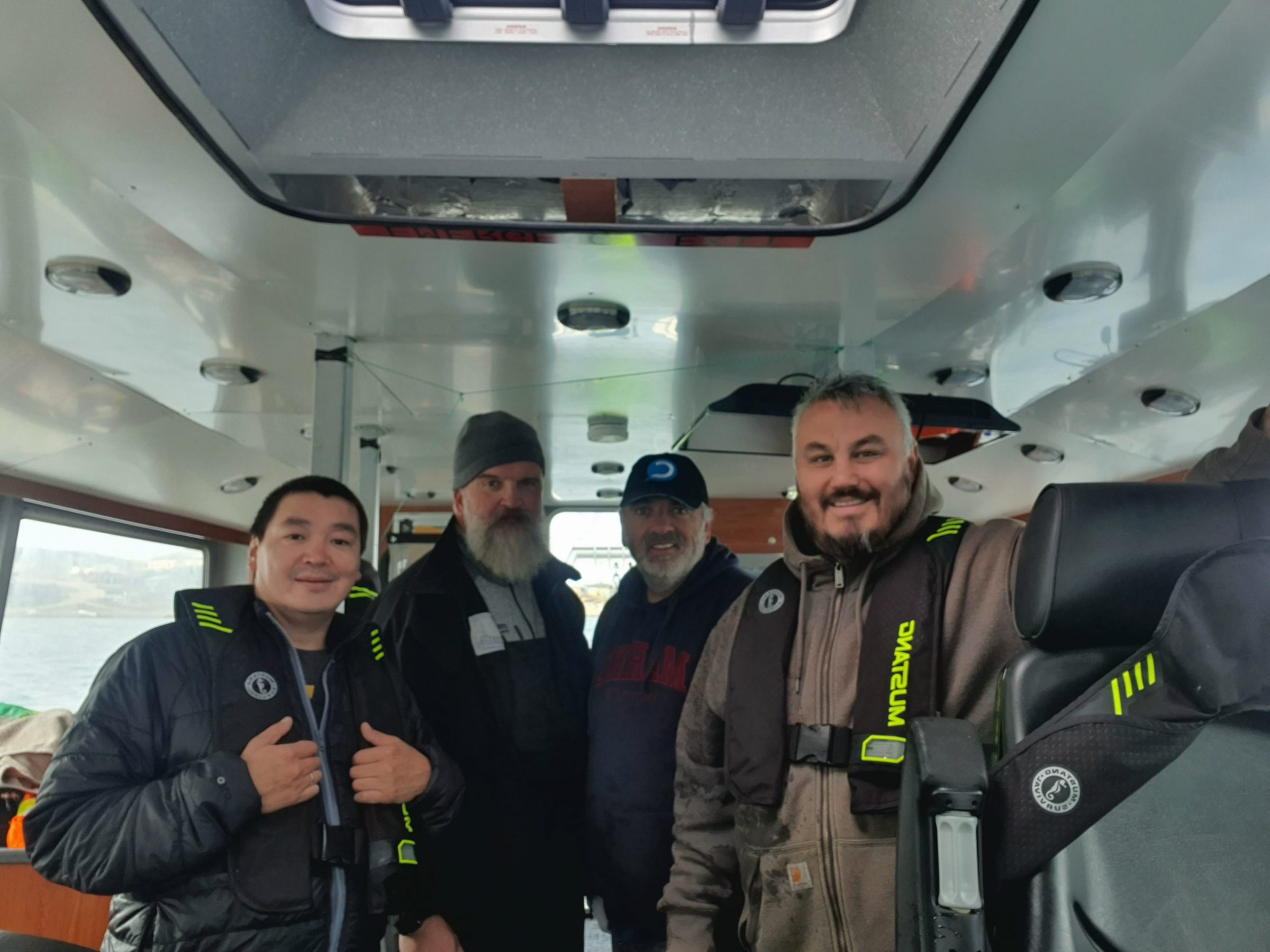 As Ted Irniq was sailing around the northern tip of Labrador recently, he and his three other crewmates spotted tracks on the ocean floor, left by grounded icebergs.

“The most interesting thing we’ve seen so far,” he said, joking that he has yet to spot a shipwreck.

Irniq is a technical trainee on the RV Ludy Pudluk, a new $2.6-million research vessel, owned by the Qikiqtaaluk Corporation, that arrived in Kinngait last weekend.

The team was mapping the ocean floor on its way from St. John’s, NL, to do inshore fishing research around communities in the Qikiqtani region of Nunavut.

They plan to conduct their research in Kinngait and Sanikiluaq this year and do the same work in Sanirajak and Igloolik next year. The larger goal is for Inuit communities to do the research independently on their own vessels, according to Jerry Ward, director of fisheries for the Qikiqtaaluk Corporation.

The hope is the Ludy Pudluk, built in 2018 in partnership with several federal government agencies and the Nunavut government, will help build that capacity.

The vessel was named after politician Ludy Pudluk, originally from Pond Inlet, who served 20 years in the NWT legislature and who was a long-time member of the Qikiqtaaluk Corporation’s board of directors. Pudluk died in 2019.

With a white top and blue bottom the Ludy Pudluk is a catamaran, which is a wider type of boat with two hulls. Ward says the catamaran build was chosen because it can hold all the required scientific equipment on board.

Irniq has been boating since his childhood in Rankin Inlet. After taking a couple extra boating courses, he became one of two Inuit trainees on the Ludy Pudluk.

Irniq is joined by fellow Inuit trainee Maatiusi Manning, who is from Kinngait, as well as researcher Philip Walsh and Capt. Kirk Regular.

Working with Inuit traditional knowledge, Ward says the team is exploring what species are in the Qikiqtani region, such as crabs, sea urchins, scallops, mussels and various fish.

To find out this information, they are using cameras and a technique called potting. That’s where the crew drops cages — or pots as they are called — into the water with bait. Once fish are in the cages, they cannot escape.

Irniq says they are dropping the pots to depths of 60 to 300 metres and use pieces of squid as bait. 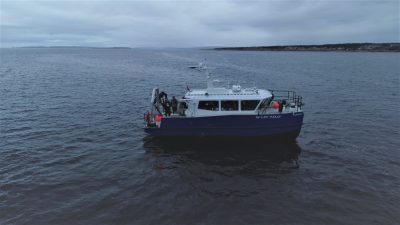 The RV Ludy Pudluk is expected to do fishing research in Kinngait and Sanikiluaq this year then Sanirajak and Igloolik in 2022. (Photo courtesy of Qikiqtaaluk Corporation)

The crew is also mapping parts of the ocean floor, using a device called a transducer, an object that attaches to the front of the boat, gets lowered into the ocean and uses sound frequencies to collect data.

“This will give us a better understanding of what’s under [the sea’s surface] and why the ocean acts a certain way,” Irniq said.

The Qikiqtaaluk Corporation plans to give two more boats from Qikiqtani communities additional research capacity this year. Each boat will have a crew of two Inuit community members and a technician from Memorial University’s Marine Institute.

One crew member on each community boat will be a current trainee on the Ludy Pudluk, resulting in five Inuit getting employment on research vessels. The Ludy Pudluk will act as the lead vessel.

Ward hopes trainees like Irniq will eventually become captains or researchers, with other Inuit from the Qikiqtani region becoming the new trainees.

“It’s all about community capacity building,” he said.

Irniq is also optimistic about Inuit communities doing this type of work. He points out that people from Nunavut are already prepared for the logistical challenges that operating a research vessel entails, such as managing fuel and supplies as well as packing for long journeys.

“We’ve done it for thousands of years,” he said.