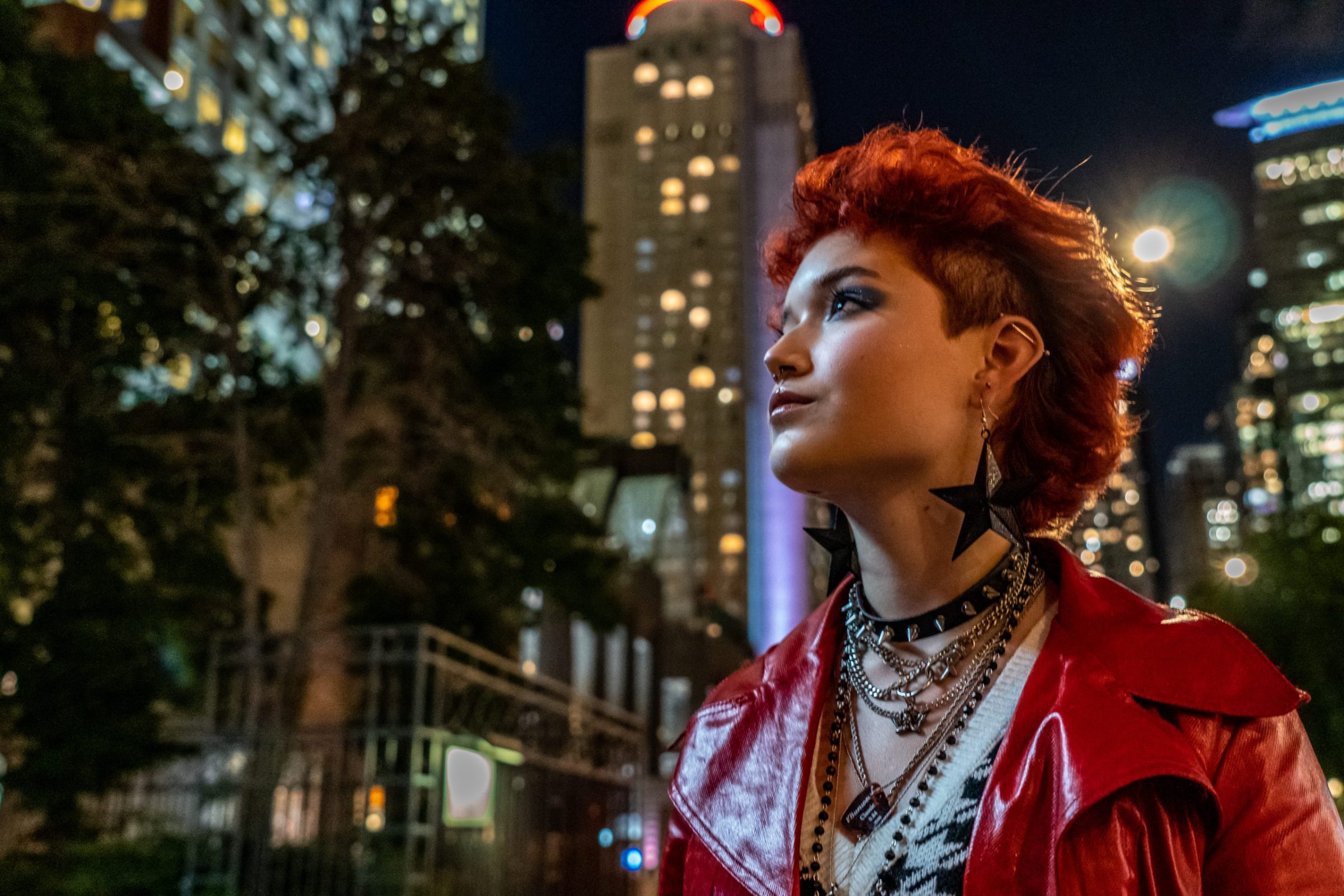 It doesn’t take bravery to talk about “something that feels normal to me,” says Kuujjuaq musician Niivi Sinuupa, who accidentally outed herself on stage during her first solo performance at the Aqpik Jam music festival in August. After that debut, she sat down to talk about the start of her musical career. (Photo by Cedric Gallant) (Photo by Cedric Gallant, special to Nunatsiaq News)

With her flamboyant jackets and confident walk, jewelry and expressive colours, Niivi Sinuupa stands out in any crowd.

“I strive to walk into a room, where people look at me be like, ‘that is a rock star right there,’” she said in a recent interview, talking about her budding music career.

It took a big step forward in August when she performed solo for the first time onstage at Kuujjuaq’s Aqpik Jam music festival.

The up-and-coming Nunavimmiut punk rock artist began her strides into the artistic world with confidence, backed by a strong purpose, at the young age of 14.

Her music is hard-hitting, and her messages leave no stones unturned.

“I try to teach people about colonization, racism, sexism, homophobia and transphobia … I want to teach people to be more open-minded, and I try to convey a strong message in each of my songs.”

She describes her work as “rock and roll, but I always add a splash of punk to it.”

She chose those genres, she said, because “they resonate with me the most.”

With inspiration from musical movements like the iconic feminist punk band riot grrrl, Sinuupa said “the change that music can bring to the world is powerful, and I’d like to accomplish that with my own art.”

The way she conceptualizes her messages is usually through extreme emotions.

“It happens very randomly,” she said, adding her eureka moments occur “when I am feeling an emotion very strongly.”

When that happens, she pulls out her notepad and “writes a bunch of lyrics as fast as I can.”

When the dust has settled, “I read through all of it again, I organize the lyrics, and create a cohesive song.”

Then it’s all about building a melody around the words. 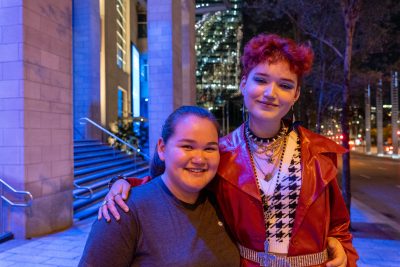 Kuujjuaq musician Niivi Sinuupa, right, poses with her cousin Kathy Aputiarjuk, one of the budding musician’s inspirations, during a visit to Montreal in the summer. (Photo by Cedric Gallant, special to Nunatsiaq News)

That process was built on trial and error, and advice from another Nunavimmiut artist.

Her father, Etua Snowball, was her first inspiration.

“When I was very young, I saw him on stage for the first time. I think that’s when I knew that I wanted to be an artist, a musician,” she said.

Her cousin, Kathy Aputiarjuk, “is a really big inspiration,” she added, because “she writes in Inuktitut, and it is something that I would like to accomplish one day.”

As Sinuupa got older, she also received advice from popular Inuk musician Elisapie, who helped her with her career and music.

With her artistic identity, her message and her musical talents well in place, she hit the big stage for the first time as an established musician this summer at Kuujjuaq’s Aqpik Jam Festival.

It was a challenging learning experience.

“When I performed, I had not really thought it through completely,” she said. “I accidentally outed myself to the entire town by performing a lesbian song.”

The crowd had a mixed reaction. 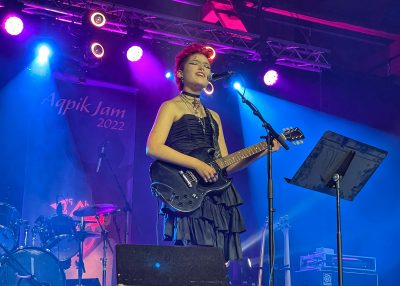 Niivi Sinuupa, a 14-year-old budding musician from Kuujjuaq performs solo for the first time at the Aqpik Jam music festival in Kuujjuaq in August. (Photo courtesy of Isabelle Dubois)

“Some people left immediately when I had mentioned that the song was about a girl, and some people were also proud of me and cheering me on,” she said.

But the positive reactions stung more.

“It made me feel quite frustrated, because after my show people were coming up to me saying that I was brave for what I did … I did not feel an ounce of bravery.”

Sinuupa said that experience taught her she shouldn’t have to be brave to talk about “something that feels normal to me.”

That performance — and the reactions to it — is what motivates her to talk about oppression.

“No one else should need bravery to talk about something that is part of them, and people should be more accepting of that and support each other as a community,” she said.

“I intend on continuing to advocate for the LGBTQ + community,” she said. “Being queer myself, I strive to be the representation that a lot of native LGBTQ+ don’t have.”

Sinuupa is working on her debut album. Its release date is yet to be confirmed.

She said she just wants to “make people feel more comfortable in being themselves. Which is why I dress so loudly, because I am very proud of myself.”