Nunavik Inuit who go out on the land less prone to substance abuse, research suggests 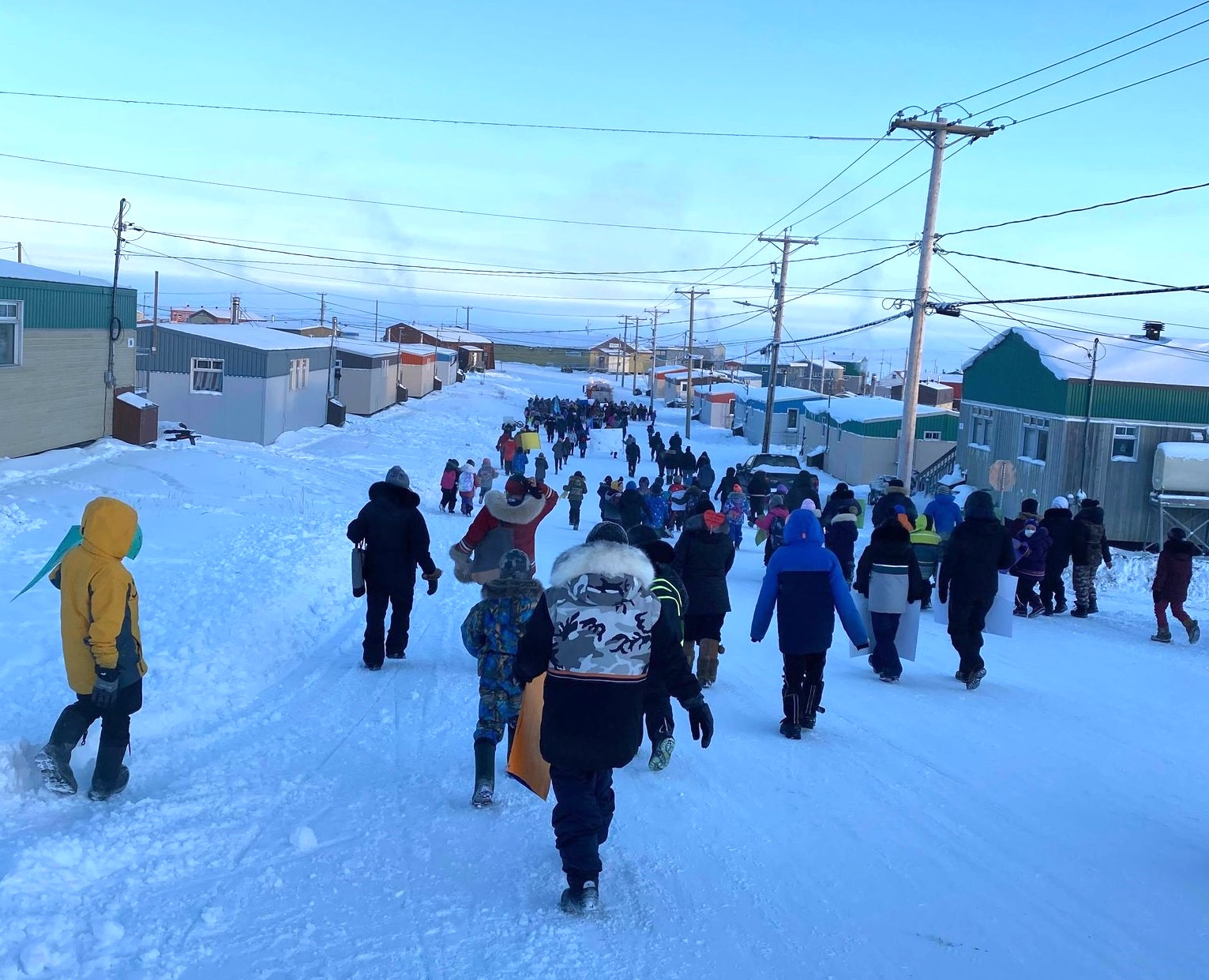 Concern over the rising use of alcohol and cannabis, as revealed by the 2017 Inuit health survey — Qanuilirpitaa? — prompted Puvirnituq to declare a sober month in November. Here, residents take part in a parade to start the month. (Photo courtesy of L. Qalingo Aupalu)

The results of a 2017 Inuit health survey in Nunavik suggest on-the-land and community activities are linked to less alcohol and cannabis use.

Researchers surveyed around 1,300 Nunavik residents over the age of 16 through the project, which is called Qanuilirpitaa? or “How are we now?”

It’s the second survey, following one in 2004 titled Qanuipitaa? or “How are we?”

According to the data, more Nunavimmiut were binge drinking in 2017 than in 2004.

There is “no single cause” behind who uses or doesn’t use alcohol or drugs, said Laval University public health researcher Natalia Poliakova last week at the ArcticNet conference. She gave a presentation during a Dec. 10 session on health, well-being and the social determinants of health in the North.

She said the survey showed Nunavimmiut who had more social and community support were more likely to engage in binge drinking, but volunteering and activities such as going to church were linked to a decrease in the behaviour.

As for why this could be the case, the Qanuilirpitaa? section on substance use suggests “the finding that higher social support was associated with more frequent alcohol consumption and binge drinking in Nunavik could be explained by greater access to alcohol and more opportunities to drink among individuals with a larger social circle.”

The Qanuilirpitaa? survey found 63 per cent drink of Nunavimmiut drink once a month and of those, about three in four reported at least one episode of binge drinking — five drinks or more in one occasion — in the year preceding the survey.

Weekly binge drinking has also become more common. This was the case among both sexes, residents of the Hudson coast and adults aged 21 to 54, the survey found.

Those who reported binge drinking were more likely to be employed, had at least some secondary school, an income more than $20,000 and lived in large communities.

One in three Nunavimmiut use cannabis daily

The survey found that the same percentage of Nunavimmiut use cannabis as alcohol: 63 per cent.

“More than half of the population of Nunavik uses cannabis, making it the most popular drug,” Poliakova said.

As well, about one-third of Nunavimmiut reported daily use of cannabis, with men being significantly more likely to report daily cannabis use than women.

A greater proportion of residents of the Hudson coast communities also said they used cannabis daily compared to those on the Ungava coast.

It’s more popular among youth. Men and women under 21 years old were more likely to report daily cannabis use, as were single people.

This was also the case of individuals with a lower income, the survey said.

Going out on the land was associated with a lower cannabis use among Nunavimmiut.

Lifetime use of solvents — glue, gasoline or propane — was reported also by about a third of Nunavimmiut.

At the same time, there are few resources for Nunavimmiut who want to overcome addictions.

The Isuarsivik Regional Treatment Centre in Kuujjuaq suspended its residential services for much of 2020, though a new, expanded recovery centre is set to open in 2023.