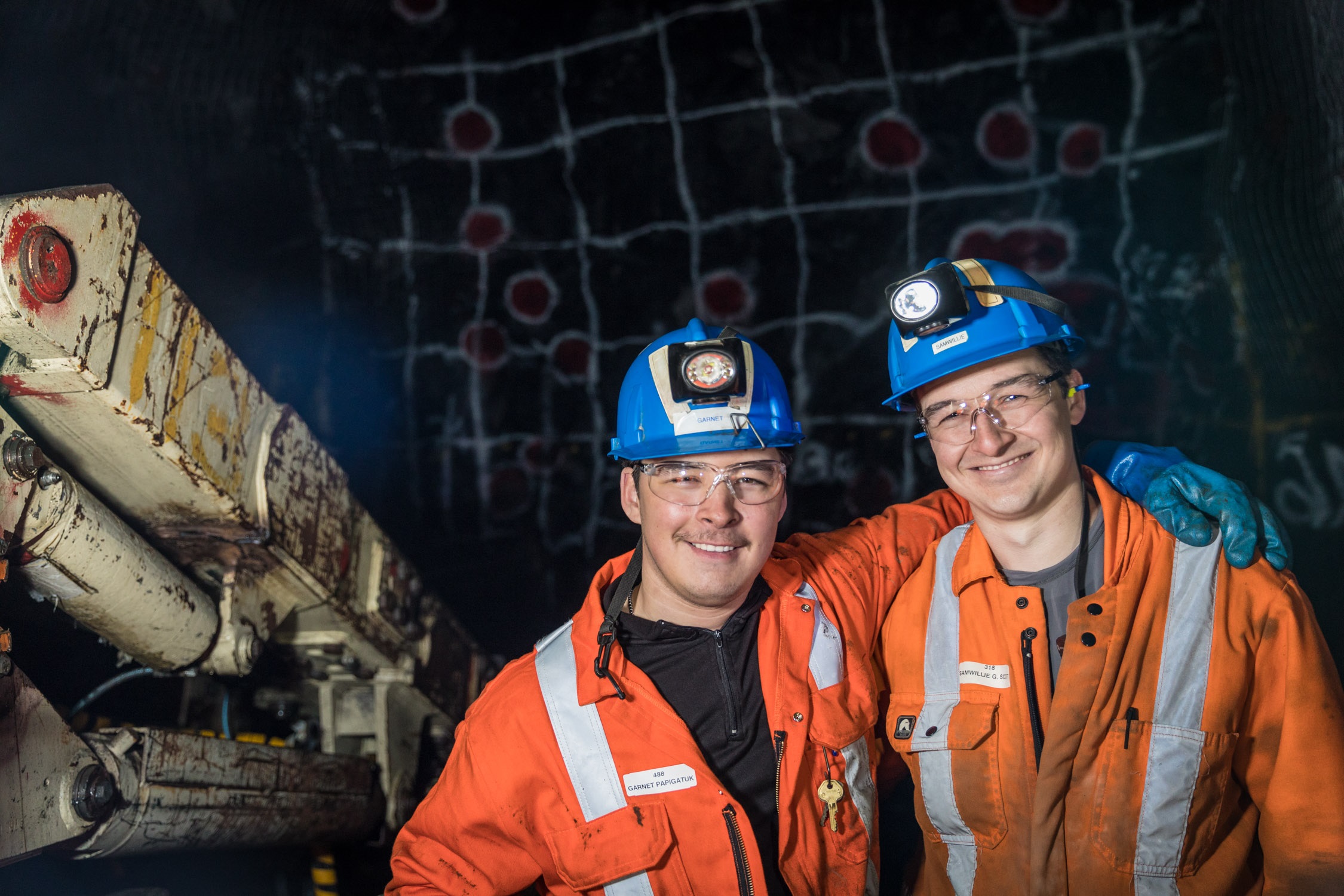 Raglan employees Garnet Papigatuk-Mucker, left, and Samwillie Grey-Scott, pictured together at the mine site. (Photo courtesy of Glencore Raglan)

A Nunavik miner is the recipient of a national award for outstanding leadership in the industry.

Samwillie Grey-Scott picked up the Canadian Institute of Mining, Metallurgy and Petroleum’s Bedford Canadian Young Mining Leaders Award earlier this week for his work recruiting Inuit miners to Glencore’s Raglan mine in Nunavik.

Grey-Scott, who grew up in Aupaluk, started as an apprentice miner at Raglan in 2010. Today, the 29-year-old coordinates Raglan’s Tamatumani program, where he oversees the recruitment and training of Inuit employees at the mine site.

“It was definitely exciting for me and my family,” Grey-Scott said of the honour. “It’s been a long year, with COVID-19, so this was good news.”

Over his 11 years at Raglan, Grey-Scott has worked as a service miner, a mine trainer and a supervisor trainer.

There are currently 200 Inuit employed at Raglan, including its kitchen and cleaning staff.

While working as a trainer, Grey-Scott said he noticed there were very few Inuit moving into mining positions and management.

So he helped launch the Pigunnaqugut project, designed to help move Inuit into higher-level positions at the mine site.

“We were spending a lot of effort on the stope school but weren’t getting them to the top of the food chain,” Grey-Scott said.

“We wanted to tap into the potential and fast track them to management.”

Grey-Scott has since helped mentor a handful of Inuit who are training to work as long hole drillers and blasters and development miners in Raglan’s underground.

One of his proudest accomplishments was training the mine’s first Inuk jumbo driller, Daniel Roussel from Kuujjuaraapik.

“That was really ultimately the goal, to have some Inuit break that barrier, and now, other Inuit can follow suit,” Grey-Scott said.

The COVID-19 pandemic has made it more difficult to recruit. Inuit employees were put on leave for several months in 2020, and even now, Grey-Scott is unable to do in-person recruitment in Nunavik communities.

He continues to travel to work on a two-week rotation, flying in from southern Ontario, where he lives with his wife and four daughters.

But Grey-Scott is keen on helping more Nunavimmiut find long-term careers at Raglan and moving them into positions where they can help shape policy at the mine site.

“That’s really important to me, as an Inuk, to have influence and have a say in the politics here,” he said.

“I’d love to see one day see my manager be an Inuk. It would be great to be dealing with Inuit on that end. Hopefully what I’ve done here can help break a barrier to see that happen.”