Kativik Regional Government councillors met in Tasiujaq last week. Some councillors said they’re concerned that new language legislation in Quebec could impede on the region’s use of Inuktitut. (Photo courtesy of KRG) 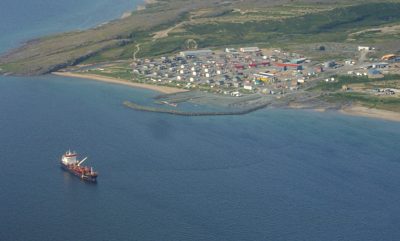 In the late 1990s, Makivik Corp. helped negotiate an agreement with the federal government to build basic marine facilities in each of Nunavik’s 14 communities. (Photo courtesy of Makivik)

The Kativik Regional Government is hopeful that a new round of talks with the provincial government will help the region secure money to upgrade community infrastructure.

“The first item I raised was the need for updated marine infrastructure,” Munick told KRG’s regional councillors, who are meeting in Tasiujaq this week.

“The premier said we would meet again in June. He understands what our demands are.”

In the late 1990s, Makivik Corp. negotiated an agreement with the federal government to build basic marine facilities in each of Nunavik’s 14 communities.

Over the last two decades, the Quebec government has helped to fund upgrades to those ports, to help facilitate sealift operations and improve docking facilities for community fishing boats or search and rescue vessels.

But the province’s funding hasn’t been able to keep up with the communities’ needs, said Ian Darling, director of the KRG’s transportation department.

The Northern Village of Quaqtaq, for example, is working to get approval to do some grading work on the marine ramp at its port facility to make it more user-friendly at low tide.

Quaqtaq is not alone — several of Nunavik’s community docks are unusable at low tide and community leaders have been lobbying for years for more funding to upgrade those facilities.

To even start that work, most communities need first to establish a stockpile of gravel to do the foundational work needed to upgrade community ports, Darling said.

“So hopefully [Premier Legault] is going to open his ears to the fact that we need some money to maintain these facilities.”

In the meantime, regional councillors were buoyed with news of several funded airport improvement projects underway this summer.

At the Kuujjuaq airport, crews are building a new Air Inuit warehouse at the site of the old airport terminal, which has now been demolished. The airport will also see its runway re-paved over the summer months and new LED lights added, the transport department said.

Drilling will be done at the airports in Kangiqsualujjuaq, Puvirnituq and Kangiqsujuaq over the summer to local gravel stockpiles.

In Salluit, the construction of a new terminal building is set to be completed in August, while construction will get underway in Kuujjuaraapik to build a new airport garage.

The KRG’s transport department also asked community leaders for input on how to deal with the recurring problem of wildlife in and around Nunavik’s runways.

Specifically, loose dogs have become a growing issue; the department said it received 110 reports of dogs spotted on runways across the region in 2020.

The KRG noted nine reports of dogs on a runway while an aircraft was moving; one aircraft was forced to overshoot as a result, while another dog was struck by an aircraft, the department said.

Transport officials said they’ve increased runway checks, but the KRG is asking Northern Villages and local dog catchers to take a larger role in keeping dogs out of Nunavik’s airfields.