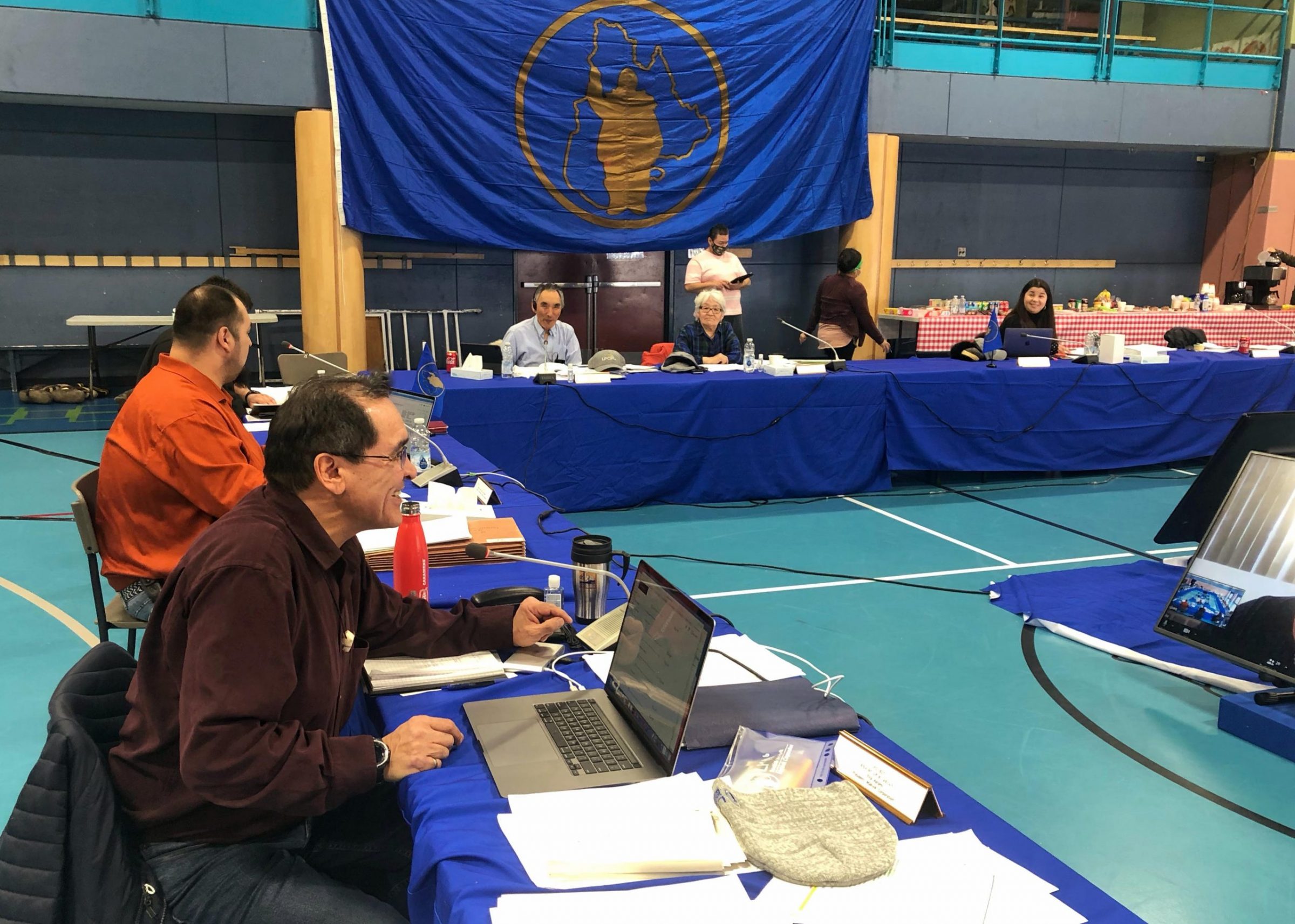 Makivik Corp. president Pita Aatami speaks to Makivik’s board of directors at a Feb. 25 meeting in Kuujjuaq. (Photo by Isabelle Dubois)

Aatami was elected president of Nunavik’s Inuit birthright organization last month, returning to a position he held nine years ago.

He contends that in recent years, Makivik’s leadership has not been in regular contact with the provincial government.

Among Aatami’s first meetings was a conversation with Quebec’s minister of Indigenous affairs, Ian Lafrenière, and he plans to have many more.

“There was really no more discussion with the Government of Quebec,” Aatami said. “I decided once I came back in, I need to get back to communicating with Quebec.”

Quebec plays a major role administering services in Nunavik, including health care, education, and the operation of the region’s airports and municipal services.

“We agreed to set up a Quebec table, where we can discuss self-determination and other files,” Aatami said.

Makivik has invited a Kativik Regional Government representative to sit at that table when it talks with provincial officials, though the organization has yet to make any specific requests or create an agenda just yet.

Under Makivik’s last president, Charlie Watt, the organization signed a memorandum of understanding with the federal government to negotiate Inuit self-government for Nunavik.

Aatami hopes the Quebec government will now take part in this process too.

“It’s a very complicated file, being under the James Bay and Northern Quebec Agreement,” he said. “But yes, we are going to be working on it. “

Nunavik Inuit are just one of 26 Indigenous groups across the country that have entered into self-government negotiations with the federal government in recent years.

Aatami says he has learned from the last time the region tried to negotiate a new form of government. That led to the Nunavik Regional Government proposal, which was ultimately rejected in a 2011 referendum.

“We don’t want to re-invent the wheel,” he said. “We know what we want, and it has to include guarantees to protect Inuktitut and our culture.”

Aatami said his first month back in the role of president has been “a whirlwind of meetings.”

True to his campaign pledge, he met with representatives of Nunavik’s Qarjuit Youth Council to discuss giving the organization a louder voice at Makivik’s table.

Aatami said he wants to create a new executive role at Makivik that would be held by an Inuit youth, focused on youth-related issues in the region.

At a Makivik board of directors meeting in Kuujjuaq at the end of February, directors agreed to further discuss the creation of that role, he said.

Aatami said he also hopes to pursue a new funding agreement for Avataq Cultural Institute, which hopes to move most of its Montreal-based operations back to Nunavik.

And Aatami’s previous role as president and CEO of Air Inuit will inform his latest presidency; as president, he’s keen to pursue major airstrip renovations at Nunavik’s airports to lengthen runways, to accommodate new and larger aircraft.

Air Inuit has yet to hire a new president and CEO.