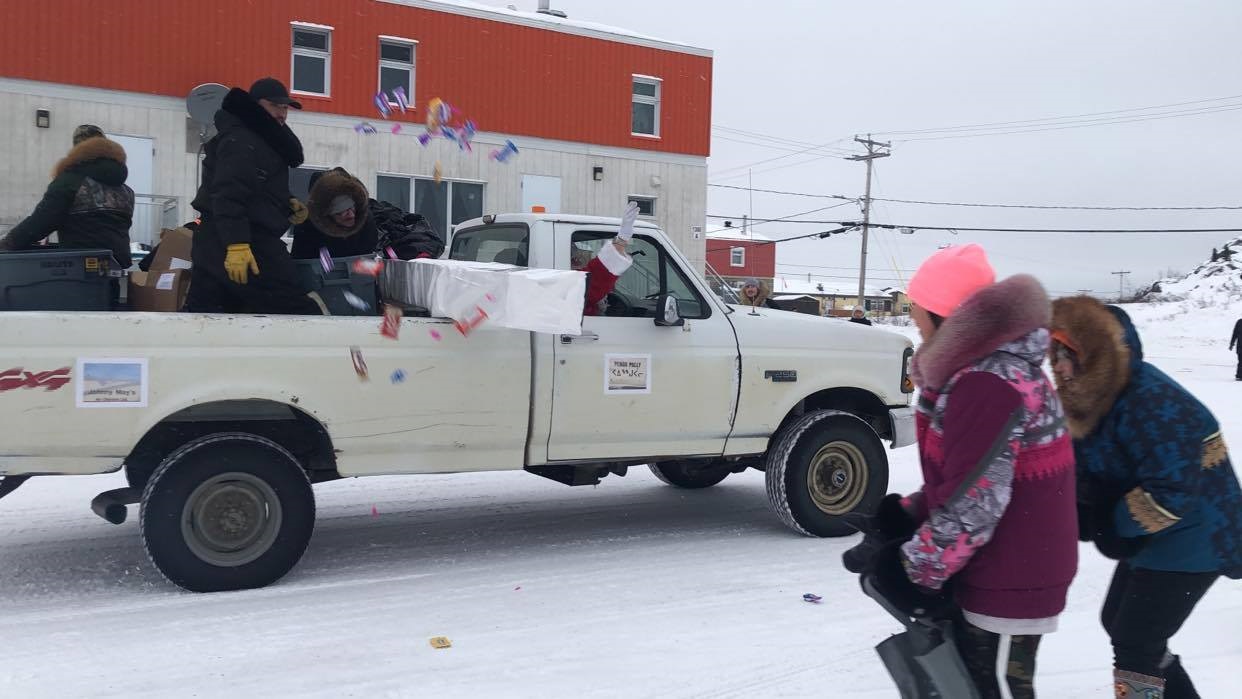 Kuujjuaq pilot Johnny May traded in his De Havilland Beaver for a pick-up truck this year to continue his 55-year-old candy drop tradition in the Nunavik community. (Photo and video by Isabelle Dubois)

Kuujjuaq’s annual Christmas candy drop might have been grounded this year, but it was far from cancelled.

2020 marks the 55th anniversary of one of Nunavik’s best-known holiday traditions, when famed bush pilot Johnny May takes to the Christmas skies in Pengo Pally, his De Havilland Beaver, dropping candy and other treats over the Nunavik community.

Typically, hundreds of Kuujjuamiut convene in a field on the outskirts of the community on Dec. 25, but this year, COVID-19 restrictions on large outdoor gatherings would have made that tricky.

So Bruce Turner, May’s long-time candy drop helper and so-called Christmas elf, suggested an idea: why not do the candy drop on wheels this year?

“He had a dream that we used my old ’93 pick-up and threw candies out the windows,” said May. “And I thought, that’s a really good idea. So [Turner] built a pair of wings and wrote Pengo Pally on the side and off we went.”

Kuujjuaq’s Pinguatitsijingiit Recreation Committee liked the idea too, and it supplied all the goodies and cash prizes to hand out. Three other pick-up truck drivers volunteered to follow the lead truck to distribute all the treats to people in front of their homes.

May said they didn’t give Kuujjuaq residents much notice, but it didn’t matter.

“We were honking our horns all along to let people know we were coming,” he said. “Every street had people on it.”

“And we got to see all these people up close,” said May, who’s usually too far away to catch the expressions of participants below. “I think I enjoyed it more than the other drops.”

Nunavik’s candy drop, considered unique in Canada, dates back to the mid-1960s, when the Hudson Bay Co. started hosting Christmas games for local families in the communities.

Hudson Bay Co. managers would often throw candy from the stores’ rooftops, a tradition May took to the skies as a 20-year-old pilot.

Now 75, May is never certain how many more candy drops he has left to give. Every year, the veteran pilot has to apply for a special permit through Transport Canada which allows him to fly at under 1,000 feet and release goods from his aircraft.

“I’d really like to do one more next year,” he said. “Hopefully COVID-19 will be over by then. But I think we’ve created a new tradition here.”