“At this particular point, the forecast is anybody’s guess” 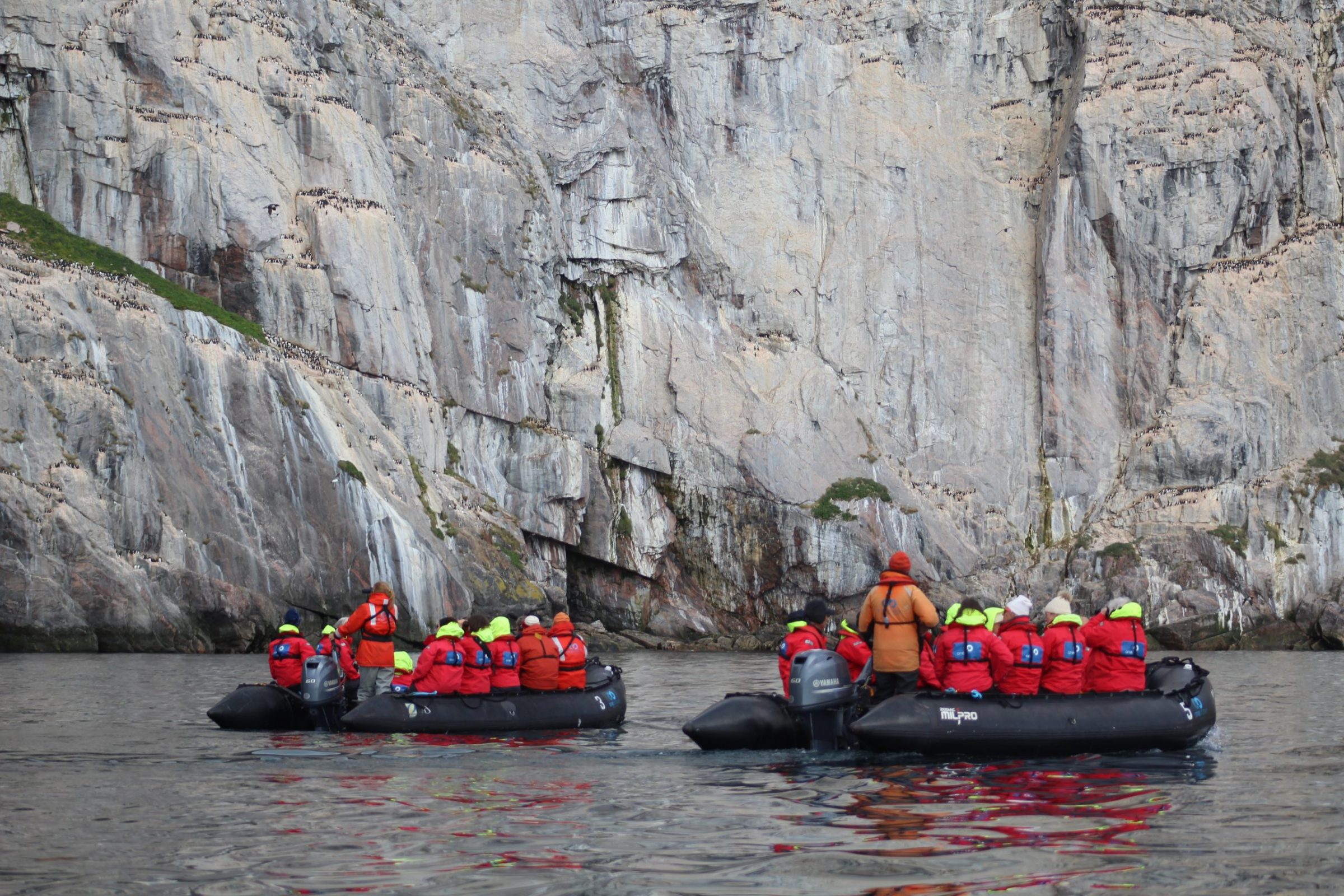 According to data provided by Travel Nunavut, nearly a quarter of the territory’s tourism-related businesses experienced a decrease of more than 50 per cent in sales revenue between January and March. Here, participants on a One Ocean expedition take a zodiac cruise to look for resting birds around Akpatok Island and the Lower Savage Islands off Quebec’s northern coastline in August 2019. (Photo by Emma Tranter)

With the borders of Nunavut and Nunavik being effectively closed by the COVID-19 pandemic, the eastern Arctic’s tourism industries have been hit hard.

According to Travel Nunavut, tourism employs around 3,000 people and contributes over $300 million to the territory’s economy.

Between January and March, nearly a quarter of Nunavut’s tourism-related businesses saw their revenues drop by more than 50 per cent.

“The travel industry is one of the first industries that has been hit by COVID-19,” said Kevin Kelly, CEO of Travel Nunavut.

“Our expectation is, we’re not going to see anything relaxed in the next several weeks or potentially months.”

While the same kind of data isn’t available for Nunavik, the impact is similar.

“The winter season is mostly March and April for us, so I know for a fact that some of the packages that were supposed to happen in April in the parks were cancelled.”

In Nunavut, 75 per cent of tourism-related business owners believe there’s a chance of them closing temporarily between April and June, according to statistics provided by Travel Nunavut.

Thirteen per cent of tourism-related businesses say there’s a chance they will close permanently.

“At this particular point, the forecast is anybody’s guess,” said Kelly.

“All we are trying to do is assist the tourism operators in any way we possibly can by ensuring they have the most up-to-date information about the programs and services that are available to them.”

But Kelly is optimistic. Much of Nunavut’s tourism comes from business travellers, who stay in hotels, buy art and go out on tours with outfitters.

Ensuring that tourism operators are ready for those guests is another thing Travel Nunavut is helping with, from proper marketing materials to up-to-date websites.

“Working with people that way is how we’re going to see some recoveries,” said Kelly.

“There’s calculated risks … to move things forward, but our belief is that business travel will start up and that should help give some opportunities.”

Another big hit to Nunavut’s tourism industry is the cancellation of the Arctic cruise ship season, which will affect artists and other tourism-related businesses, such as those that provide tours around communities and are hired by either the hamlets or the cruise ship companies.

“There’s been tons of movement on starting up new operators around the cruise ship season,” said Kelly.

“Unfortunately, some of those folks aren’t going to see that their businesses grow.”

According to Kelly, Travel Nunavut is working with those businesses to help make them less reliant on cruise ships and more open to other tourism opportunities, such as business travellers.

But not all tourists to the territory are coming for business or on cruise ships, said Kelly. Some do come for leisure tourism.

“Most of the time when people are booking a trip and coming to the Arctic, those trips are being booked the better part of a year in advance,” said Kelly.

“The unfortunate part is, the folks from the summer and the spring are going to be dramatically affected.”

The same is true for Nunavik, whose summer tourism season is from July to August.

“Right now, there’s a lot of questions as to, is the fishing season going to happen? Are we going to be able to welcome guests for our adventure tours? We’re not sure yet,” said Dubois, who, despite this, is also hopeful that, if travel restrictions were lifted by then, tourists from other regions in Quebec or Ontario might make the trip north.

While the short-term situation may be out of the control of Kelly, Dubois and tourism operators, the long-term goals of the tourism industry are intact.

“Now’s the time for these operators to really get into the planning phases of how they’re going to set that business up to succeed after COVID-19 is done,” said Kelly, who had one message for would-be travellers to the territory: “We’ll be here when the restrictions are lifted.”