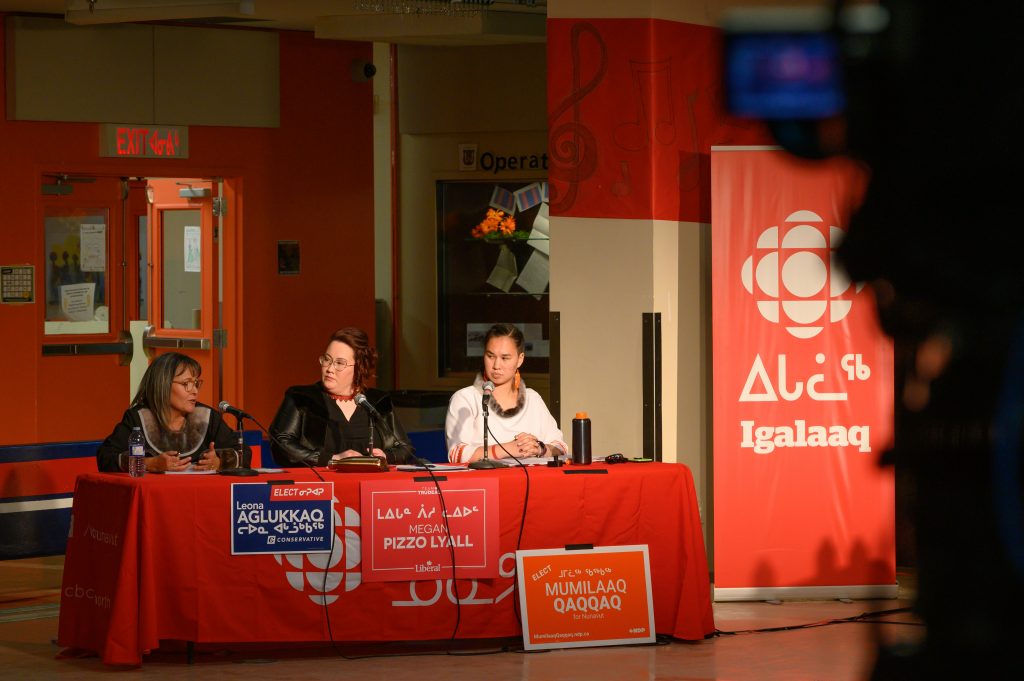 The Nunavut federal candidates debate, hosted by CBC North in Iqaluit, offered a chance for the three main parties’ candidates to make their case to voters on Thursday, Oct. 17.

The veteran Conservative candidate, Leona Aglukkaq, said her experience in politics—municipal, territorial and federal—gives her a proven ability to navigate federal bureaucracy.

“I was driven to run again out of frustration over decisions made that impact the North with no consultation,” she said.

The last little while, there have been a lot of announcements in Nunavut, including the re-announcement of funding for housing, first made in 2017, she said. With a shortfall of 4,900 houses in Nunavut, “I have the experience in Ottawa to move that file forward.”

“In the first two months, the federal government cut $34 million from transfer payments,” Aglukkaq said. That’s in reference to the changes to the territorial financing formula in 2016, which saw a decrease in funding for all three territories.

However, Ottawa later largely backtracked on the change, leaving a smaller shortfall that year of about $8 million.

And, finally, “I know people are sick of me talking about the carbon tax but I’m hearing it’s making things more expensive for Nunavummiut,” Aglukkaq said. With so much discussion around Nutrition North and lowering the cost of food, increasing the cost of shipping is a major concern.

On mental health, Aglukkaq said appropriate services for Inuit, in Inuktitut, are a must.

For the NDP, Mumilaaq Qaqqaq clearly positioned herself as the voice of change.

“A Liberal or Conservative has held this seat since before I was born, and we’re still talking about the same issues,” she started off. “Mental health, housing—we are fighting for basic human rights when we should be striving and thriving like everyone else in Canada.”

Qaqqaq spoke about the suicide crisis in Nunavut in the House of Commons in 2017, she said. And she would say the same thing today. “Basic human rights are the first steps to be able to tackle this crisis,” meaning food security, housing and health care.

“We need change, we need to stop losing our people,” she said.

“The NDP platform for Indigenous people is 10 pages long. The Liberal’s is about six paragraphs. The Conservatives even less and you have to dig around for it,” Qaqqaq said.

“We need to do better for the first people of our country and the NDP will.”

Representing the Liberals, Megan Pizzo-Lyall has a plan, her own and her party’s, that relies on both experience and vision for Nunavut.

“I want to clear the air on the carbon tax,” Pizzo-Lyall said. More of a levy, the goal of this plan is to change the minds and actions of people.

The Liberal Party’s carbon tax does increase some costs, but flights in the territory and flying into the territory are exempt. In provinces where it was implemented, the collected tax is evenly redistributed to citizens under the plan.

In Nunavut, the Government of Nunavut is subsidizing half of the additional tax, but collecting the money returned by the federal government to put back into Nunavut’s economy.

On climate change, Pizzo-Lyall said the Liberals are investing, so hunters can hunt safely and so children have clean air and water. “We have made so much progress in the last four years, we cannot go back,” she said.

Green Party candidate Douglas Roy lives in Kimmirut and was unable to attended, but submitted a recorded response that urged residents not to vote with their wallets—”though we’d all like another $50 in our pocket”—but with a mind for the environment.