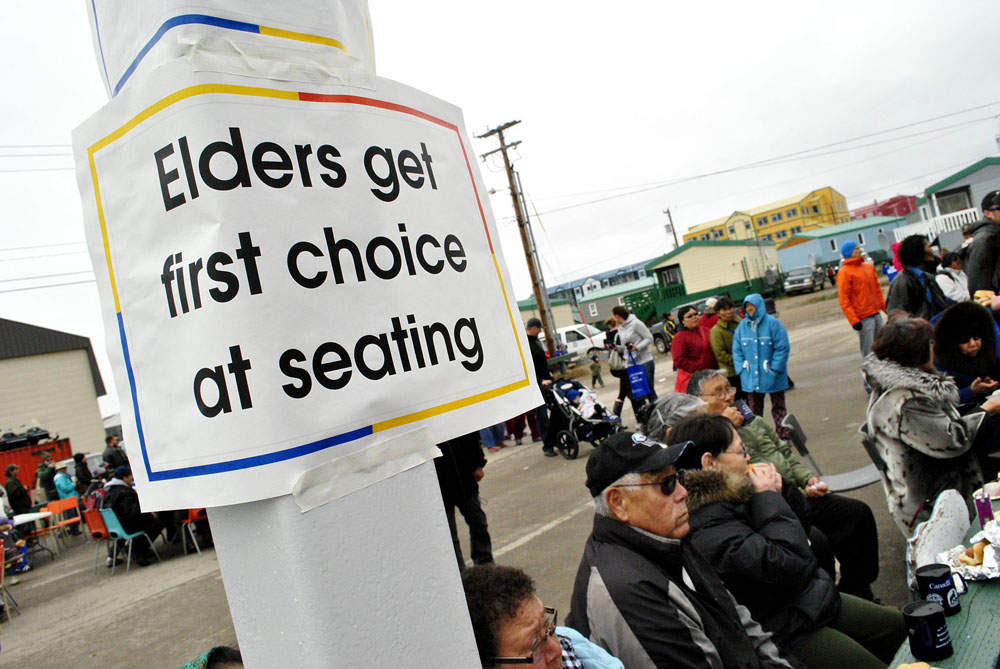 During Nunavut Day festivities on July 9, 2011, behind the legislative building in Iqaluit, a sign makes it clear who gets priority seating. (File photo)

After procuring a team of expert consultants last month, the Government of Nunavut is still many months away from being able to push the start button on the construction of long-awaited extended-care centres for elders in all three regions of Nunavut.

That’s because GN officials are still working on a detailed business case that would describe the size of the planned facilities, their architectural features, proposed construction schedules, and how many dollars the GN will ask the Nunavut legislative assembly to approve.

“As is typical in all GN major capital projects, a comprehensive business case is required before a project is presented to the legislative assembly for consideration of funding for design and construction,” a spokesperson for the Department of Community and Government Services told Nunatsiaq News last week in response to emailed questions.

Right now, the GN is looking at two 24-bed extended-care centres in each of the Kitikmeot and Kivalliq regions, and a total of 108 beds in the Qikiqtani region located within either one or two facilities.

Experts contracted to do planning work

To help them plan for those centres and create a business case, the GN last month contracted a team of consultants—mostly architectural and engineering experts—from a Winnipeg firm called FT3 Architecture Landscape Interior Design.

CGS, the GN department responsible for contracting and procurement, awarded the contract to FT3 this past July 24, following the issuance last May of a request for proposals.

The CGS spokesperson cautioned that the FT3 contract is not for actual design or construction of the facilities.

And it could take at least six months for the GN to put together a design and construction funding proposal for MLAs to vote on.

MLAs may vote next fall or winter

If the business case is done in the next four weeks, it’s possible that the GN could go to the assembly this fall to ask MLAs to vote to spend the required money. If not, then they may wait until next winter.

“If the business case is completed within the next four weeks or so then it is possible the capital request for funding will be included in the upcoming fall session. Otherwise it is reasonable to assume the capital project funding request would be presented in the following session (Feb/Mar 2020),” the spokesperson said.

The creation of in-territory extended-care centres is a major political priority for the current government.

Right now, all 44 existing long-term care beds in Nunavut are filled and at any given time about 20 seniors are on wait lists, the GN said in an RFP.

In each of three communities, Arviat, Baker Lake and Iqaluit, there are “elders home” facilities offering lower forms of care, Level 2 and Level 3.

Gjoa Haven and Igloolik each have continuing-care centres capable of offering what’s known as Level 4 care, the second-highest level of care, offered daily by nurses.

And in 2017, an eight-bed care centre opened in Cambridge Bay.

But the need for long-term care is growing rapidly. The GN estimates that by 2035, the territory will need 156 beds for elders who need long-term care.

At the same time, growing numbers of Nunavut seniors require advanced forms of round-the-clock care for various forms of dementia and other chronic conditions.

If the Government of Nunavut and its contractors stick to their current schedule, Nunavut elders who need long-term care will be moved into the three new planned long-term-care facilities between 2022 and 2024, a recent tender document said.

The request for proposals states that FT3 Architecture will do construction cost estimates for the GN, as part of their design work, and act as a “cost advisor” until the projects are complete.

If built as a single facility, the 108-bed Qikiqtani structure, which would likely be located in Iqaluit, would be 10,975 square metres in size, while each of the 24-bed facilities in the other two regions would be 4,319 square metres.

Under the proposed schedule, construction on the Kitikmeot elders centre, following a request for proposals in December this year and a contract to be awarded in February 2020, won’t likely start until after the arrival of supplies by sealift in the fall of 2020, a GN project schedule states.

And work on the 24 beds in the Kivalliq and the 108 beds in the Qikiqtani region, following a request for proposals in October 2020 and a contract to be awarded in February 2021, would start between July and October 2021, following the arrival of the sealift that year.

That means the Kitikmeot facility could be finished in time for clients to start moving in between the winters of 2022 and 2023.

As for the Kivalliq and Qikiqtani facilities, clients could start moving in between winter 2023 and spring 2024, the project schedule states.

But those estimates depend on how quickly early planning work can get done.

“We will see in the next month if we get to a final complete business plan. If we do there is the possibility we will present it in the upcoming fall session, otherwise expect it will be ready for presentation to assembly in winter session. Will have more firm idea by mid-September,” another CGS spokesperson wrote.

It’s also likely the facilities will be created through public-private partnerships. Health Minister George Hickes made that clear last February, when he said in the assembly that the GN has asked Partnerships B.C. to advise them on how to do that.