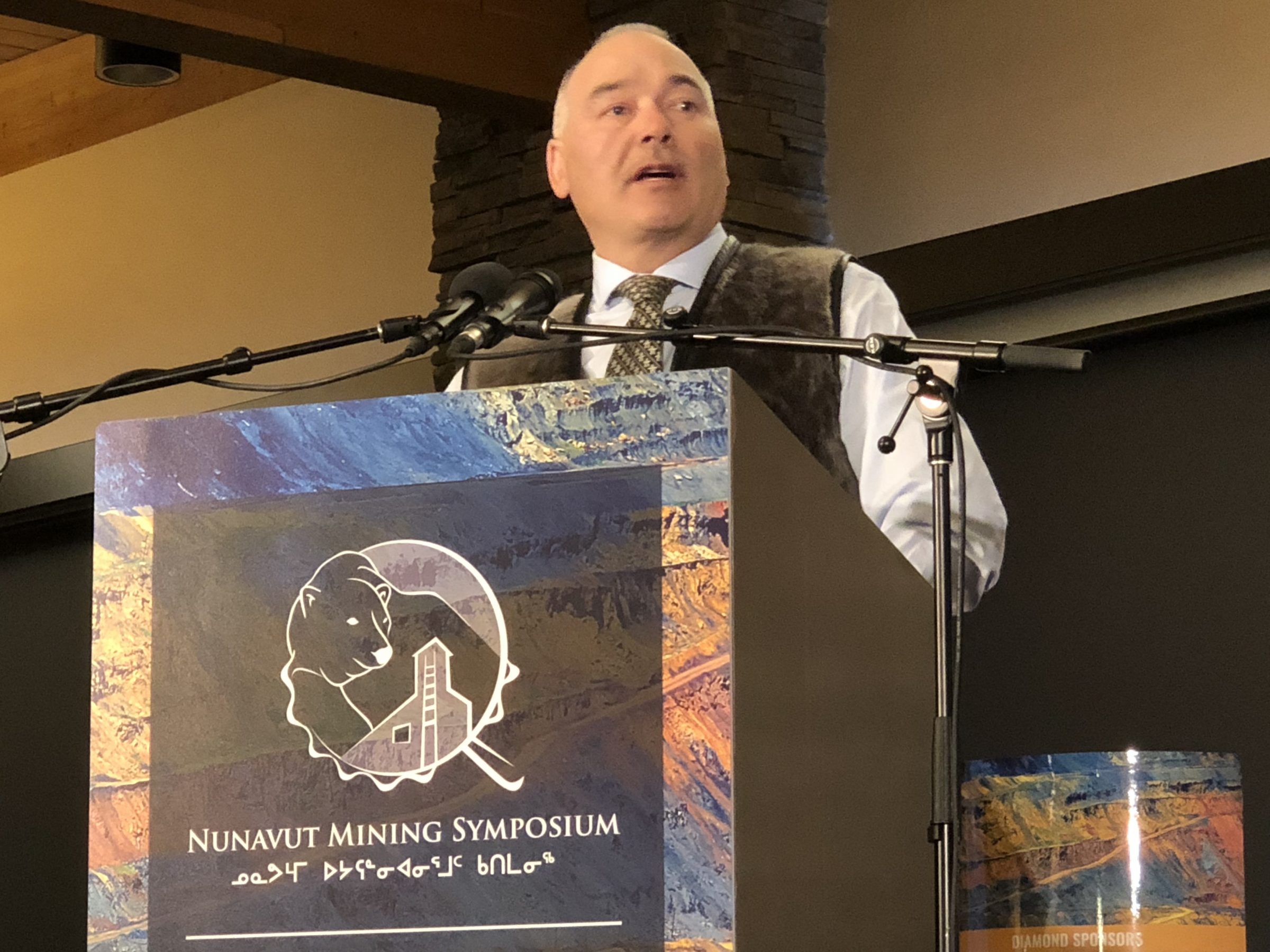 Nunavut Premier Joe Savikataaq speaks at the 2019 Nunavut Mining Symposium in Iqaluit. The 2020 edition of the event was cancelled on Wednesday, March 11, due to concerns about the new coronavirus, COVID-19. (Photo by Jane George)

The 2020 Nunavut Mining Symposium has been cancelled due to the new coronavirus, COVID-19, which was today declared a global pandemic.

The Nunavut Mining Symposium Society said this afternoon that it had determined, after meeting with Nunavut’s chief public health officer, that “it would be the most responsible precautionary measure to address concerns around the spread of COVID-19.”

“We recognize that our event attracts a significant number of people from around Nunavut and Canada,” Bernie MacIsaac, the society’s vice-president, said in a news release. “Current best practices to help contain the illness include reducing large public gatherings, so this is what helped guide the decision.”

The Nunavut Mining Symposium was to be held from March 30 to April 2.

The conference generally draws up to 500 delegates to Iqaluit and also involves a trade fair that’s open to the public.

The symposium’s cancellation follows shortly after news that one attendee at the recent Prospectors and Developers Association Conference in Toronto has since tested positive for COVID-19.

That attendee is from Sudbury, Ont. PDAC is attended by about 26,000 people from 132 countries.

Anyone who attended PDAC has been asked to monitor themselves for symptoms of the coronavirus for 14 days.

Nunavut’s chief public health officer, Mike Patterson, said today in a statement that said there are no confirmed cases of COVID-19 in the territory.

But Nunavut’s Health Department said late on Wednesday, March 11, that there was a contingent of seven employees from the territory’s Economic Development and Transportation Department at the conference.

“While the risk is minimal and none of these employees have reported any of the symptoms of COVID-19, they are staying home as a precaution,” the statement said.

As for those who had planned to attend the Nunavut Mining Symposium, organizers said it would be issuing full refunds to all delegates and sponsors who have paid to date.

The hotels and airlines that are also affected by this decision have been notified.

Iqaluit’s Frobisher Inn, Discovery Hotel and Capital Suites will allow cancellations of delegate rooms without penalty, despite it being outside normal cancellation time.

Canadian North says it will waive all change fees related to Nunavut Mining Symposium bookings, or allow these bookings to be exchanged for a travel credit that will be valid for one year from the date of issuance.