“It is time for Nunavut to meet national standards” 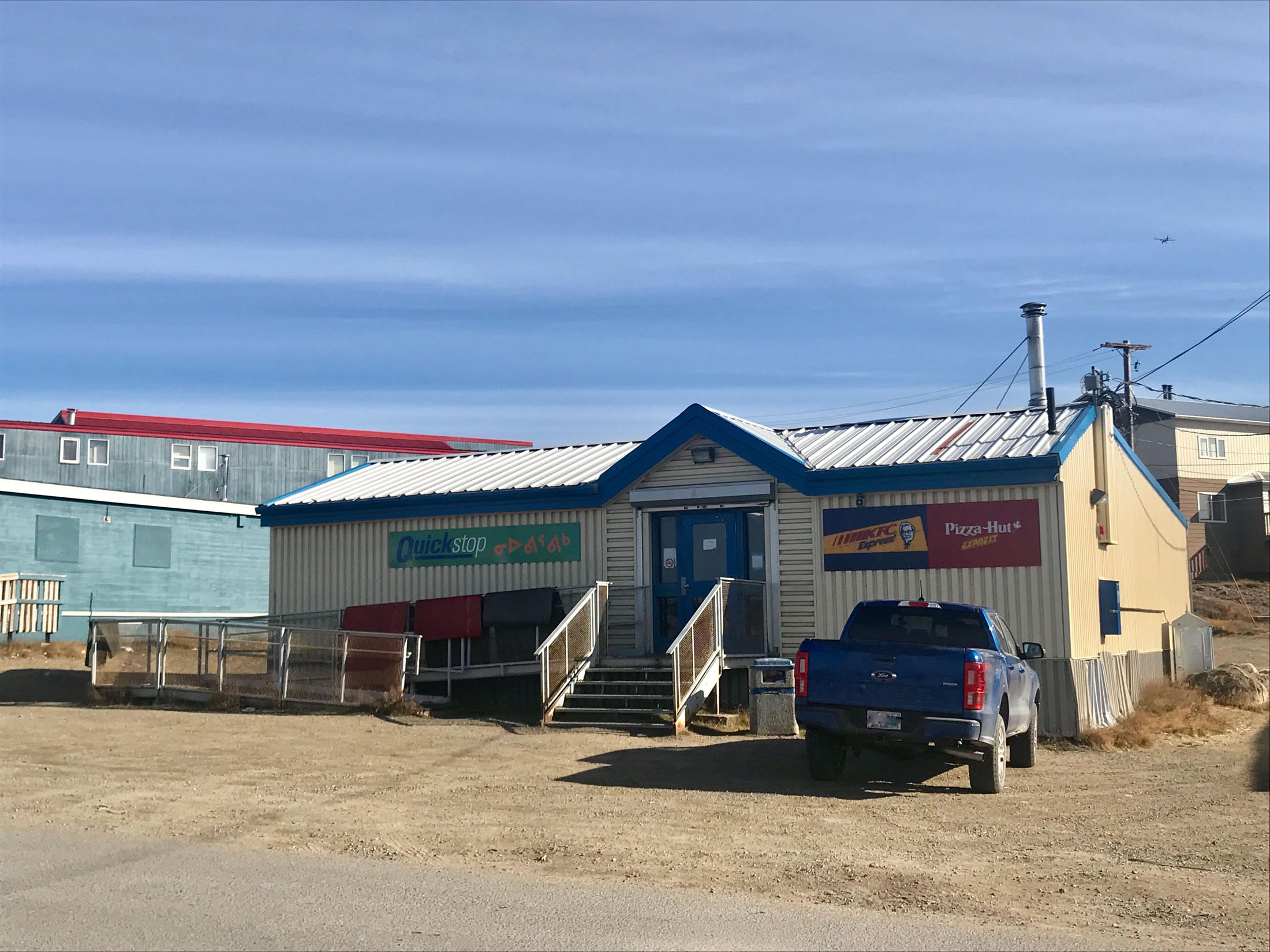 Three of the four Quickstop locations in Iqaluit faced health inspection violations in 2017 and 2018. But those reports are not yet available to the public in Nunavut. (Photo by Emma Tranter) 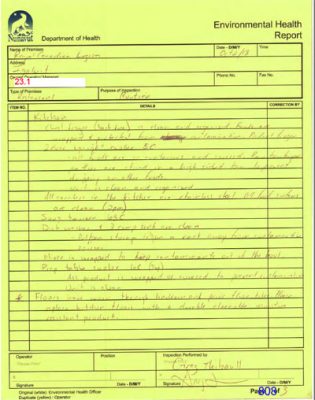 Pictured above is part of a handwritten report of a health inspection at the Royal Canadian Legion in Iqaluit from October 2018.

The Government of Nunavut’s Department of Health is moving to an electronic system for filing food establishment inspection reports—one step towards making the reports accessible to the public.

Health inspections are conducted at approximately 1,000 facilities across the territory each year, typically twice annually. Any facilities that prepare or sell food to the public are subject to those inspections, from restaurants to mine sites, to hospital cafeterias and school breakfast programs.

But Nunavut remains the only jurisdiction in Canada that does not make its health inspection reports public.

Adding to the challenge, the territory’s health inspectors have long prepared handwritten reports that have not followed any standardized ranking system, making it difficult to discern how critical health violations are or how to remedy them.

The program provides standardized compliance items for inspectors to check off and fill in notes, entered directly on a tablet. It also eliminates the challenge of deciphering handwriting.

“It allows us to capture data which is something we haven’t been able to do before,” said Michele Leblanc-Harvard, an environmental health specialist at the GN’s Department of Health.

“Overall I think the tool will help us improve our program.” 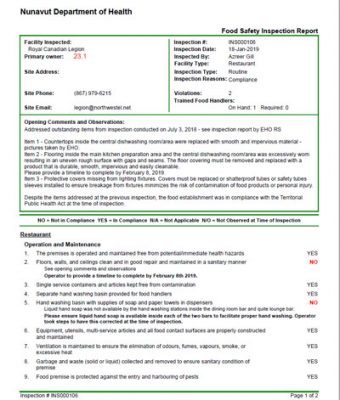 And here is a January 2019 report of a follow-up health inspection at the Legion, this time done with the GN’s new software, Hedgehog.

“We’ve sort of dealt with a facility individually”

The issue of closed access to food inspection reports was, in part, brought to light in a 2016 investigation by CBC, which through an access to information request found about a third of Nunavut’s food establishments faced at least one health violation between 2014 and 2015.

Nunatsiaq News found that percentage remains roughly the same in 2019, following a more recent access to information request for all of Nunavut’s food inspections from 2017 and 2018.

The hundreds of reports Nunatsiaq News reviewed do not illustrate any non-compliance issues as serious as those facing the now-closed Baffin Deli, which included violations like cooks caught licking their fingers and coughing over food.

Take a July 2018 health inspection of a Quickstop store in Iqaluit, which revealed a number of infractions: broken floor tiles, protective covers missing from lighting fixtures and food products kept on the floor of the storeroom.

“The conditions, many of which have been cited repeatedly in previous inspection reports over the last year, contravene the regulations and pose a potential public health risk and should be rectified as soon as possible,” read a letter from a GN health inspector to the store management, dated July 11, 2018.

The issues flagged in the inspector’s report may not have been considered critical, but customers would have had no way of knowing that the Iqaluit store—and other Quickstop locations in the city—have repeatedly violated regulations under Nunavut’s Public Health Act.

Even then, Leblanc-Harvard explained that facilities that violate Nunavut’s health regulations are not penalized.

“Right now, we’ve sort of dealt with a facility individually, going over compliant and non-compliant items,” she said.

“Then we move on to fix the high-risk, non-compliant items as quickly as we can.”

Logistics in the North mean that there are often delays to fixing problems, typically due to waiting for resources to be shipped in to the community.

Recent inspections at the Royal Canadian Legion’s kitchen in 2017 and 2018 provide a good example of that.

A 2017 inspection flagged issues with the facility’s food storage and broken flooring. By the time inspectors returned in the summer of 2018 to inspect the Legion again, the floor had yet to be repaired; while a renovation had been planned, the materials had only just arrived by sealift and management was waiting for a contractor to arrive to start the work.

Follow-up inspections or reviews are scheduled depending on the urgency of resolving the non-compliant item and the ability of inspectors—who are based in Iqaluit, Baker Lake, Rankin Inlet, Pangnirtung and Cambridge Bay—to reach a community.

“We have to be a little more inventive with our approach, because we can’t fly into every community every two weeks to follow up,” Leblanc-Harvard said.

Lingering issues with non-compliance would eventually go to Nunavut’s chief medical officer of health, she said, though she noted that it’s extremely rare to see a facility closed for violations.

Inspectors could, however, recommend the municipality revoke a business licence.

The Navigator Inn and Restaurant faced a number of infractions related to poor sanitation in both 2017 and 2018, when it applied to operate as a fast-food counter under a temporary permit.

The facility finally closed for good last year, but Leblanc-Harvard could not confirm whether that closure was due to repeated health inspection violations.

“We’ve gone in to recommend an operator shut down for a period of time to deal with non-compliant items,” she said.

“But typically, we haven’t had any problems. Most people work pretty diligently to get an item fixed.”

“It is time for Nunavut to meet national standards”

Since the first reports of food facility violations hit Nunavut headlines in 2016, there has been a steady call for changes to the territory’s health inspection system, with a focus on making reports public.

In more recent years, Iqaluit-Manirajak MLA Adam Lightstone has asked the Department of Health to commit to updating its Public Health Act, as well as creating an online, searchable database of inspection reports.

“It is time for Nunavut to meet national standards and to ensure the safety and confidence of consumers,” Lightstone said.

“I also believe that all establishments should publicly display the results of their most recent inspections, as is common practice in many other jurisdictions.”

That’s the goal, said the GN’s Department of Health, though it’s not quite there.

Nunavut’s new Public Health Act was indeed passed in 2016, but it requires new regulations to be in place before it can be enforced. Some of the regulations would allow food inspection reports to be made public.

“Development of the regulations is ongoing,” the department said in an Aug. 15 email to Nunatsiaq News. “Once they are complete, a cabinet submission will take place before the act is enforced.”

“It’s a work in progress,” he said during a February 2019 review of the department’s budget.

“[It’s] making sure that the inspections are done and reported in a consistent fashion…. The software is going to help.”

Once Nunavut begins posting the results of its health inspections, Lightstone hopes both the public and private sector will pitch in by consolidating report results through online applications.

An app called Tomati, for example, provides public data on health inspection reports and assigns restaurants a score, all searchable through your smartphone.

The document embedded below is an example of the GN’s new, standardized health inspection reports.