Sending more than 300 athletes, team members to event that opens Jan. 29 in Alberta 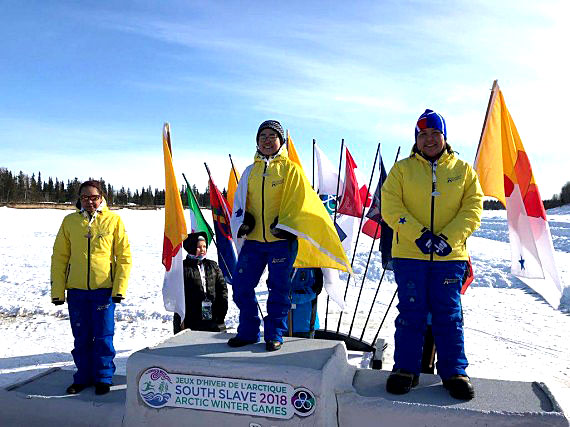 More than 300 athletes and participants from Nunavut and Nunavik will be heading to the Arctic Winter Games in Wood Buffalo, Alta., later this month. Pictured here are athletes from the 2018 Arctic Winter Games standing atop the podium. (File photo courtesy of Team Nunavut)

More than 300 athletes, coaches and team members from Nunavut and Nunavik are heading to the 2023 Arctic Winter Games later this month.

The Games are set to take place in Wood Buffalo, Alta., from Jan. 29 to Feb. 4, showcasing a range of sports competitions for northern and Arctic athletes and promoting athletic competition, cultural exhibition and social interaction among northerners.

Team Nunavik announced the 55 members of its team on its official Facebook page.

A region’s team is made up of athletes, coaches and youth ambassadors who will work as volunteers for the host society during the games, as well as cultural performers, managers and additional staff.

Representing the cultural contingent on the team is the Inuksuk Drum Dancers from Iqaluit. The group will perform traditional Inuit music, including throat singing and drum dancing, and contemporary Inuit songs from across Nunavut as part of the weeklong schedule of events.

Team Nunavik will compete in Arctic sports, Dene games, table tennis, badminton, snowshoes, and will participate in the cultural contingent.

The inaugural Arctic Winter Games were launched in 1970 in Yellowknife. Since then, the Games have been held every two years in different circumpolar regions of the world.

This year’s Arctic Winter Games will be the first to be held since 2018. The COVID-19 pandemic forced the cancellation of the planned 2020 Games in Whitehorse.