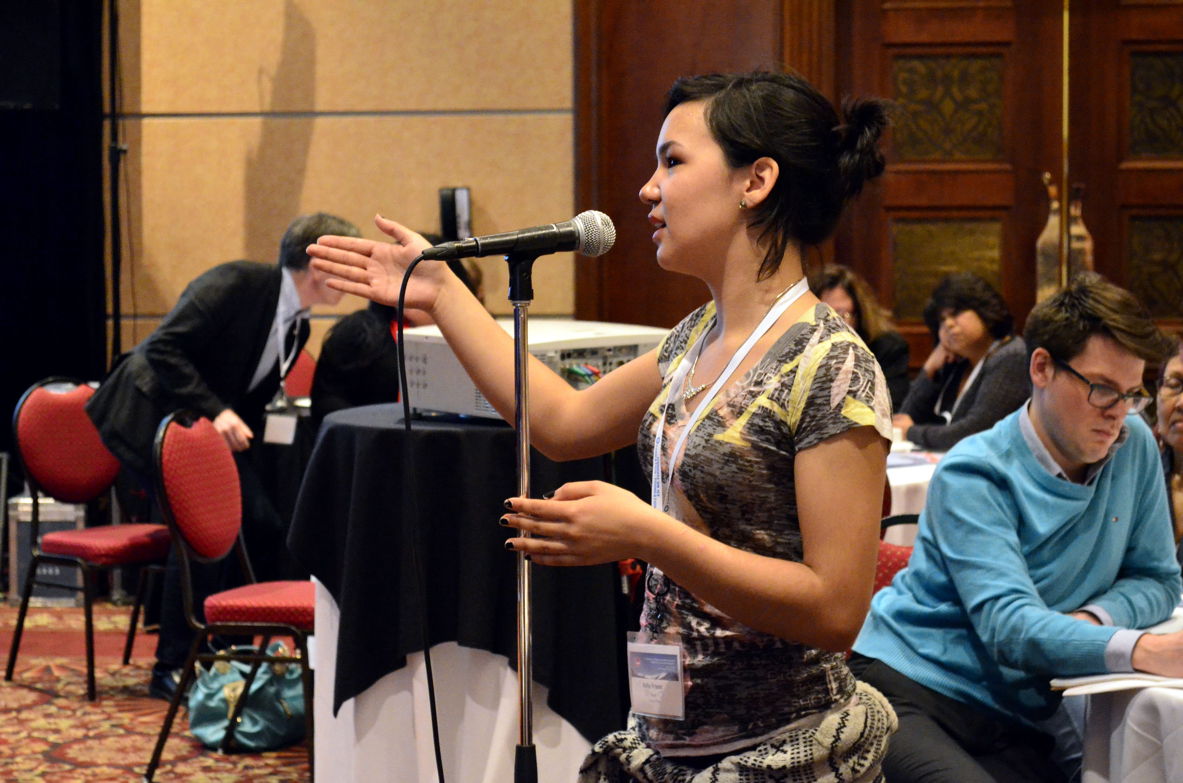 Kelly Fraser on April 28, 2015, speaking in support of the creation of a Nunavut university, at an event in Ottawa held to mark the 30th anniversary of Nunavut Sivuniksavut. Fraser, 26, died in Winnipeg on Christmas Eve. (File photo)

Note: This story may bring distress to many readers. If you need support, please call one of these numbers:

A vibrant Nunavut voice fell silent this month when Kelly Amaujaq Fraser, 26, a rising singer, songwriter and recording artist from Sanikiluaq, died by suicide in Winnipeg on Christmas Eve.

Her family released a statement on Dec. 30 that confirms Fraser died by suicide.

“Kelly suffered from PTSD for many years as a result of childhood traumas, racism and cyber bullying. She was actively seeking help and spoke openly about her personal challenges online and through her journey,” said the statement, issued on behalf of her mother, Theresa Angoo, and her siblings, Mellow, Maxine, Jessie, Rachel, Christopher and Oliver.

“She was fiercely open with her fans in the hopes that sharing her struggles might help them know they were not alone. Kelly fought so hard to be well.”

The statement acknowledges that Fraser has left behind many family members across the North, including her “special family,” Avia Pipaluk and Patricia Bell of Ottawa.

And they said they request privacy and will release no other details on the circumstances of Fraser’s death. They said memorials for her will be held later in Winnipeg and Iqaluit, with details to follow later.

In its 2016 National Inuit Suicide Prevention Strategy, Inuit Tapiriit Kanatami caution there is no single cause for any individual death by suicide.

“When someone ends their life by suicide, we know that an accumulation of life circumstances and events has shaped that decision,” ITK said.

After news of her sudden passing spread on social media, Fraser’s fans across the circumpolar world, from Greenland to the North Slope of Alaska, posted multiple tributes to her talent and multiple expressions of grief.

That included staff at the Nunavut Sivuniksavut college program in Ottawa, where Fraser was enrolled in 2011 and 2012.

“The Nunavut Sivuniksavut community is deeply saddened by the death of Kelly Fraser. She was a talented and passionate young woman who touched so many lives with her music,” said a statement that NS posted on its Facebook page on Dec. 28.

“We have many fond memories of her time as a student at NS, where she spent many hours playing her guitar and singing her heart out. Our heartfelt condolences go out to her family.”

Sen. Murray Sinclair, who from 2009 to 2015 served as chair of the Truth and Reconciliation Commissioner, posted his own tribute.

I am saddened to hear of the passing of this beautiful spirit. Kelly Amaujaq Fraser was one of our young heroes with an important message for young Indigenous women and girls. https://t.co/qxr0z48QCr

In Nuuk, Greenland, Fraser’s admirers held a memorial for her near a statue of Sedna near the city’s shoreline.

And in Iqaluit, some residents organized an informal memorial with fireworks, on the evening of Dec. 27.

The Indspire organization, which had given Fraser their youth laureate award for 2019, said they are “shocked and saddened.”

With her Sanikiluaq-based band, The Easy Four, Fraser began to build a following on YouTube about seven years ago, with Inuit-language covers of popular tunes like Folsom Prison Blues by Johnny Cash and Cherry Bomb by The Runaways. 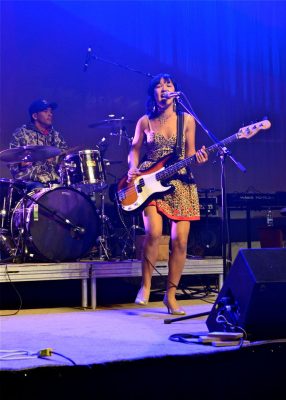 Kelly Fraser on Aug. 28, 2013, performing with her Sanikiluaq bandmates at the Aqpik Jam in Kuujjuaq. (File photo)

In January 2013, her Inuktitut cover of Diamonds, a pop ballad that had become an enormous global hit in 2012 for the Bajan singer Rihanna, went viral across the North, helping Fraser build a wider fan base.

In 2014, she and her bandmates released her first album, Isuma, which included a cover of the Charlie Adams classic, Quviasuppunga.

Her fame grew after her second album, Sedna, released in 2017, was nominated for a Juno award in 2018 in the Indigenous Music Album of The Year category.

That included a track called Fight For The Rights, which had been released as a single in 2016 to encourage a no vote in a referendum held to decide whether municipal governments should be allowed to sell municipal lands.

In an interview with Nunatsiaq News in June 2017, Fraser downplayed her role as an Inuit rights activist while at the same time saying it’s part of her message.

She also referred to a darkness that has haunted her for years.

“It feels like I’m fighting this invisible monster that’s sucking the life out of Inuit,” she told Nunatsiaq News in 2017.

She also talked openly to Nunatsiaq News about the death by suicide of her Ontario-born father, Bill Fraser, a territorial government social worker who died at age 51 in March 2010, when Fraser was 16.

In a long public statement on Facebook she posted on March 5, 2016, the anniversary of her father’s death, Fraser talked about her own struggle with depression and the life circumstances that lie behind it.

“The world is kinda messed up but doing what’s right for you and those around you, you can do it, we can help each other fight this thing called DEPRESSION, by understanding and talking,” she wrote.

“Everyone in the world, especially up north where our people suffer from the effects of colonialism and not only that, everyone of every race is capable of feeling depression from abuse, self abuse, not having what you need for you and your family to survive,” she said.

In June 2019, Fraser released an electronic dance-pop single titled Rebound Girl, produced by Marc Meriläinen of Thunder Bay and Aqqalu Berthelsen aka DJ Uyarakq of Greenland. It’s promoted with a video featuring members of the Aboriginal School of Dance.

Later in the year, Fraser, who wasn’t signed to a label, launched a Kickstarter campaign aimed at raising $60,000 to finance the production of a third major recording project: a pop, hip hop and rock album to be titled Decolonize, based on the Inuit experience of colonialism.

“By us all coming together to fund this project as Indigenous and non-Indigenous people we are doing our part for reconciliation in Canada,” she said.

She had hoped to record that album in Toronto between January and May 2020.

But by December, that Kickstarter campaign had raised only $3,042.

A GoFundMe page created by friends of Fraser’s family has raised about $40,000 to help cover the costs associated with her sudden death, including the cost of food, transportation and a memorial service.

You can make donations to it at this web page.