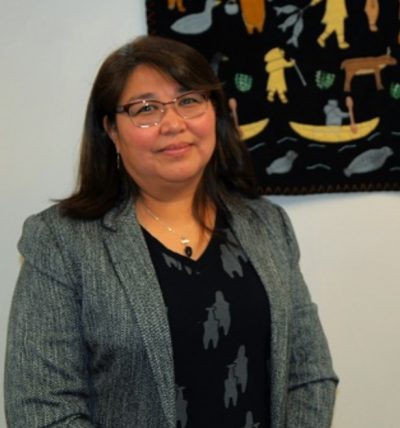 Louise Flaherty is moving from the deputy minister’s job at Culture and Heritage to become deputy minister responsible for the Department of Education, as of Dec. 17, swapping roles with Pujjuut Kusugak. (PHOTO COURTESY OF GN)

Nunavut Premier Joe Savikataaq announced an end-of-year shuffle of senior Government of Nunavut managers that will produce big changes this month at the top of the departments of Education, Environment, and Culture and Heritage, as well as at the new Department of Human Resources next year.

Flaherty will swap roles with the current deputy minister of Education, Pujjuut Kusugak, who moves over to the deputy minister’s job at Culture and Heritage.

At the Department of Environment, Pauloosie Suvega will depart as deputy minister to become the new president of Nunavut Arctic College as of Dec. 17.

Savikataaq also used the occasion to announce the official re-launch of a standalone Department of Human Resources, which will start up in April 2019.

Lorne Kusugak, who also serves as minister of Community and Government Services, has been appointed to serve as minister of Human Resources as of April 1, 2019, the premier said.

Sheila Kolola, currently president of Nunavut Arctic College, has been appointed to serve as deputy minister of Human Resources starting next week, on Dec. 17.

“I committed early in my term to the creation of the Department of Human Resources, and I am very excited to get it up and running in the next few months,” Savikataaq said in a release.

“Minister Kusugak has the skills and abilities to ensure fairness and consistency in this important portfolio, and Ms. Kolola has significant experience and success in fostering Inuit employment, training and development.”

The Government of Nunavut announced this past summer its plans to revive the Department of Human Resources,  six years after that department was dissolved in 2012.

In recent years, human resources were dealt with through the GN’s departments of Finance and Executive and Intergovernmental Affairs.

With the department back in place, the government has already highlighted Inuit employment planning as a major priority in addition to a “renewed dedication to employee wellness.”