“It was very difficult for us to make that choice” 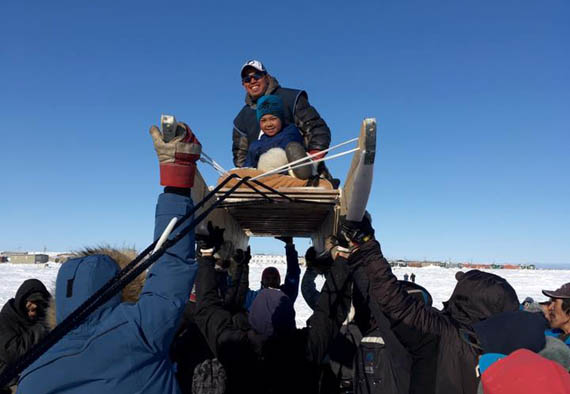 Pond Inlet musher Michael Inuarak is hoisted in the air after completing the 2017 Nunavut Quest. That year the race began in Arctic Bay and ended in Igloolik, as it would have this year, prior to the race’s cancellation to avoid the spread of COVID-19. (File photo)

The 2020 Nunavut Quest has been cancelled due to concerns about COVID-19.

“It was very difficult for us to make that choice,” said Silas Attagutsiak, who’s part of the organizing committee, over the phone from Igloolik.

Schools are closed across the territory and the Government of Nunavut’s public health emergency means public gatherings are banned and travel into the territory is restricted. The message is that Nunavummiut should stay home as much as possible.

“We really wanted to get this Quest,” Attagutsiak said, meaning that people who live in the hamlet of Igloolik wanted to host it, “but then this COVID-19 came along and it put out too many boundaries.”

Every year, the Quest runs between two of several communities in the High Arctic. This year’s race was to start on April 13 in Arctic Bay and end 500 km away in Igloolik.

This was going to be the 21st year of the Quest, but the 20th race—it was cancelled once before in 2016 because “there wasn’t enough manpower to run it,” Attagutsiak said.

The Quest is a chance for Inuit to race their dog teams. “We don’t want them to forget what it’s like to have dogs,” Attagutsiak said.

“That’s why we’re doing this in the first place.”

But the Quest is more than that. It’s also a chance for people to gather together and celebrate, and it brings money into the host communities.

“People getting together stimulates money and that’s what we were looking for, you know,” said Attagutsiak.

Despite that, he said the role of the committee is to make sure people are safe.

“That was the main concern, that the public does not get in danger because of our activity.”

There were nine mushers signed up when the race was cancelled last week, but Attagutsiak said more were going to sign up before it started.

He said they were disappointed, but “it’s very unusual living at this time for us.”

Children are not in school in Igloolik, and Attagutsiak said they’re not out and about, either.

Normally, he said, anyone who isn’t working in Igloolik would be out hunting by now, but “most of the people here are in isolation.”

Most places in Igloolik are closed, and people aren’t gathering, Attagutsiak said.

“It’s not normal at all,” Attagutsiak said.

Zipporah Oyukuluk is also on the committee. She lives in Arctic Bay, but was on the line from Ottawa.

For her, she said it wasn’t a difficult choice—the race was cancelled so people wouldn’t get COVID-19 when they gathered.

“We moved it to next year,” she said.