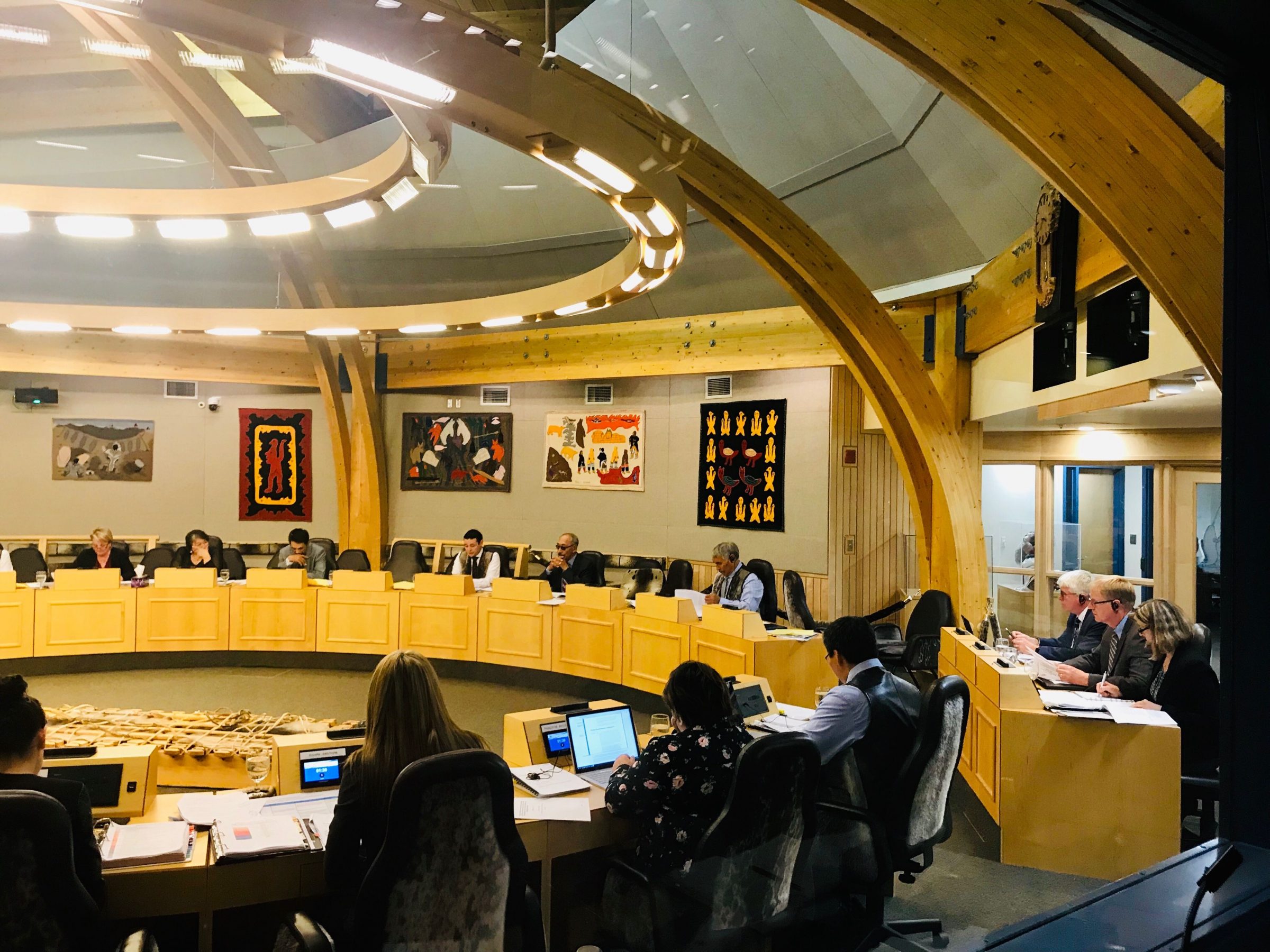 Nunavut MLAs on the Standing Committee on Oversight of Government Operations and Public Accounts met in the legislative assembly on Sept. 25 and 26 to discuss a report from the auditor general on support for high school students and adult learners. (Photo by Emma Tranter)

Nunavut MLAs took turns grilling the departments of education and family services and Nunavut Arctic College last week during a two-day sitting to discuss a report released by the auditor general in June.

The report, which was the result of a three-year audit, concluded that Nunavut’s Education Department does not adequately prepare high school students or adult learners for either post-secondary education or employment.

MLAs on the Standing Committee on Oversight of Government Operations and Public Accounts met in the legislative assembly on Sept. 25 and 26 to find out what each organization had done since the report’s initial release. McKenzie joined the committee’s discussions along with other staff from the auditor general’s office.

At the time of the audit, 18 out of 22 positions were unfilled in the Education Department’s educator development division, which is responsible for training school staff on the department’s directives and improving teaching practices.

Tracey MacMillan, assistant deputy minister of education, said the department has created a new curriculum transition team since the audit was released.

“They will look at supporting all of our high school students’ transition into areas of work, including cooperative experiences, hands-on learning, and continuing to expand in that area. So it was a valid area to be examined,” MacMillan told the committee.

MacMillan also noted the department had filled four of the 18 vacant positions in the educator development division.

The report states that 39 per cent of students enrolled in Grade 10, 11 or 12 had been enrolled in the same grade the year before. Of the students who took more than one year to complete a grade, one-third would leave school before finishing that grade.

Adam Lightstone, MLA for Iqaluit-Manirajak, noted that the department does not keep track of high school dropout rates in the territory.

“In future reports this will be considered,” MacMillan said.

Lightstone’s questions led to a similar interrogation from John Main, chair of the committee and MLA for Arviat North-Whale Cove, who said his home community of Arviat has experienced “substantial cuts” to teacher numbers and a high student dropout rate after the beginning of the school year.

“The first couple of weeks, school attendance is very high, but because the allocation of teachers is not based on just those couple of weeks at the beginning of the school year … the teachers are swamped and their classes are way too big and they don’t have enough teachers if those kids keep showing up,” Main said.

“If they keep showing up, they don’t have enough staff to handle them, and so poor attendance is kind of baked into the system,” he added. “This is how screwed up things are, when you mention the actual reality on the ground in the communities.”

Both Lightstone and Main criticized the department’s use of the student-educator ratio, a calculation used to determine the number of teachers assigned to each school by calculating the number of students who attend a school divided by the number of educators in the institution.

MacMillan said she would get back to the committee with a timeframe on when changes might be made to the student-educator ratio.

Also at that time of the audit, the Education Department did not have formal guidance counsellor positions in the schools. Two of the seven schools had assigned teachers to provide guidance and advice to students.

“I’m just curious to know if there are any new guidance counsellors in the schools and how many in the communities?” Margaret Nakasuk, MLA for Pangnirtung, asked MacMillan.

“Currently we have five guidance counsellors in our schools; two in the Qikiqtani region, two in the Kivalliq region, and one in the Kitikmeot,” MacMillan replied.

Lightstone asked MacMillan if the department would commit to also removing school counsellors from the student-educator ratio.

“I for one believe it would be in the government’s best interest if these guidance counsellors were removed from the student-educator ratio to ensure that principals and DEAs don’t have to make that tough decision whether they should support their high school students in achieving or completing their diploma,” Lightstone said.

“We’re definitely considering that. However, at this time we cannot make any commitments,” MacMillan said.

Also at the time of the audit, only one school in the territory, in Kugluktuk, had a pre-trades program. In response to the report’s call for more hands-on learning opportunities in the territory’s high schools, MacMillan said new work-experience programs will be field-tested at high schools in Baker Lake and Igloolik this school year.

Main asked McKenzie if he had any comments on how the Department of Education could retain staff in its own department.

“I know that the report says, ‘You need a strategy,’ and the department has said, ‘Yeah, we’re going to get a strategy.’ OK. Beyond that, aside from the whole strategy piece, observations or comments you might have?” Main said.

McKenzie said the department needs to recognize the role it plays in supporting not only students, but also teachers.

“The more support that can be put in place for the teachers, I think, would ultimately help potentially in terms of the retention of those teachers,” he said.

Several MLAs also questioned the college over the report’s finding that its Adult Basic Education program, which provides adult learners with similar courses to what is available in the territory’s high schools, was not offered in most of Nunavut’s communities over the last five years.

Paul Quassa, MLA for Aggu, asked Pauloosie Suvega, president of Nunavut Arctic College, to explain why the program was so rarely offered.

“Some of the reasons are budgets as sometimes it does not fit in the budget,” Suvega said, adding that the college plans to work on new partnerships with other post-secondary institutions as well as Inuit organizations to implement the program.

The report notes that at the time of the audit, the GN was reviewing the Education Act. The audit did not examine federal training programs funded by the federal government or the activities of district education authorities.