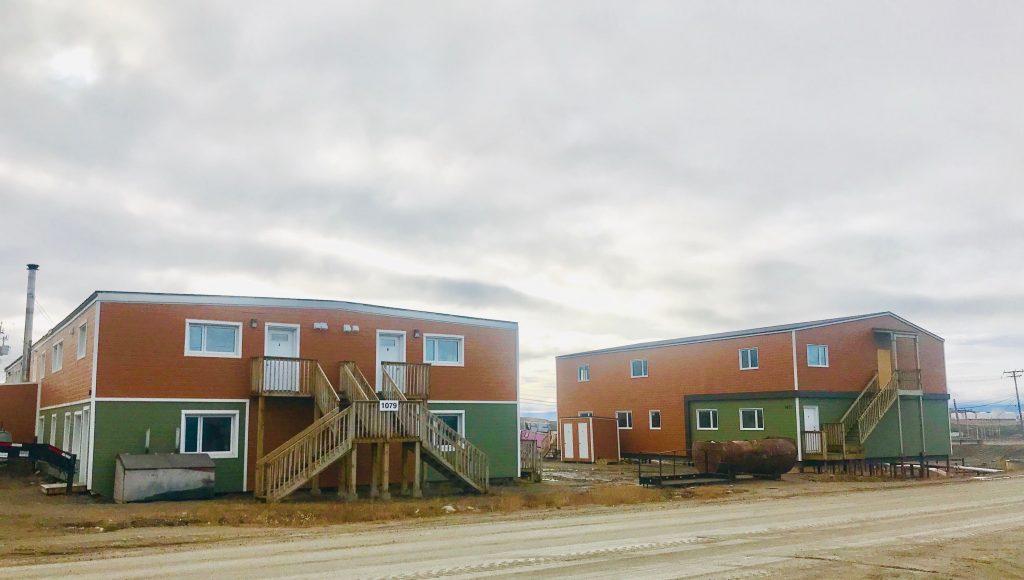 Buildings 1077 and 1079 in Iqaluit will serve as transitional housing, office and programming space for the Uquutaq Society early next year. (Photo by Emma Tranter)

Nunavut’s first transitional housing project, run by the Uquutaq Society, is set to open in Iqaluit early next year.

Uquutaq’s application for the $6.5-million project was recently approved by the Canada Mortgage and Housing Corporation under the National Housing Strategy’s Co-Investment Fund.

“This approval represents the next chapter for Uquutaq Society, and is the primary source of the funding for the much-needed expansion of our services,” Uquutaq said in a news release.

With the application approved, Uquutaq will purchase buildings 1077 and 1079. One of those buildings will house 60 men, said Laurel McCorriston, the Uquutaq Society’s executive director, while the other building will be used as office and programming space for the society.

The multi-stage housing and program support will help Uquutaq’s clients transition from the shelter to permanent housing, McCorriston said.

“For some it might not hit until we actually move. It’s really the first indication they have that things are changing,” McCorriston said.

McCorriston added that men who use the shelter stay for an average of four years, with half of those clients coming from outside Iqaluit.

Madeleine Redfern, Iqaluit’s mayor, was extremely pleased Uquutaq’s application was approved. It’s something she and the city have been working on since May 2016.

Back then, the city received money from the federal government to fund a feasibility study to identify various options for a new facility.

“For Uquutaq, the priority was getting a new building, given that there was serious overcrowding at the four-bedroom house.”

At a city council meeting earlier this year, Uquutaq said they were providing shelter to 42 men a night in the city.

The society’s current facility houses about 20 men, meaning the shelter was constantly at capacity and faced overcrowding.

“The city again worked to secure funding for the development of a business case. That business case helped provide the tools to be able to lobby politically and be able to secure donations and funding. Approximately $2 million was secured for down payment and start-up costs,” Redfern said.

In the summer of 2018, the city and Uquutaq submitted that business case to the federal government’s Co-Investment Fund, which was approved.

Redfern said all levels of government agreed that Uquutaq’s space needed to be expanded.

“We were extremely fortunate that almost every minister and federal member of Parliament and senior bureaucrat who came up to visit were given a tour of the facility. Minister Bennett in particular was extremely supportive,” Redfern said.

“It was recognized that there was a need, but at the same time what’s incredibly important is to ensure that we were able to provide a solution that government and donors can back,” she added.

“The additional new funds for this year went to Uquutaq in part because they were getting the new buildings and increasing their programming from the emergency shelters to transition housing program.”

“Everything is in place now to proceed with the acquisition of the buildings and the renovations,” Redfern said.

The facility is expected to open in March 2020.