“We have this momentum which is just getting started” 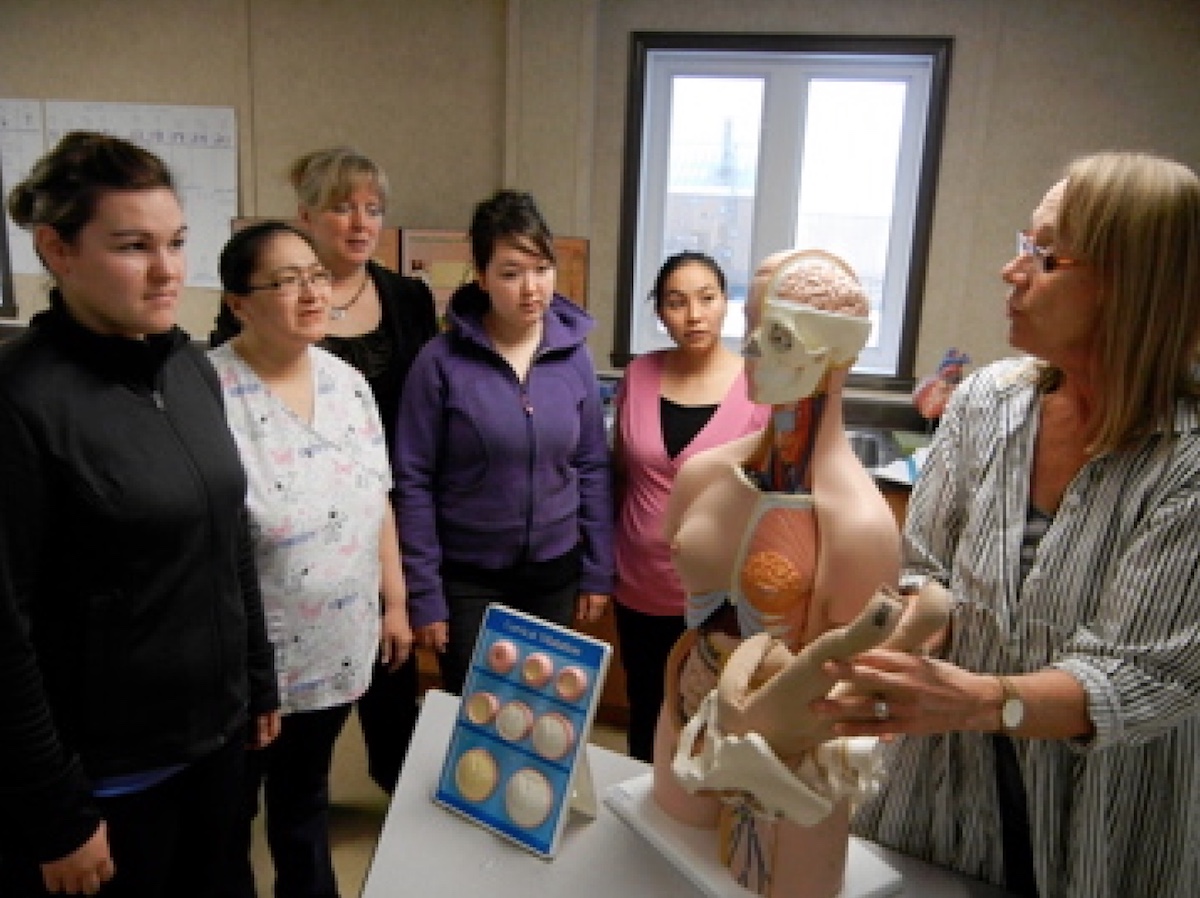 Instructor Elizabeth Hadlari uses a model of a woman’s body as a teaching tool during a 2011 session with students in a Nunavut Arctic College maternity care worker program in Cambridge Bay. That program, and a similar one in Rankin Inlet, produced a handful of midwives for the two communities. (Photo by Jane George)

The recently released final report from the National Inquiry into Missing and Murdered Indigenous Women and Girls includes a recommendation for improved midwifery services for Inuit by Inuit.

As things stand, only half the midwife positions in Nunavut are staffed.

Of the 10 indeterminate registered midwife positions in Nunavut, only five are filled, Health Minister George Hickes said last week in the territorial legislature.

As well, there are no midwives at all in the Baffin region, the most populous of the territory’s three regions.

But Hickes still insisted, during a later interview focusing on midwifery in Nunavut, that there’s a momentum to build up midwifery in the territory. He said the MMIWG report’s recommendation will provide an additional incentive.

Hickes pointed to a pilot project in Cambridge Bay, which sees the three midwives based at the Kitikmeot Health Centre visiting the outlying communities in that region to work with expectant mothers.

This has already produced positive results on birth weights and breastfeeding, he said.

But ramping up midwifery has been a challenge due to the lack of patient boarding homes. That’s key to bringing pregnant women from, say, Kugaaruk to deliver in Cambridge Bay, or from Naujaat to deliver in Rankin Inlet.

Hickes said that his department is now looking at the feasibility of boarding homes in Cambridge Bay and Rankin Inlet with the federal government.

“At some point it has to happen,” he said.

Especially in Rankin Inlet, the presence of a boarding home will alleviate pressure on patient services in Winnipeg, he said.

As for Iqaluit, there are no midwives at all, although the services of birth support coaches, or doulas, are available.

There is no easy answer as to why there no midwives in Iqaluit, Hickes said.

But he said there is a proposal for a birthing centre in Arviat, where roughly 70 babies are born every year.

“We have this momentum which is just getting started,” Hickes said.

But more than 10 years ago, there was a more visible effort by Inuit women to bring back midwifery to the territory. This led to the 2008 Nunavut Midwifery Act.

The course flowed out of Nunavut’s maternal and newborn health strategy for 2009-14 in which Tagak Curley, who was then health minister, promised that “we seek to bring birth back to our communities.”

Courses for a Maternity Care Worker certificate were offered in Cambridge Bay and Rankin Inlet as the first year towards a three-year diploma in midwifery, which in turn could eventually be part of a degree in that field.

The maternity care workers partnered with registered midwives and other care providers to assist in community wellness programs, providing a range of prenatal and postnatal resources and family support.

The plan was to see midwifery graduates meet standards set by the Canadian Midwifery Regulatory Committee and provide care that is “culturally appropriate for and acceptable to the residents of Nunavut.”

The midwifery courses have not been repeated and, in the two communities with midwives, there is still no obligation for women with low-risk pregnancies to deliver there with midwives.

Hickes said it’s unlikely that this would be mandatory in the near future.

Midwives deliver about a third of the births in Cambridge Bay and Rankin Inlet, he said.

The Health Department couldn’t immediately say how much it costs every year to bring expectant mothers and their escorts to deliver outside the territory because most of these costs are covered by the Non-Insured Health Benefits Program for Inuit.