A story from the Fifth Thule Expedition 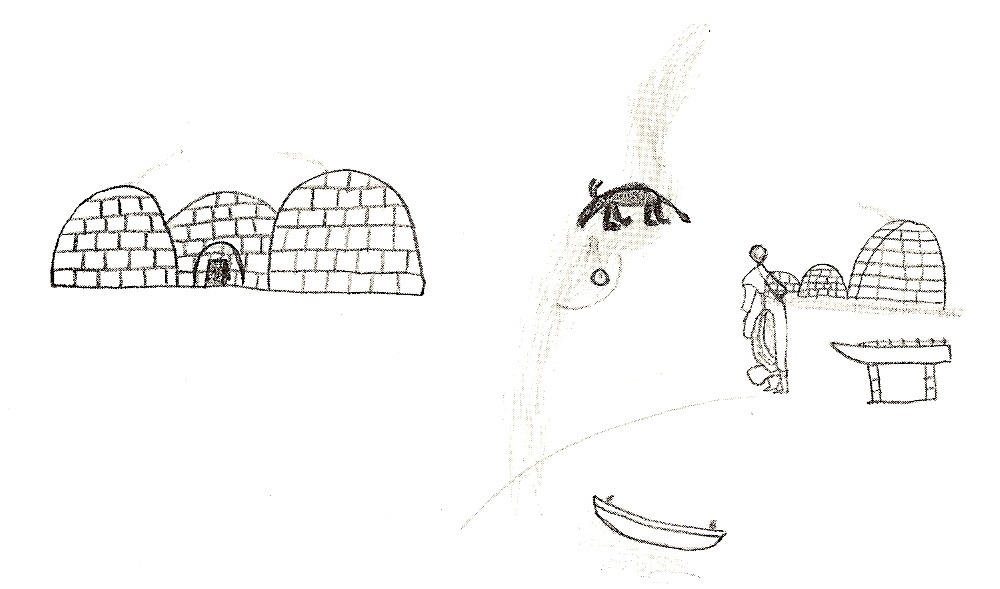 A four-legged mountain spirit seen outside the snowhouses one dark evening at Aua’s camp. Drawn by Apak, Aua’s daughter. (Drawing from “Intellectual Culture of the Iglulik Eskimos, Report of the Fifth Thule Expedition, Vol. 7, no. 1,” facing page 129)

Knud Rasmussen made two extended visits to the camp of the shaman Aua, as well as hosting the old man and his wife at expedition headquarters at Danish Island. On these occasions the aging shaman shared his wisdom with the enquiring ethnologist.

Inuit life had been governed by a complex system of taboos that regulated behaviour. Inuit, guided by their leaders, of course knew what had to be done in any given situation. But Rasmussen wanted to know more than what actions were required — he wanted to know why.

The Inuit, frustrated, could often give no answer. And Rasmussen, perhaps equally frustrated, wrote, “They regarded it as unreasonable that I should require not only an account, but also a justification, of their religious principles.”

One evening, tired of the repeated question of “Why,” Aua suddenly invited Rasmussen to follow him outside, where a storm was raging.

Aua calmly remarked, “In order to hunt well and live happily, man must have calm weather. Why this constant succession of blizzards and all this needless hardship for men seeking food for themselves and those they care for? Why? Why?”

At just that time hunters were returning unsuccessfully from a day’s hunting for seals. Aua turned the tables again, and asked his companion, “Why?” Rasmussen had no answer.

The shaman led him to Kublo’s snowhouse where the qulliq gave little light and his children shivered under a skin blanket.

“Why should it be cold and comfortless in here?” the shaman asked.

“Kublo has been out hunting all day, and if had got a seal, as he deserved, his wife would now be sitting laughing beside her lamp, letting it burn full, without fear of having no blubber left for tomorrow. The place would be warm and bright and cheerful, the children would come out from under their rugs and enjoy life. Why should it not be so? Why?”

At the dwelling of his sister Natseq, Aua asked, “Why must people be ill and suffer pain? We are all afraid of illness. Here is this old sister of mine; as far as anyone can see, she has done no evil; she has lived through a long life and given birth to healthy children, and now she must suffer before her days’ end. Why? Why?”

They returned silently to Aua’s snowhouse.

“You are equally unable to give any reason when we ask you why life is as it is. And so it must be. All our customs come from life and turn towards life. We explain nothing; we believe nothing. But in what I have just shown you lies our answer to all you ask.

“We fear the weather spirit of earth, that we must fight against to wrest our food from land and sea. We fear Sila.”

“We fear dearth and hunger in the cold snow huts.”

“We fear Takannakapsaaluk, the great woman down at the bottom of the sea, that rules over all the beasts of the sea.”

“We fear the sickness that we meet with daily all around us; not death, but the suffering. We fear the evil spirits of life, those of the air, of the sea and the earth, that can help wicked shamans to harm their fellow men.”

“We fear the souls of dead human beings and of the animals we have killed.”

“Therefore it is that our fathers have inherited from their fathers all the old rules of life which are based on the experience and wisdom of generations. We do not know how, we cannot say why, but we keep those rules in order that we may live untroubled. And so ignorant are we in spite of all our shamans, that we fear everything unfamiliar. We fear what we see about us, and we fear all the invisible things that are likewise about us, all that we have heard of in our forefathers’ stories and myths. Therefore we have our customs, which are not the same as those of the white men, the white men who live in another land and have need of other ways.”

Aua had explained clearly and succinctly to Rasmussen why his question must remain unanswered.

On another, Aua explained some facts about death to Rasmussen.

“We ignorant Eskimos living up here do not believe, as you have told us many white men do, in one great solitary spirit that from a place far up in the sky maintains humanity and all the life of nature. Among us, as I have already explained to you, all is bound up with the earth we live on and our life here; and it would be even more incomprehensible, even more unreasonable, if, after a life short or long, of happy days or of suffering and misery, we were then to cease altogether from existence. What we have heard about the soul shows us that the life of men and beasts does not end with death. When at the end of life we draw our last breath, that is not the end. We awake to consciousness again, we come to life again, and all this is effected through the medium of the soul. Therefore it is that we regard the soul as the greatest and most incomprehensible of all.”

It was unusual, though, to think of such things, Aua explained.

“In our ordinary everyday life we do not think much about all these things,” he said.

“And it is only now you ask that so many thoughts arise in my head of long-known things; old thoughts, but as it were becoming altogether new when one has to put them into words.”