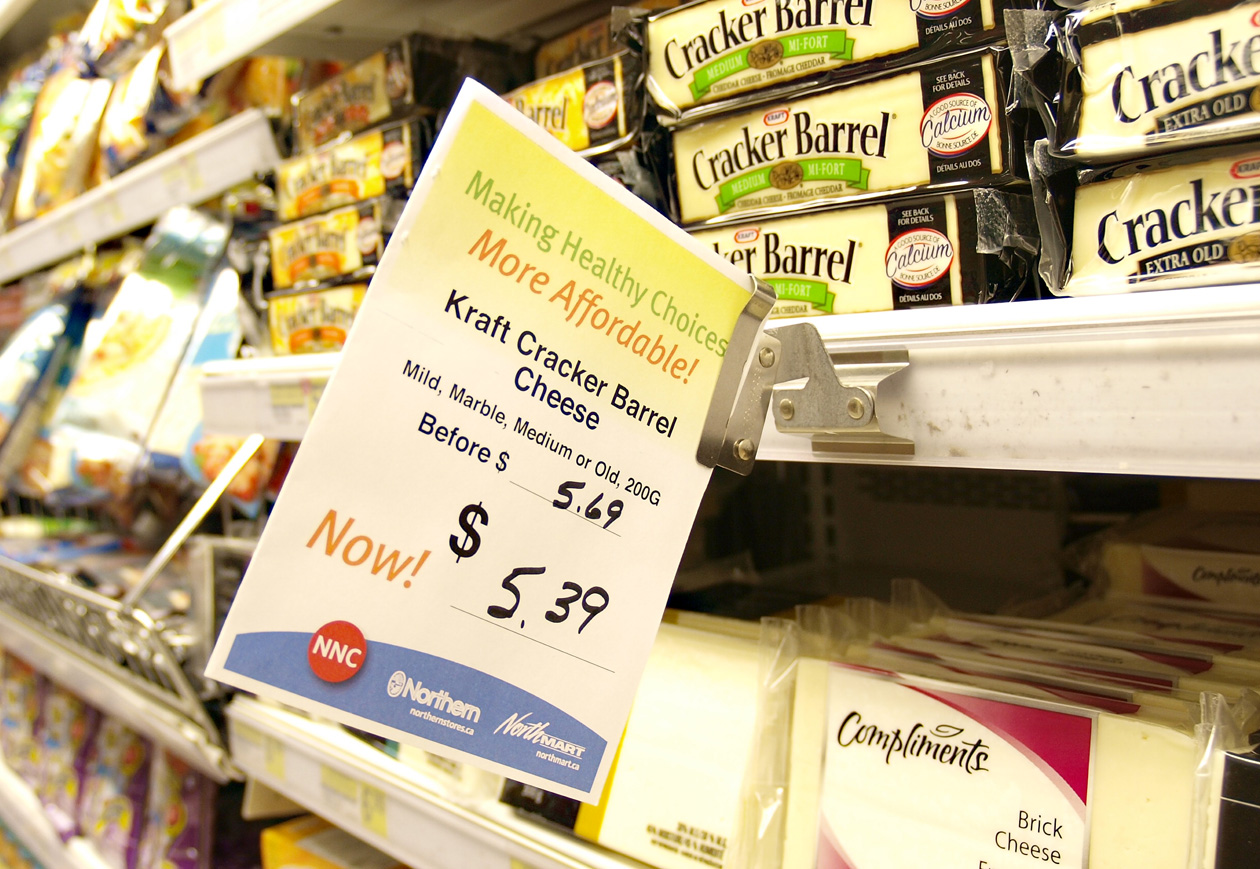 A scene inside the Iqaluit Northmart store in 2011. The federal government is targeting what it calls “family-friendly” nutritious food and “northern staples” in its long-awaited revamp to the Nutrition North Canada program. (FILE PHOTO)

The federal government is targeting what it calls “family-friendly” nutritious food and “northern staples” in its long-awaited revamp to the Nutrition North Canada program, which Labrador MP Yvonne Jones, the parliamentary secretary to Northern Affairs Minister Dominic LeBlanc, announced today in Iqaluit.

The new measures include a high-level subsidy rate that increases existing subsidies on items like milk and infant formula by 25 per cent.

“The measures combined are intended to have a greater impact on providing fresh, nutritious and perishable food that is more affordable in the North,” a Northern Affairs spokesperson said in a not-for-attribution briefing.

These and other actions, however, are “short-term,” the federal spokesperson said.

And the federal government is offering few details on its new harvesters support program, which was announced this past November with Finance Minister Bill Morneau’s fall economic update.

Under it, the federal government will spend $62.6 million over five years, starting April 1, 2019, to help country food harvesters.

But the Northern Affairs spokesperson said Indigenous organizations will play a big role in managing that money.

To that end, an existing Indigenous working group will continue to look after the interests of First Nations and Métis communities that are covered by Nutrition North.

And a new body, an Inuit-Crown food security working group, will look after Inuit interests and “work towards a sustainable food system in Inuit Nunangat,” the government announced.

Today’s announcement, however, does not go far enough in ensuring transparency and ensuring that retailers pass the full benefit of the Nutrition North subsidy to their customers, some critics say.

After today, Ottawa is still not requiring that retailers like North West Co. disclose to the public the real freight rates that they negotiate with airlines, the critics say.

The CIRNAC spokesperson responded, however, by saying that all retailers must subject themselves to audits performed by third-party auditors.

In those audits, retailers must disclose all information to the auditor, including the prices they pay the airlines and their profit margins on food sales, the spokesperson said.

But Tracey Galloway, a professor at the University of Toronto, said the measures announced today fail to make retailers accountable and that Nutrition North is a “public policy disaster.”

“The federal government chose instead to window-dress the problem with changes that ensure government money continues to flow into the coffers of a few retail corporations, rather than into the pockets of hard-hit, northern consumers,” Galloway said in an op-ed that will be published later in Nunatsiaq News.

The president of Nunavut Tunngavik Inc., Aluki Kotierk, also said “much more is needed to ensure full NNC subsidies are passed on to consumers.

“This includes working collaboratively with Inuit on the issue of food insecurity in the North,” she said.

“I was happy to hear that today’s federal announcement on the Program included a subsidy on more household necessities like diapers and infant food,” Savikataaq said in a statement.

“However, it is not clear that the proposed changes will provide a significant increase in the availability and accessibility of healthy, nutritious foods to Nunavut families,” he said.

But the former Liberal senator dumped on Stephen Harper’s Conservative government for introducing Nutrition North in 2011.

“The previous Food Mail program was better for Inuit. I don’t know why the Harper government decided to scrap that program when it wasn’t broken,” Watt said.

At the same time, he said he looks forward to a “necessary and foundational systemic changes to NNC so it evolves into an accountable, transparent social program that reduces food insecurity in Inuit communities.”

Bigger subsidies in all categories

The measures announced today include the following:

• A new, highest-level subsidy rate that targets nutritious items like milk, frozen fruit, frozen vegetables, infant formula and infant food. For these items, it’s 25 per cent greater than before.

• An increase in the Level 1 subsidy rate by at least 15 cents per kilogram, ranging up to $2 per kilo in some communities.

• In 76 eligible communities, per-kilo Level 2 subsidy rates will rise to at least $1 per kilo. In some First Nations communities in northern Ontario, subsidies had been as low as five cents per kilo. They’ll now get the minimum $1 per kilo.

• Greater flexibility for northerners who make direct orders from suppliers, including more options for payment, such as e-transfers, credit cards, cheques and cash.

• Expanding the list of eligible southern suppliers to provide northerners with more choices.

• Restaurants not open to the public, such as those located within hotels, will no longer be eligible for subsidies.

• A communications effort to bring more information to communities, so they have a better understanding of how the program works and how its transparency measures work.

• New authority to allow immediate action when a community suddenly becomes dependent year-round on air freight, due to an emergency.

• A review of every community’s supply chain.