Ottawa Inuit team up with other Indigenous orgs on human trafficking 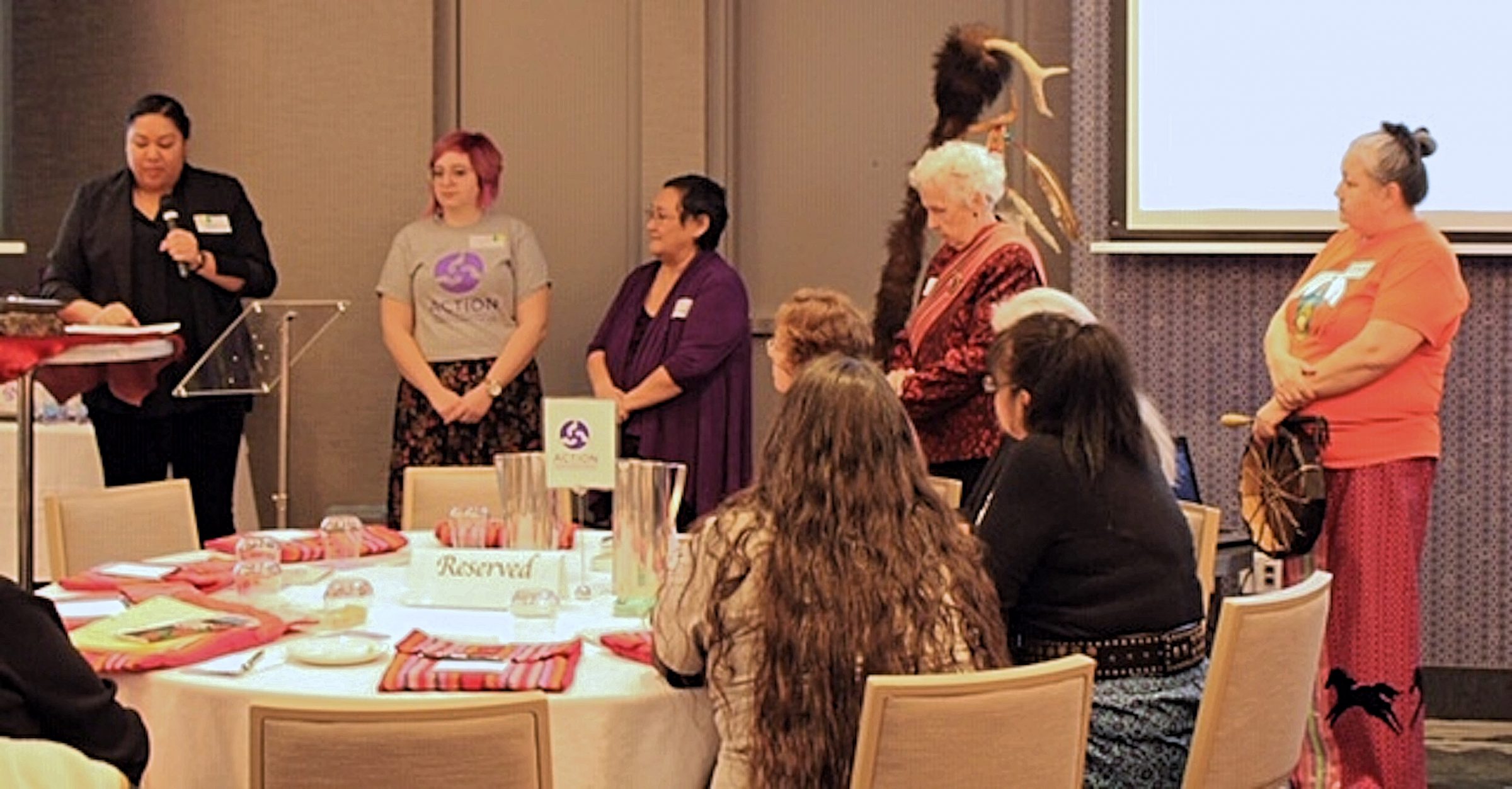 Jennisha Wilson, left, and Kayla Spagnoli, second from left, host the first anti-human trafficking event held by Ottawa’s new Anti-violence and Coercion Taskforce for Indigenous Organizations and Networks, or ACTION, on Feb. 22. Beside them are Inuit, Métis and First Nations elders who opened the day’s events. (Photo courtesy of ACTION)

Jennisha Wilson—Tungasuvvingat Inuit’s manager of sex work, exiting the sex trade and exploitation projects in Ottawa—has had many people walk through her door over the years.

And if there’s one common thread with Wilson’s cases, it’s that their experiences are never simple.

But that can be hard to recognize, when the words “human trafficking” bring up so many assumptions and stereotypes.

“People assume, ‘oh my gosh, it’s a stranger who takes somebody, kidnaps them, ties them up’ … they think of human trafficking like they see it in news from other countries,” Wilson said.

But “there is no one that comes to our door that has the same story.”

Even the term creates problems, because most people don’t know what it means. And “human trafficking” doesn’t translate into Inuktitut or many other Indigenous languages, making difficult conversations with Indigenous communities that much harder.

“If the concept doesn’t make sense, then people are not going to be receptive to the idea,” Wilson said.

Public Safety Canada describes human trafficking as: “The recruitment, transportation, harbouring and/or exercising control, direction or influence over the movements of a person in order to exploit that person, typically through sexual exploitation or forced labour. It is often described as a modern form of slavery.”

But, after reaching out to the Ontario Inuit community, TI found that words like violence, coercion and being taken advantage of made more sense. And it helps people see forms of Indigenous human trafficking they don’t initially think of, like exploitation through drugs or organ-trafficking.

These words also help people see commonly thought-of forms of trafficking, like the sexual exploitation of women or youth, with more nuance.

For example, in Ottawa, women who are forced into commercial sex aren’t simply snatched from their community. With poverty (69 per cent of Ottawa Inuit earn less than $20,000 per year) and unemployment (nine times higher than the non-Inuit population) in the city, these women often rely on their exploiter for meals and a bed.

And when it comes to youth, often brought south by child services, being trafficked is a subtle process that preys on disconnection from family and community.

Traffickers, who Wilson stresses can be young as well, target care homes knowing these youth are craving connection.

“So I’ve seen lots of situations with the youth that are in care that come through our doors, that say I had a boyfriend or I had a friend that took care of me when I had nobody else, or was my friend when I had no other connections … come to a party and asked me to engage in commercial sex exploitation.”

Another issue exaggerates the dangers, too: when people think of human trafficking, “they don’t think of an Inuk.”

Wilson believes that, by not recognizing Indigenous stories, it erases the believability of those stories. That’s especially dangerous when 51 per cent of trafficked women in Canada are Inuit, First Nations and Métis.

History adds another layer to the situation: when exploitation is made part of a people’s story, communities won’t recognize human trafficking for what it is.

“It’s hard for people to pinpoint something that isn’t right, especially when it’s something ingrained in your history,” Wilson said.

Wilson uses examples like the dog slaughters, forced relocation and the practice of putting Inuit on display in zoos in the nineteenth century to demonstrate historical exploitation and explain how Inuit trafficking is normalized.

“And for external people, who don’t want to reconcile that Canada has that colonial history, it’s hard for them to see that we’ve been participating in a colonial form of trafficking as well,” said Wilson.

Understanding this history also challenges assumptions around why Indigenous people are trafficked today. When an Inuk is taken advantage of, it’s popular to assume it happened because that person moved south to a big city. The person being trafficked is painted as naive.

But racism and colonialist systems force people into unsafe spaces.

For example, Wilson describes a less-known form of trafficking, which happens to Inuit artists with addictions or mental health issues who move south. These artists are targeted by sellers, who exploit these artists with drugs and alcohol to make a better profit.

Exploitation doesn’t happen because artists aren’t prepared to do business, but because they’re actively being sought out to be taken advantage of.

Even just being visibly Indigenous can be dangerous. Many Inuit women have come to Wilson and said that “people would literally pull over and ask them for sexual favours or try to pick them up or harass them” on Montreal Road, a downtown area.

Over the years, Wilson has faced another obstacle in the fight against Indigenous human trafficking: the people in charge of change don’t reflect the people who, disproportionately, live the issue.

“We were finding in Ottawa that there wasn’t a lot of space being carved out by mainstream organizations for Indigenous organizations,” Wilson said.

But how can Indigenous human trafficking be tackled, if Indigenous voices aren’t invited to the table? One answer: Ottawa’s new Anti-violence and Coercion Taskforce for Indigenous Organizations and Networks, or ACTION.

“After two years of being kind of marginalized in those spaces,” Wilson said, “I suggested that perhaps our efforts are better put together as Indigenous groups.”

Founded in late 2018, the task force is a gathering space for members of different Indigenous organizations tackling Indigenous human trafficking, and creates opportunities to share resources and knowledge.

Wilson co-chairs the task force, along with Kayla Spagnoli from Minwaashin Lodge.

“When we’re sitting at the table together, people who no longer feel tokenized, they feel as though they’re appreciated, their perspectives are being validated,” Wilson said.

And, because members come from different Inuit, First Nations and Métis backgrounds, the task force can have more respectful conversations around the unique needs in different cultural contexts.

The event brought Indigenous organizations and community members from all over Canada, featured keynote speaker Percy Lezard of the University of Manitoba and comments from Ontario’s minister of children, community and social services, Lisa MacLeod.

Wilson uses that day as an example of ACTION’s passion, because the task force put together the event in one month.

“I don’t think that you get that kind of dedication and information if you’re not invested so much in the topic,” Wilson said.