Parts of Nunavut, Nunavik to be treated to ‘ring of fire’ solar eclipse Thursday

‘If people want to see a fantastic solar eclipse, this is the time to do it’ 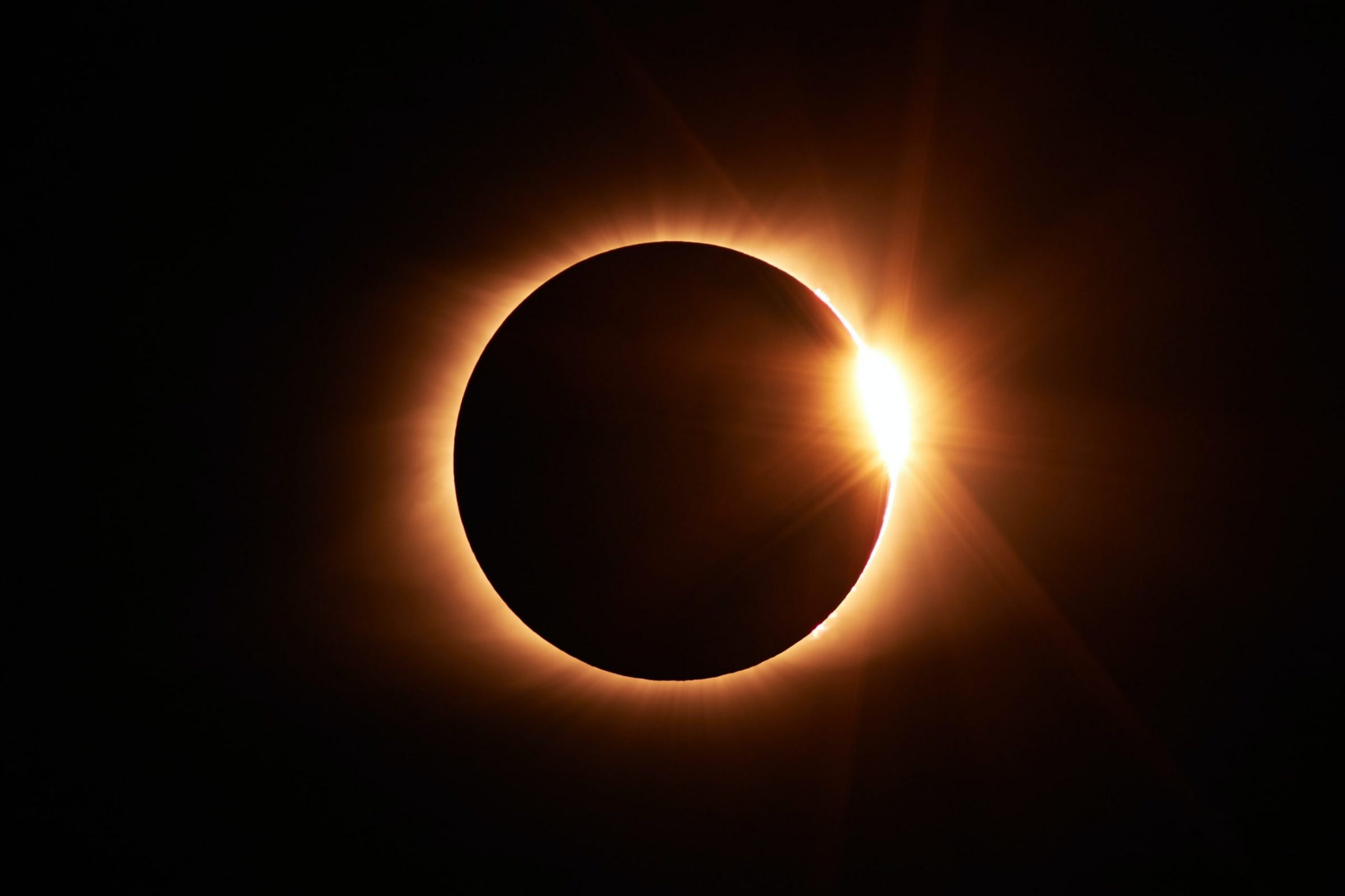 Unlike the total eclipse seen across many parts of the world in 2017, Thursday’s eclipse will be what’s known as an annular eclipse. During the height of the eclipse the moon won’t block out the sun entirely but rather create an annulus or ring. (Photo by Jongsun Lee on Unsplash)

Residents across parts of Nunavik and Nunavut have a chance to experience a rare solar eclipse early Thursday.

“If people want to see a fantastic solar eclipse, this is the time to do it,” said Mike Reid, a public outreach coordinator at the University of Toronto’s Dunlap Institute for Astronomy and Astrophysics.

In Iqaluit, that specific time is 6:06 a.m., though that will change based on geographic location.

To find the exact timing of the eclipse at your location, view the map here.

Unlike the total solar eclipse that appeared over many parts of North America, including Iqaluit, in 2017, Thursday’s event is what’s known as an annular eclipse because during the height of the eclipse the moon won’t block out the sun entirely but rather will create an annulus, or ring.

“You’ll get this gorgeous ring of fire effect, where the moon reveals just the ring around the edge of the sun and you will be among the only people on the planet to see it, so you will be very, very lucky,” said Reid. 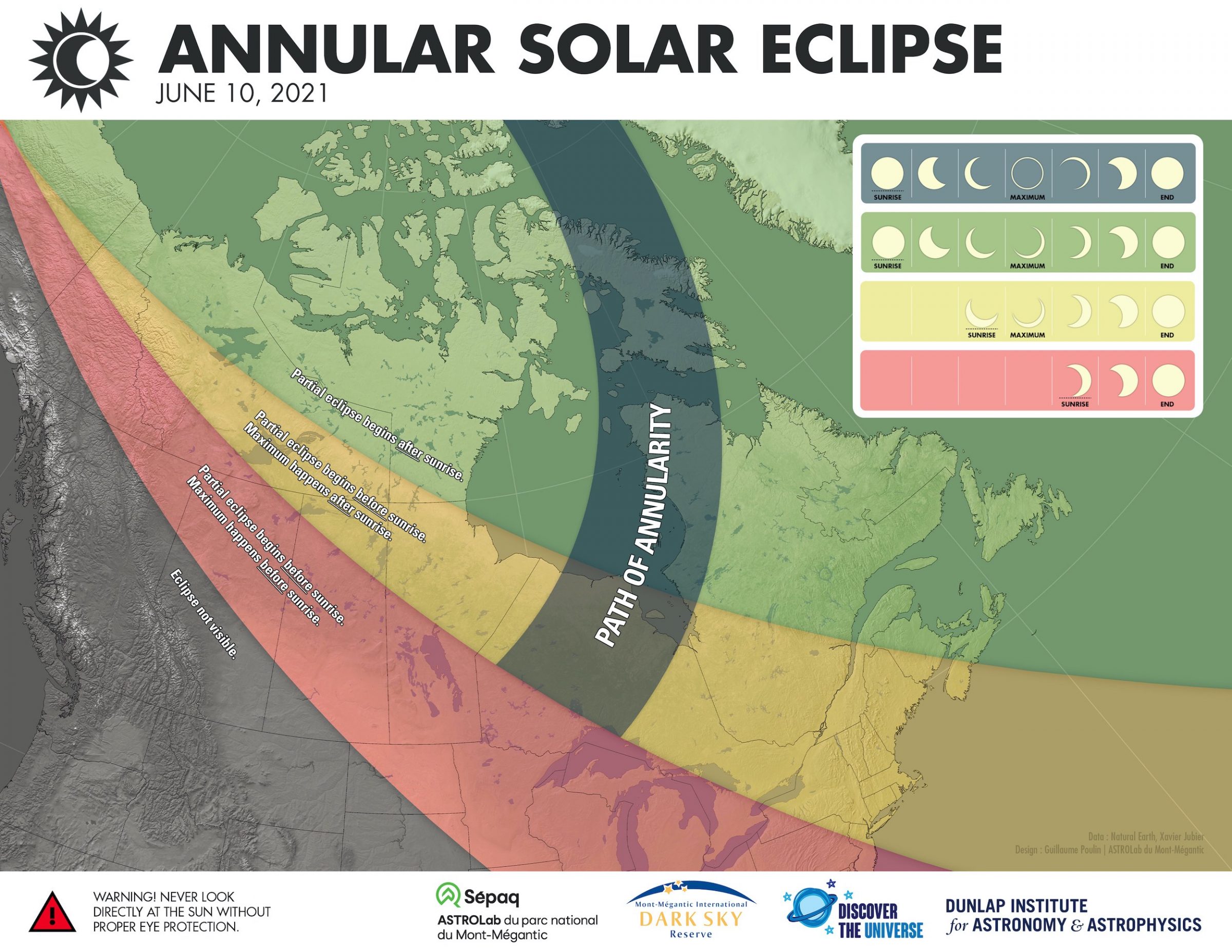 This map shows the visibility of the June 10 annular solar eclipse. The inset shows the portion of the eclipse that will be visible from within each coloured band. Only those in the shaded Path of Annularity will be able to see the fully annular “ring of fire” phenomenon. (Image courtesy of the Dunlap Institute for Astronomy and Astrophysics)

But to actually view the eclipse requires special viewing glasses, Reid said. Without them, the visible light from the sun can cause permanent eye damage.

In April, the Dunlap Institute sent roughly 4,500 eclipse viewers and educational materials to different locations in Nunavut, including five schools in Iqaluit.

For people who don’t have specialized protective eyewear, Reid says that the easiest and safest way to see the event is through projecting sunlight onto a surface.

“Get anything with a small hole poked in it, you can even use a colander or strainer or even just a piece of paper with holes poked in it and you just sort of hold it perpendicular to the sun so the light from the sun shines through it,” he said.

The result will be an image of the eclipse on the surface the light is shining on.

Of course, being able to experience the eclipse depends on the weather.

As of Wednesday afternoon, Environment and Climate Change Canada’s hourly weather forecast for Iqaluit called for a mix of sun and cloud until 6 a.m. on Thursday, at which point the forecast changes to mostly cloudy followed by a chance of showers by 8 a.m.

“If people are OK getting up early and going out and maybe waiting for the clouds to part, it’s super worth it because you don’t get very many opportunities [to see this] in your life,” Reid said.

More information on viewing the eclipse can be found here in Inuktitut and here in English.