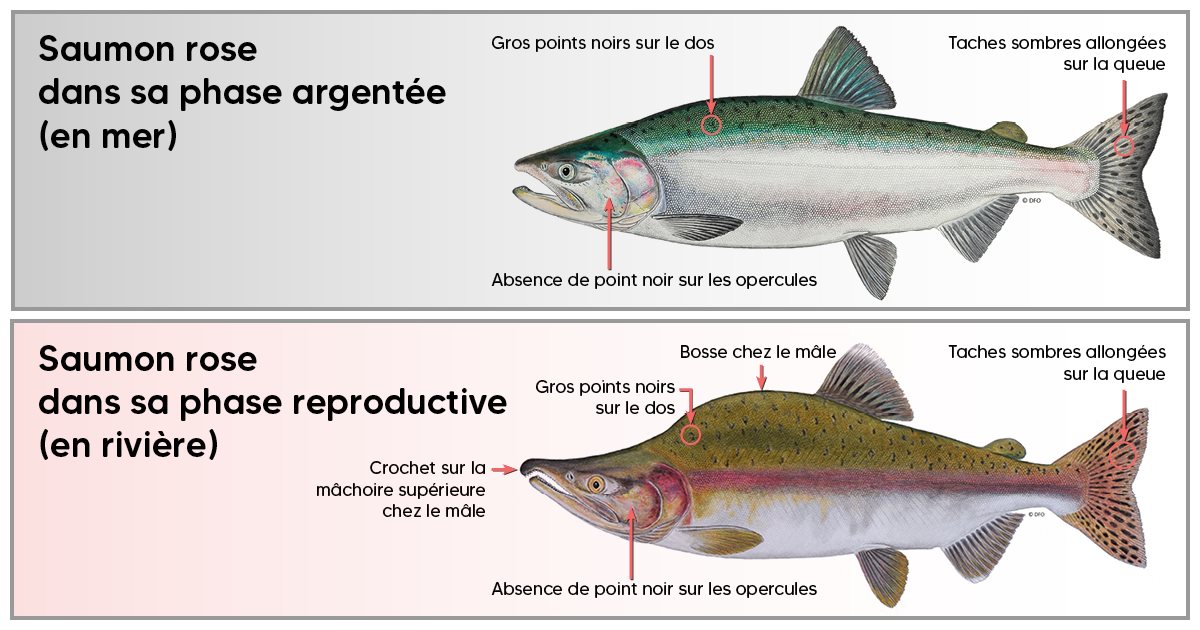 If you see this fish in Nunavik waters, Quebec wildlife officials want to know. This image from Quebec’s wildlife department shows how, in the ocean (top) pink salmon are bright-silver fish. After returning to their spawning streams, however, their colour changes to pale grey on the back with a yellowish-white belly (bottom), although some turn an overall dull-green colour. (Image courtesy of the Ministry of Forests, Wildlife and Parks)

After learning about catches of pink salmon near Salluit, Quebec wildlife officials, eager to know more about the salmon’s appearance in Nunavik waters, are urging any fishers who net the newcomers to report their catch.

Two pink salmon were netted in Nunavik during the summer of 2019 in the Ungava Bay region, one near Kangirsuk, and another near Kangiqsualujjuaq.

This year, two pink salmon were caught near Salluit.

“These are the first official records of this invasive alien species in Quebec. Our team would like to paint a current picture of the situation,” said a notice from the Quebec’s ministry of forests, wildlife and parks, which was circulated on social media.

If you think you have caught a pink salmon, the wildlife ministry officials hope you take a photo of the fish and contact them by email at observations_eae@mffp.gouv.qc.ca or by phone at 1-877-346-6763.

Or you can also freeze the entire fish and send it to the Nunavik Research Centre in Kuujjuaq.

There, your contacts are Lilian Tran or Peter May, who can be reached by email at pmay@makivik.org and ltran@makivik.org or by phone at 819-964-2925.

Meanwhile, many biologists are studying pink salmon as a way of gaining insight into warming temperatures in the Arctic.

“Due to their short, two-year life cycle, pink salmon are well known to respond rapidly to ecosystem change and can provide unique insight into ecosystem impacts of warming Arctic conditions,” said the authors of a recent research study called “Response of pink salmon to climate warming in the northern Bering Sea.”

Pink salmon have already been sighted in the Canadian western Arctic, as far to the east as Cambridge Bay, along the Newfoundland-Labrador coasts, as well as in Scotland and England.

Since 1960, pink salmon have been observed in Norwegian waters, after Russia introduced pink salmon fry in rivers draining into the White Sea in northwest Russia.

Because of the spread of pink salmon, wildlife officials fear the species could put extra pressure on wild Atlantic salmon stocks from new parasites and diseases.