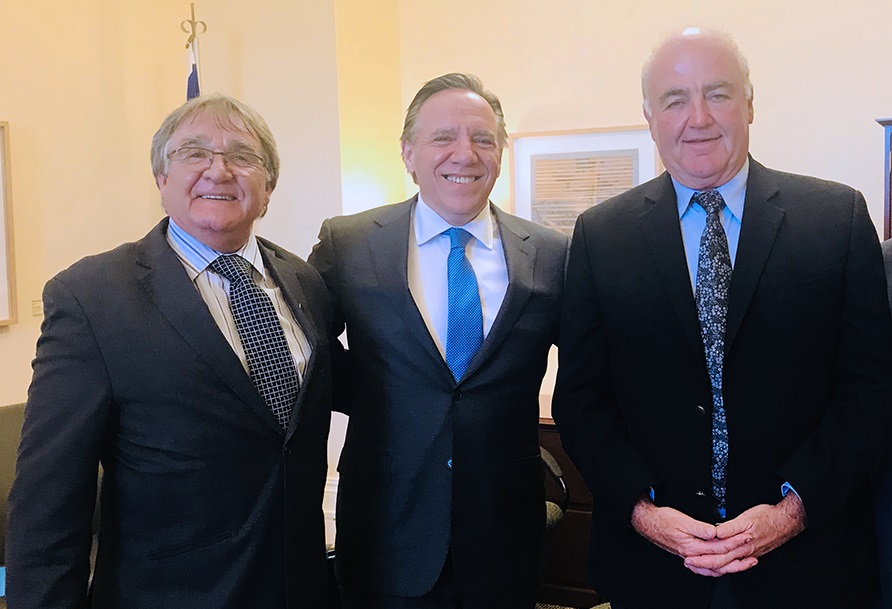 Makivik Corp. President Charlie Watt, left, Quebec Premier François Legault and Ungava MNA Denis Lamothe gather for a photo together in 2018. Quebec’s anti-racism task force has extended an invitation to Makivik Corp. to meet with its members in the coming weeks. (Photo courtesy of the Coalition Avenir Québec)

The Quebec government has announced the creation of a task force to counter racism in the province, and Makivik Corp. has a suggestion for where to start—Nunavik’s justice system.

Although Quebec Premier François Legault has denied there is systemic racism in the province, his government announced on Monday, June 15, the creation of a new “action group” tasked with coming up with ways to combat racism.

The group is composed of seven Coalition Avenir Québec ministers and MNAs, including Lionel Carmant, Quebec’s minister of health and social services; Minister of Indigenous Affairs Sylvie D’Amours; and Ungava MNA Denis Lamothe, who is Nunavik’s representative in Quebec’s legislature.

Legault has asked the group to look at priority areas, such as public security, justice, education, housing and employment in Quebec, and to consider the specific realities of racialized and Indigenous communities.

But Makivik Corp., which represents Inuit in Nunavik, says the group is already flawed without the representation of Inuit or other Indigenous groups.

“The protests taking place around the world highlighting systemic racism inside the justice systems is alive and well in Nunavik and it sickens me,” said Makivik President Charlie Watt in a June 17 statement.

Among its demands, Makivik said that Nunavik in particular should have an Inuk chief of the Kativik Regional Police Force.

Makivik also called for a revamp of the region’s youth protection services to reflect Inuit culture and a justice system that is based in the region, rather than one that relies on a circuit court and southern lawyers.

Makivik pointed to a handful of reports and inquiries that have already exposed issues of racism and inequity in Nunavik and within other racialized and Indigenous communities throughout Quebec.

“The pandemic, and the demonstrations related to systemic racism within police forces, are bringing these issues to the forefront, and we want to work with you to get to the bottom of the problems of policing and the justice system in Nunavik,” Watt said, in a comment directed to the government.

For its part, the task force has been mandated to come up with a series of recommendations to be tabled this fall.

“We were all deeply touched by what happened in the United States,” said Premier Legault earlier this week, referring to incidents of police brutality against Black Americans and the anti-racism protests that have followed.