Reflection: the National Day for Truth and Reconciliation

Stories we loved to tell: Nunatsiaq News Reporter Jeff Pelletier recounts one of his favourite assignments of 2021 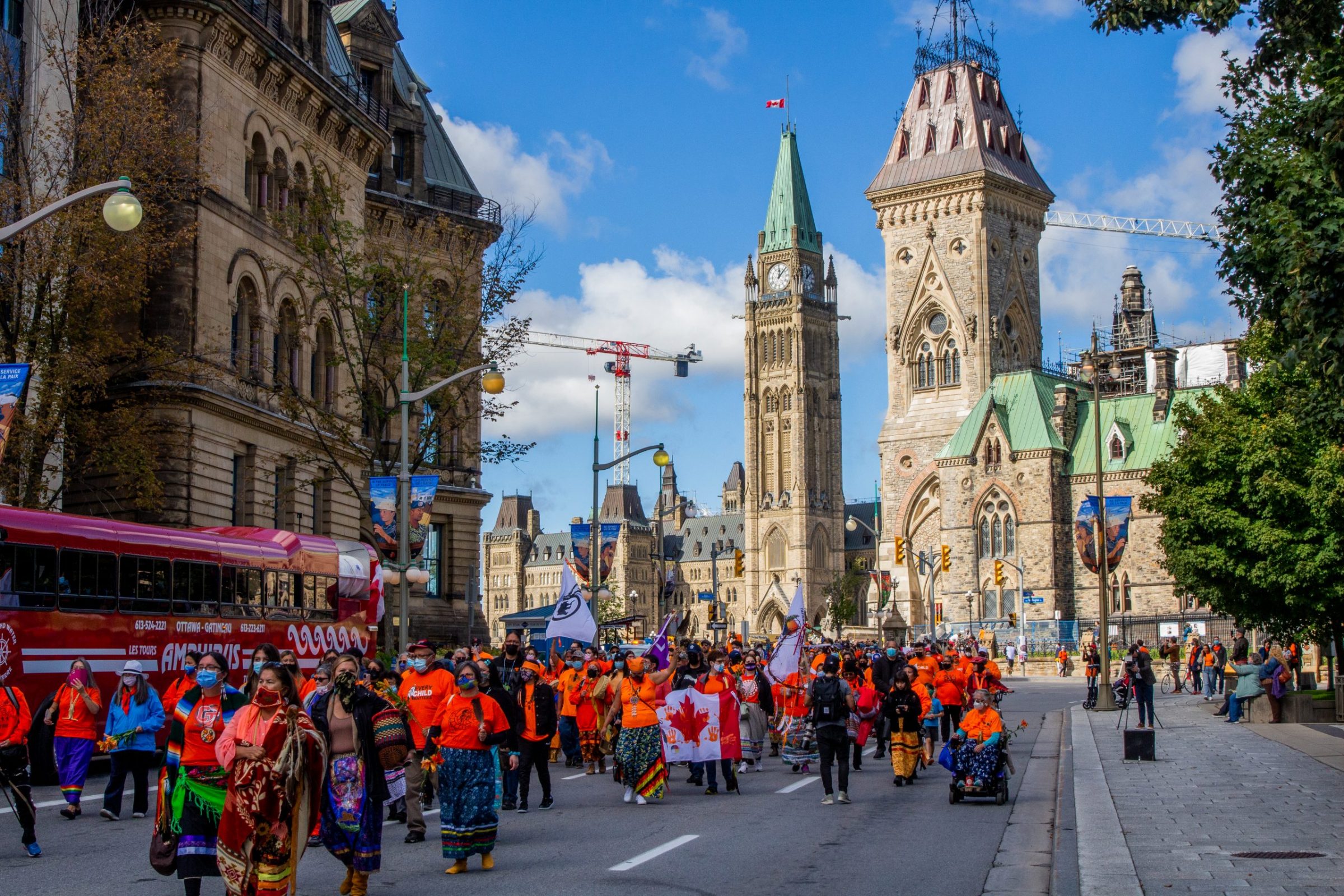 A sea of orange shirts marches from Parliament Hill to Confederation Park in Ottawa on Sept. 30, 2021, the National Day for Truth and Reconciliation. (Photo by Jeff Pelletier)

On Sept. 30, Canadians across the country marked the National Day for Truth and Reconciliation as a federal holiday for the first time.

The day is an opportunity to remember and reflect on the lives of Indigenous children who died while in the residential school system or those survivors whose lives were changed forever.

Indigenous communities and their allies had commemorated Orange Shirt Day for years without federal recognition, but news leading up to this year’s federal holiday made the day impossible to ignore.

In May, the bodies of 215 children were located in unmarked graves at the former Kamloops Indian Residential School in British Columbia. In the months that followed, more graves were found at other residential school sites, containing the bodies of hundreds of children.

For many Canadians, it came as a shock. But for residential school survivors and their families, the graves confirmed what they knew all along. They called it a genocide.

This past summer, that news prompted me to spend a lot of time learning and reflecting on this country’s past, present and future. I felt I had known a lot about residential schools for years, but I still had a lot of learning to do. It was a systematic attempt at erasing multiple cultures, and the consequences of it are still felt today.

When I started at Nunatsiaq News on Sept. 13, I looked ahead to Sept. 30 as another opportunity to listen, watch and learn. When the day came around, I made my way to Parliament Hill to do just that.

I didn’t know what to expect from the events on Sept. 30. Was it going to be a memorial ceremony, a protest, or a cultural celebration? In a way, it was a mix of the three.

The day began with sombre speeches and heartfelt conversations with attendees. There were singing, drumming and dancing performances, as well as several moments of silence. The bells of the Peace Tower, normally heard across the downtown sector every hour, didn’t even ring. All eyes and ears, in a see of orange, were on the presenters.

“There’s been a war here, and Indigenous people need that recognized,” Jenny Sutherland of Moose Cree First Nation told me. “We need the support of the non-Indigenous community to help us with our healing.”

Until that day, I had not considered the residential school system as an act of “war,” but Sutherland’s words were a poignant characterization of colonial violence, committed by the Canadian government against Indigenous peoples.

Several speakers, including survivors, shared their stories of pain and resilience. Following the speeches and performances, some of the elders in attendance led a short and quiet march through downtown Ottawa.

When the march ended, the day didn’t feel as sombre as it began. On what was a warm and sunny day in Ottawa, people were smiling, enjoying some buffalo burgers at a barbecue stand, and there seemed to be a hopeful and positive mood in the air.

I felt I had learned quite a bit from the National Day of Truth and Reconciliation. I’ve thought about the stories I heard on Sept. 30 almost every day since.

Perhaps the best takeaway I can leave from the day was from Morty, an Inuk woman from Arctic Bay, who I caught up with as she and her group from the Ontario-based organization Tungasuvvingat Inuit were on their way home from Confederation Park.

She described her feelings of seeing so many young Indigenous and non-Indigenous people unite under a message of remembrance and reconciliation.

“Starting this point, it’s very hopeful that it’s going to be passed on from generation to generation now,” she said. “I’m very proud of it.”