“It’s really an amazing story, in the sense of, the chance of that happening, it was extremely low” 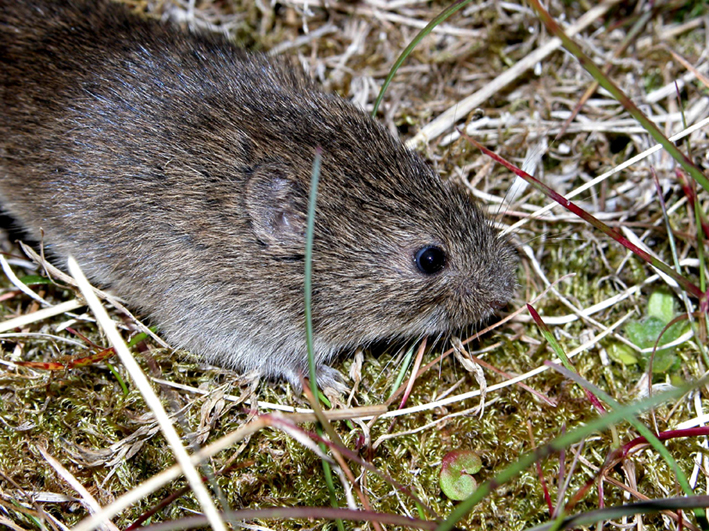 This is a sibling vole, a small rodent that was accidentally introduced into the Norwegian Arctic archipelago of Svalbard about 60 years ago. (Photo by Nigel G. Yoccoz from the University of Tromsø)

One of the more unusual examples of Russia’s expanding influence in the Arctic doesn’t involve nuclear submarines or troops conducting military exercises.

Instead, it’s small and furry, and increasingly gaining a foothold on the Norwegian Arctic archipelago of Svalbard.

We’re talking about the sibling vole—a mouse-like critter about half the size of an Arctic lemming—that’s native to more southerly climes.

The voles are believed to have been introduced about 60 years ago by a Russian coal-mining company, in a shipment of hay intended for cattle.

The voles settled along a narrow coastal strip near Grumant, an abandoned Russian company settlement not far from Longyearbyen, Svalbard’s administrative centre.

The voles could have perished in different circumstances. But, in a stroke of good fortune for them, they got a bit of help from a colony of thick-billed murres.

The birds’ guano, deposited on a slope beneath the cliff, had provided enough fertilizer to create an area lush with vegetation, providing plenty of food for the small rodents.

“It’s really an amazing story, in the sense of, the chance of that happening, it was extremely low,” said Dominique Fauteux, a research scientist with the Canadian Museum of Nature who visited Svalbard in August to learn more about the voles.

Voles would have trouble surviving at a similar latitude in Canada’s eastern Arctic. But Svalbard enjoys a considerably warmer climate due to Atlantic ocean currents. “It will rarely go below -20 C,” said Fauteux. “But it’s still the High Arctic.”

Fauteux has previously studied how lemmings help drive the population booms and busts of Nunavut’s foxes and owls.

He visited Svalbard, in a collaboration with Norway’s University of Tromsø and the Norwegian Polar Institute, to see what he could learn about the population dynamics of the voles.

Fauteux studied the vole population with the help of camera traps. These are steel boxes with openings at both ends and cameras mounted inside, which will take pictures of animals passing inside.

Voles, being uncomplicated creatures, walk through the boxes without any need for bait to lure them, because the boxes look like tunnels, said Fauteux.

During population booms, the voles spread from the guano-fertilized slopes toward Longyearbyen to the east and Barentsburg to the west. Svalbard residents with cabins along the coast have reported that the rodents’ range has spread over the past two decades, although it remains restricted to patches of grass along the coast, said Fauteux.

“It seems the voles are spreading right now,” he said. “They’re taking advantage of the warming climate.”

Another consequence of climate change, however, may be placing a limit on the growth of Svalbard’s vole population. That’s increasing amounts of rain falling on snow. This rain later freezes, coating vegetation in a layer of ice.

Elsewhere in the Arctic, such rain-on-snow events have been known to cause caribou to starve, by preventing the animals from getting at the lichen they depend upon. It poses similar problems for Svalbard’s voles.

“Rain on snow events are killing almost all the voles, because of the ice crust on the snow,” said Fauteux. “The population drops to almost zero, and then they need some time to build up.”

But vole populations quickly rebound. “It’s actually one of the species that reproduces the fastest,” said Fauteux. “Within two weeks after the vole is born, it can start reproducing.”

Svalbard’s voles have been observed reaching population densities of about 120 per hectare, said Fauteux. That’s about 15 times the population density of the lemmings he’s studied on Nunavut’s Bylot Island.

“Because of that, the voles need to leave the area, they need to find some new patches of vegetation. That’s why they’re forced to move out of the core area of the colony,” said Fauteux.

“They’ve been there for at least 70 years. They do that almost every year—the spreading can happen several kilometres away.”

The voles may not look threatening, but they’re known to harbour a potential threat to Svalbard’s inhabitants: a tiny tapeworm, called Echinococcus multilocularis, that can cause fatal tumours in people.

The parasite’s usual hosts are rodents, foxes and coyotes. Human infections are rare, but are often fatal if not treated. The parasite creates slow-growing cysts in the liver and other organs.

On Svalbard, there’s no concern about the voles spreading the parasite directly to humans. But if a fox eats an infected vole, “the parasite goes into the poop of the fox,” said Fauteux.

“Then, if you’re looking for plants and searching the ground, and there’s fox poop nearby, then there could be some parasites, or at least some eggs on the vegetations. Then your hands could get infected. Then you put your hand in your mouth or on your eye, then you get infected.”

Over the past year, Svalbard’s governor has asked residents of Longyearbyen to help trap voles, in an effort to see whether any voles near town have the parasite.

“When I was there, there were 80 voles trapped by the local people, and we found no parasites in the voles,” said Fauteux. “That pretty much means the foxes don’t go too close to town.”

This strain of Echinococcus multilocularis has long been common in Europe. In recent years, researchers have found it has become widespread in wildlife in parts of western Canada.

It’s also already been found in Nunavut. The first large-scale survey of Echinococcus multilocularis in western and Arctic Canada found in 2014 several instances of the parasite in Arctic foxes caught at the Karrak Lake research station near Cambridge Bay.

That same survey didn’t find any instances of the parasite at the other location in Nunavut included in the survey, Bylot Island.

But it’s possible that the parasite could further spread in Nunavut from Svalbard.

Earlier this year, researchers announced they had tracked a female fox that trekked more than 3,500 kilometres across the sea ice from Svalbard to Canada’s Ellesmere Island.

“This is something that could be found in Arctic Canada,” said Fauteux. “The foxes are moving so much in the Arctic, that parasite is probably everywhere in the Arctic.”

That’s why, Fauteux said, lemming researchers on Bylot Island will continue to be on the lookout for the parasite.