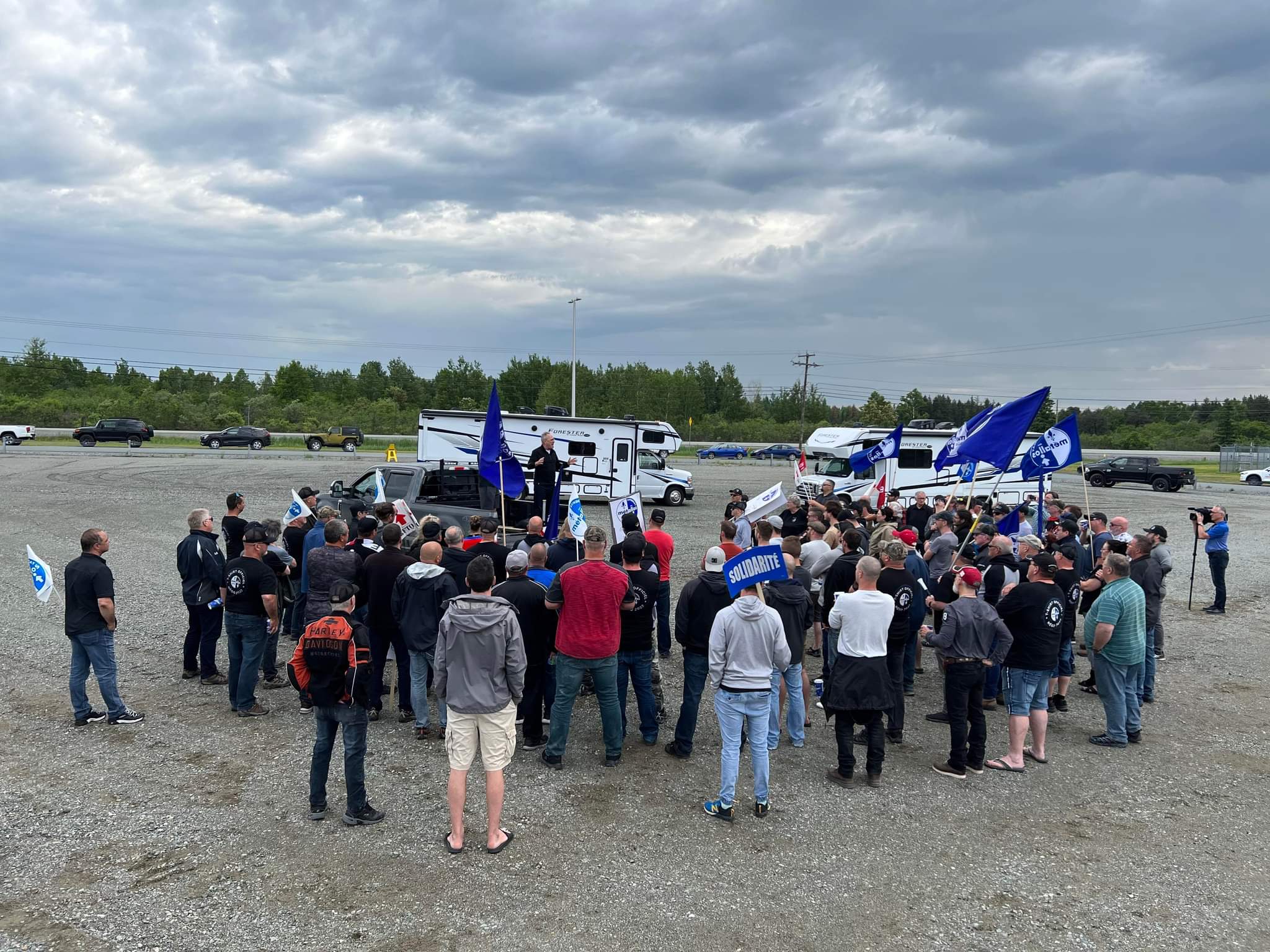 United Steelworkers members from Raglan Mine picket at the airport in Rouyn-Noranda, Que., Thursday. That same day, Glencore Group announced that some mining operations would be resuming Friday. (Photo courtesy of Cimon Guy)

Some mining operations resumed at Raglan Mine in Nunavik on Friday as a labour dispute between its unionized workers and Glencore Group, which owns the mine, entered its fourth week, the company says.

Work at Raglan Mine came to a halt on May 27 after 630 United Steelworkers members went on strike. The union and company had been trying to negotiate a new collective agreement since the end of March.

In the days that followed the strike, unionized employees were flown out of the mine and production stopped. More than 200 non-union employees and contractors stayed on site.

Raglan Mine, which is located in the northeast region of the Ungava Peninsula, is Quebec’s biggest nickel producer, extracting 1.5 million tonnes of ore a year. It produces about 40,000 tonnes of nickel-in-concentrate per year. It also produces smaller amounts of copper and cobalt. The mine is Nunavik’s largest employer, with 1,200 rotational employees.

Workers at the mine will be producing ore, but at a lower capacity, said Amélie Rouleau, Raglan’s director of public affairs. The goal is to have a stockpile of ore ready to process when the mine returns to normal operations and to keep contractors employed during the strike, she said.

“We’re restarting some activities that were done by the union but legally in the boundaries that we’re able to do it,” she said.

The details of the return were discussed with Raglan staff Thursday. As those meetings were happening, about 80 unionized employees picketed in Rouyn-Noranda, Que., at one of the airports used by Raglan workers.

Cimon Guy, a mine worker and member of the union’s negotiating committee, said the union and Glencore have agreed to allow a union representative inspect and make sure the resumed work is being carried out safely and properly.

“We are very concerned, to say the least, about what type of work is being done at the mine site and by who,” he said.

Over the past few weeks, both sides have met independently with a mediator from Quebec’s Ministry of Labour, but negotiations remain at an impasse.

Rouleau said that as part of Glencore’s offer, Raglan’s unionized employees would earn more than their counterparts at other mines in Canada.

“We feel the employer lacks respect towards the employees who sacrifice to make this giant company profitable,” he said.

Both the union and the company have expressed their willingness to return to the negotiating table, despite accusations of stalling coming from both sides.

Rouleau said she hopes to see the first workers strike in the 27-year history of Raglan Mine to end soon.

“It’s just hard to see … it’s not in the honour of what Raglan is, it just doesn’t make sense,” she said.