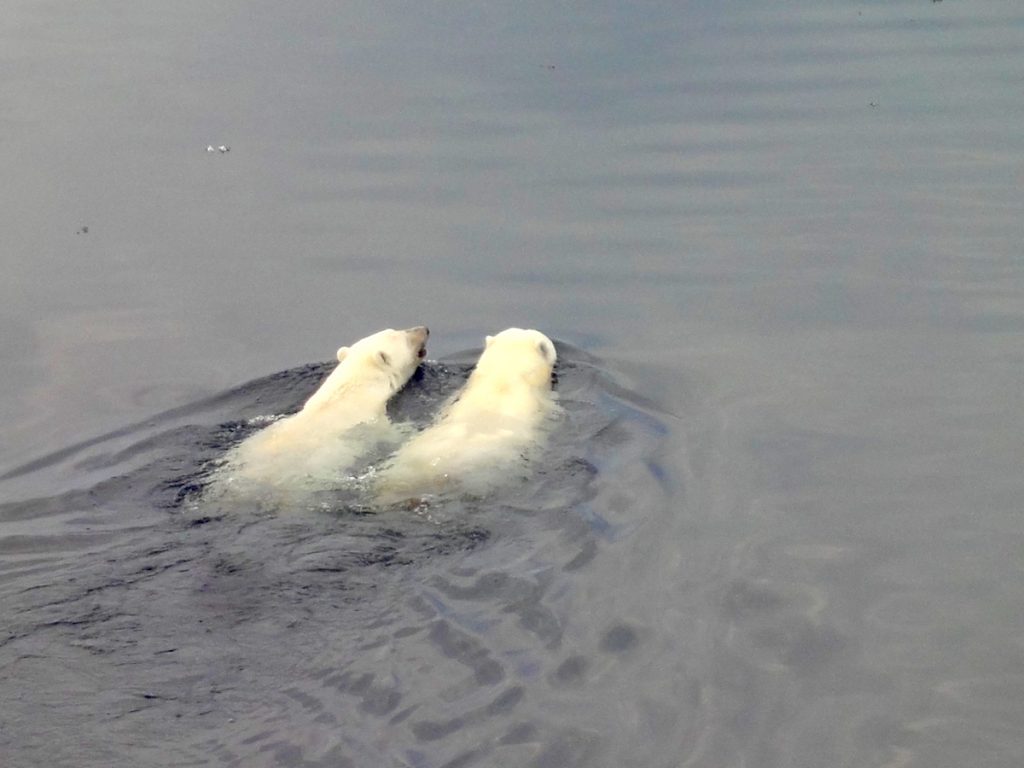 Polar bears in M’Clintock Channel and the Gulf of Boothia are benefiting from melting sea ice with more seals and other prey drawn to the warming ecosystems. (File photo)

Polar bears in two Nunavut regions have been getting fatter since the 1990s, partially because of melting sea ice, according to reports published by the Government of Nunavut earlier this year.

It turns out that a bit of melting helps support larger populations of seals, which are the bears’ main food supply. But this benefit will likely dwindle as sea ice continues to melt due to climate change, said Brandon Laforest, senior specialist of Arctic species and ecosystems with WWF-Canada.

For now, bears in two subpopulations — Gulf of Boothia and M’Clintock Channel — are putting on weight thanks to the extra food.

“It’s usually a really great indication of health, the fatter the bear, generally the healthier they are,” said Brandon Laforest, senior specialist of Arctic species and ecosystems with WWF-Canada, who recently wrote an online post about the study.

For seals, “there’s more fish for them to eat and more ability for them to have breathing holes and colonize areas,” Laforest said.

A scoring system was used to compare the polar bears’ weights between the first study period in 1998-2000 and subsequent periods between 2014 and 2017.

Gulf of Boothia bears scored higher in the recent period, meaning more bears were considered “fat or obese” and fewer were considered “thin.” Researchers, who often monitored bears from a helicopter, used a five-point scale to evaluate bears’ weights – with one being skinny and five being obese.

M’Clintock Channel bears’ body conditions and weight also improved across the board, except for adult males, which is normal in certain periods when they prioritize breeding over feeding, according to the study.

Skin and hair samples were taken with remote biopsy darts shot from a helicopter, making it possible to identify them without harming them and safely from a distance.

Despite the good news, climate change is still the main threat to the species, according to the study.

Sea ice melting is beneficial for the bears until the ice melts too much, depriving the bears of a hunting platform, Laforest said.

The threshold for when continued ice loss could be bad news for the bears is currently unknown, according to the study.

“If things stayed the way they are now, it would probably be really great for the bears, but every indication we have is the climate is continuing to warm and the ice will continue to decline,” Laforest said.

Polar bears in populations in regions further south, such as Hudson Bay, are losing weight and showing declines in body condition, according to Laforest.

“You don’t want to see that same trend continuing further north,” Laforest said, “but it is a bit of a warning sign that these ecosystems are following the same trends.”

The same pattern was observed in Kane Basin between Greenland and Canada, Laforest said. “I would say this is a global trend.”

Not only are polar bears in M’Clintock Channel and the Gulf of Boothia getting fatter and healthier, but they’re also more numerous. For example, the M’Clintock Channel population stood at 716 bears near the end of the study compared to 325 when it began.

Credit for this population growth should go to Inuit communities, the Nunavut Wildlife Management Board and hunters who have been harvesting at a lower rate for years to allow populations to recover, Laforest said.

Both populations have seen stable population growth over the past two decades and the M’Clintock polar bear population has recovered from being over-harvested between 1979-1999, according to the study.

“There’s a misconception sometimes around the world that polar bears are going extinct and it’s only a matter of time before they’re lost, but I think what this study shows is it’s a much more complicated situation,” said Laforest.