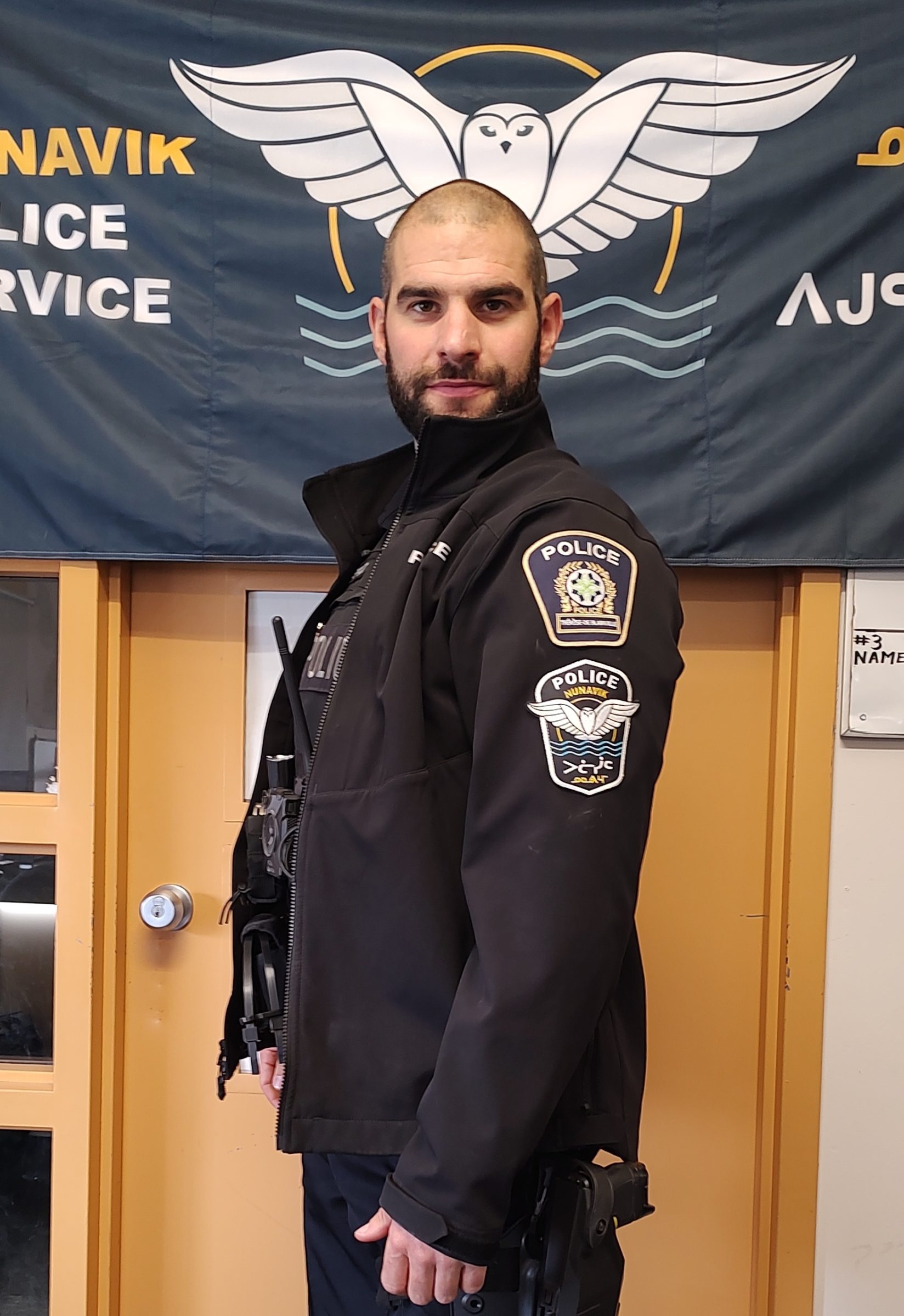 Simon Perreault, a police officer from Thérèse-De Blainville, is currently on loan with Nunavik Police Service in Kangirsuk. On his uniform, he wears the badges of the two departments he serves. (Photo courtesy of Simon Perreault)

The Nunavik Police Service is bolstering its rank by borrowing officers from other Quebec regions.

It announced last month that it has signed a loan agreement with the regional police department in Thérèse-De Blainville, Que., a municipality north of Montreal.

This isn’t a first for Nunavik’s police service. For the past two years, provincial Sûreté du Québec officers have been working in Nunavik to fill some of the region’s policing shortages.

Simon Perreault, the first of the Thérèse-De Blainville patrol officers to arrive in Nunavik, has been living in Kangirsuk for the past month, following a week of training in Kuujjuaq. He’ll be posted in the region for at least seven months, but isn’t sure if he’ll be staying in Kangirsuk in the new year, depending on operational needs.

With 11 years of policing experience behind him, Perreault said he wanted the chance to try something new so he packed a suitcase and headed north.

“That just happened at the right time in my career,” Perreault said in an interview.

“I like to travel a lot, I like to meet with the new cultures, so, here I am.”

Kangirsuk is a different environment from where Perreault is used to working. With a population under 600, the community is the type of place where everyone knows everyone. Perreault said he’s getting used to the notion that he “can’t hide” in such a small place, and he’ll run into the people he has arrested at the local co-op store, for example.

However, Perrault said he wants to build trust with the people in his adopted community.

“The whole historical thing with the police officers, and generally, just the white people here in the North – some of them [have done] bad things in the past,” he said.

“Inuit are kind of close, they don’t trust us as fast as I would like – and again, that’s for a good reason, I think – so I have to work harder to get their trust, but I think I’m on a good way.”

According to Jean-Francois Morin, Nunavik police’s deputy-chief of operations, the agreement with police in Thérèse-De Blainville is also a way to mentor some of the younger officers who are permanently based in the region.

The current loan agreement came about after a deal with Montreal police was put on hold. According to Morin, a rise in gun violence in Montreal has limited the resources the city’s police service was able to send out to other jurisdictions.

One of Nunavik police’s long-term goals is to hire more local recruits, Morin said. According to him, only four of the 83 working officers in the region are Inuit from Nunavik.

Morin said there are several barriers to recruitment; for one, some potential recruits fear they may have to arrest a family member or friend. But, the biggest barrier is that all police training occurs in the south over the course of a few months, often at the RCMP Academy in Regina.

To overcome that barrier, Nunavik police are targeting recruitment campaigns towards Nunavimmiut who are already studying post-secondary education in the south.

“Our goal would be to have as many Inuit police officers as possible, and we’re not letting it go,” Morin said in an interview.

“We’re very open-minded, and we’re thinking outside the box, and we’re doing everything we can to recruit Inuit police officers.”

The agreement with Nunavik is the fourth that Thérèse-De Blainville police have made with an Indiginous community’s police department.