Trudeau speech in Iqaluit re-scheduled to Friday morning at 9:30 a.m. 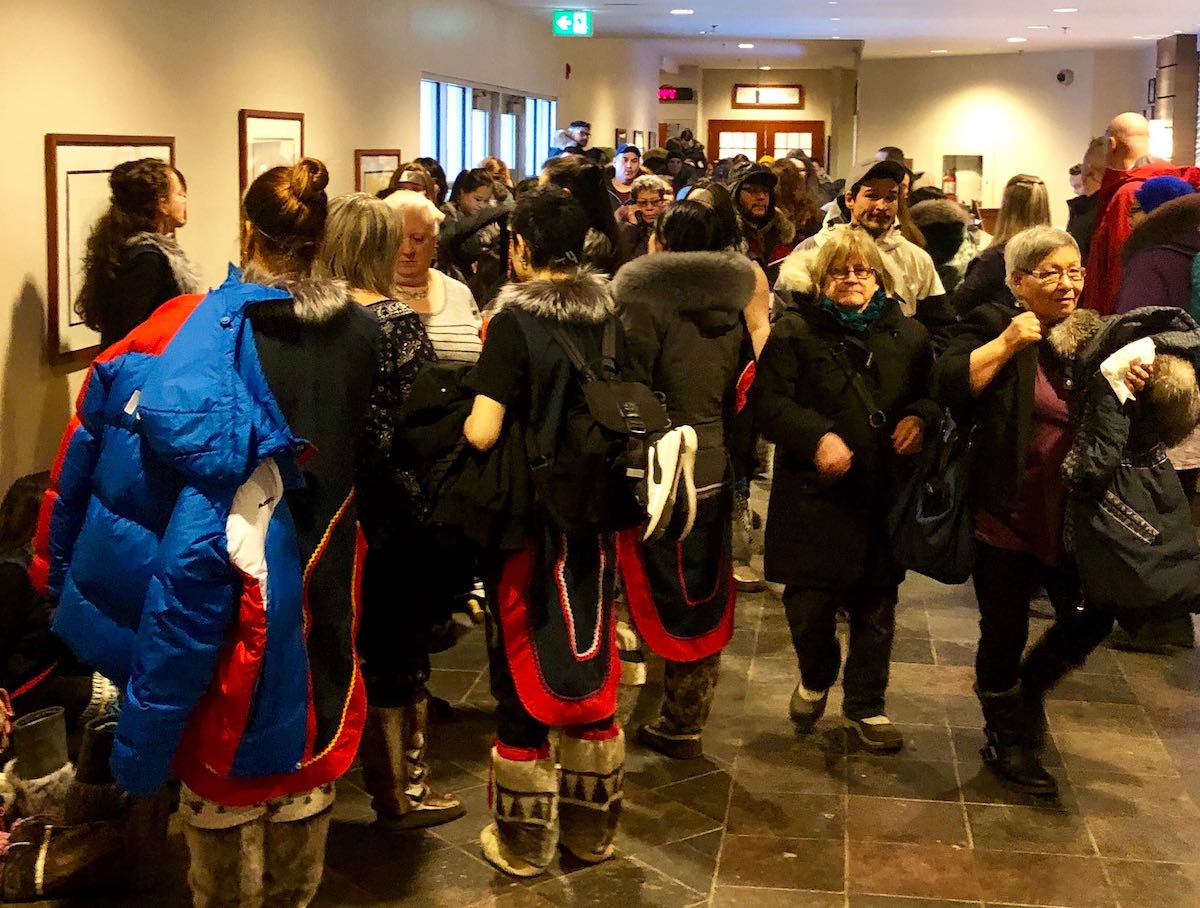 People gather inside the lobby of Iqaluit’s Frobisher Inn, waiting to hear from Prime Minister Justin Trudeau. Trudeau’s apology, for the suffering of Inuit who were treated for tuberculosis in the south during the 1940s, 1950s and 1960s, is re-scheduled for Friday morning at 9:30 a.m.. (Photo by Beth Brown)

Prime Minister Justin Trudeau’s apology for the suffering many Inuit endured while undergoing tuberculosis treatment from the late 1940s to the late 1960s, is now scheduled for 9:30 a.m., Friday morning, at Iqaluit’s Frobisher Inn.

The apology was originally scheduled for Thursday afternoon but was postponed to Friday morning after his aircraft turned around. Iqaluit had been hit by near-blizzard conditions, with low visibility and winds gusting up to 70 kilometres an hour, making it too dangerous to land at the airport.

In Ottawa, during an early morning news conference Thursday, Trudeau said the apology would be another defining moment on “the road to reconciliation.”

The apology is part of a process called “Nanilavut” or “let’s find them,” which will contain measures aimed at helping Inuit find the graves of family members who were transported south for TB treatment and never returned home.

In another initiative, the federal government committed $27.5 million over five years in its 2018-19 budget for TB eradication in Inuit Nunangat. 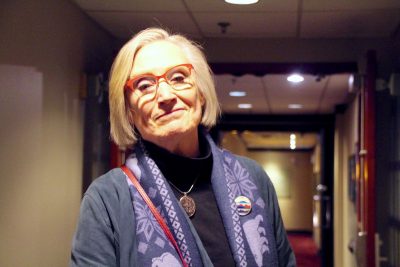 Among those gathered at the Frobisher Inn, where Trudeau planned to speak, was Carolyn Bennett, minister of Crown-Indigenous relations, as well as Inuit Tapiriit Kanatami President Natan Obed and many Inuit from the four Inuit Nunangat regions.

By about 1 p.m., it became clear that Trudeau’s aircraft could not land, and his speech was postponed. At about 3 p.m. the City of Iqaluit suspended all municipal services and Government of Nunavut offices shut down due to the worsening storm.

Later on Thursday evening, the prime minister’s office confirmed Trudeau will do the apology on Friday morning.

Among the Inuit gathered for the apology were Lizzie Putulik and Lally Annahatak from Kangirsuk in Nunavik. Their aunt Maggie was sent south for TB treatment as an eight-year-old. She never returned home.

Putulik brought with her a precious 2003 copy of Makivik News containing a story about her aunt, as a testimony to the impact of TB treatment on the Inuit families left behind.

Putulik and Annahatak, like many other women in Iqaluit for the apology, wore beaded amautis in honour of the special occasion.

The long-awaited apology also came up in the Nunavut legislature on Thursday. 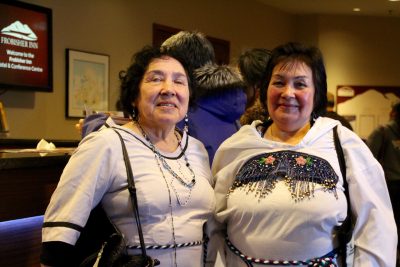 Lally Annahatak and Lizzie Putulik of Kangirsuk came from Nunavik to witness the planned apology from Trudeau. (Photo by Beth Brown)

Aggu MLA Paul Quassa said that he still struggles with the issue of Inuit TB patients who never came home.

“We expect those who leave to come back,” he said in a member’s statement.

But many did not. Rankin Inlet North-Chesterfield Inlet MLA Cathy Towtongie said a family member sent away for TB treatment never returned. For 20 years, she looked for her: E3468 was her disc number.

In question period, Iqaluit-Niaqunngu MLA Pat Angnakak spoke of how families are still suffering as they look for traces of their relatives.

“A lot of my colleagues here spoke of this today in the house this morning because their relatives were taken away after being diagnosed with TB,” she said. “Many were sent away on the hospital ship—the C.D. Howe—and a lot never came home. They are still missed every day. Some families do not even know where their loved ones are buried.”

“It is sad that it took so long. I think it should have been noted and apologized a long time ago,” he said.

Last March in Ottawa, Jane Philpott, then the Indigenous services minister, with ITK’s Natan Obed, announced a plan to eliminate TB across Inuit Nunangat by 2030, and reduce the rate of active TB by at least 50 per cent by 2025.

From January 2016 to December 2017, 40 new cases of TB were diagnosed in Qikiqtarjuaq, with 70 per cent of the cases being among children and youth.

Ileen Kooneeliusie, a 15-year-old from Qikiqtarjuaq who had TB, died of the infectious disease in Jan. 2017.

Nunavut carried out a campaign to screen for TB in 2017 and is now holding its third community-wide screening clinic in Cape Dorset.

With files from Courtney Edgar