During Prime Minister Justin Trudeau’s visit to Iqaluit on Thursday, he will apologize for the mistreatment that Inuit suffered as TB patients in the 1940s, 1950s and 1960s. (Photo by Jane George)

Prime Minister Justin Trudeau plans to visit Iqaluit Thursday to deliver a long-awaited apology for the past mistreatment of Inuit tuberculosis patients in the 1940s, 1950s and 1960s.

The apology will be accompanied by a repeated federal commitment to eradicate TB in Inuit Nunangat regions, where the rates of the infectious disease run nearly 300 times higher than among other Canadians.

Trudeau last visited Iqaluit in February 2017, when the prime minister, Inuit Tapiriit Kanatami President Natan Obed, and Crown-Indigenous Relations Minister Carolyn Bennett signed a partnership agreement that contained a federal commitment to respond to the mistreatment of Inuit during the TB epidemics of the past. 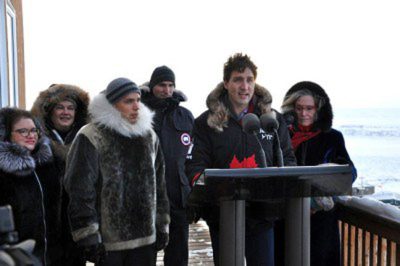 Prime Minister Justin Trudeau with ITK President Natan Obed and Crown-Indigenous Relations Minister Carolyn Bennett in Iqaluit in February 2017, when they signed the partnership agreement that contained a federal commitment to respond to the mistreatment of Inuit during the TB epidemic of the 1940s, 1950s and 1960s. (File photo)

Bennett recently told the Senate special committee on the Arctic that Trudeau would deliver the apology this month in Nunavut, as part of a process called called “Nanilavut” or “let’s find them.”

Nanilavut should also come with money, the $27.5 million over five years earmarked for TB eradication in the 2018-19 federal budget.

Nanilavut will also contain measures aimed at helping Inuit find the graves of family members who were transported to southern Canada for TB treatment between the 1940s and the 1960s.

During that period, about one-third of the Inuit population living in Canada became infected with TB, the Canadian Public Health Association has estimated.

It 1956, it’s estimated that about one-seventh of all Inuit living in Canada were languishing in southern sanatoria and hospitals.

The average length of stay was two and a half years, but some stayed longer and many Inuit never came home.

The families of those Inuit TB patients who died in the south were often not informed of those deaths, and many Inuit were buried in unmarked pauper’s graves.

The Nanilavut process will include help for Inuit families to gain access to records of their missing loved ones and ancestors. Work on a database containing this information is already well underway and the regional Inuit organizations across Inuit Nunangat have hired staff to expand its work.

News of Trudeau’s visit to Iqaluit comes as no surprise to some residents of Nunavut’s capital, who could be heard talking about the preparations at a bank and in a local Inuit arts and crafts shop.

Trudeau plans to exit Ottawa for Iqaluit after a week of turmoil which saw the resignation of two cabinet members, Jody Wilson Raybould and then Jane Philpott, in reaction to the SNC-Lavalin scandal.

Sources, who we have not named because they were not authorized to speak to the media,  confirmed Trudeau’s schedule in Iqaluit.

This dinner will be followed by a public screening at the nearby Astro Theatre of the award-winning film The Necessities of Life, which is about an Inuk sent off to a Quebec sanatorium in the 1950s (Inuujjutiksaq or Ce qu’il faut pour vivre in French).

But family members of those affected by TB are expected to be in the audience for the film.

Trudeau is expected to arrive in Iqaluit at mid-day, Thursday. At 1:30 p.m. he will be present at the Frobisher Inn for the delivery of the apology, to an audience that will include many Inuit leaders and several federal cabinet ministers.

This event will be live-streamed on various Facebook pages, including that of ITK.

At 4:30 p.m. Trudeau and the others will attend a public feast planned for Inuksuk High School.

Trudeau also participated in feasts on two previous occasions in Iqaluit in 2015 when he was trying to wrest the riding from the Conservatives.

While Nunavut voters widely went Liberal (47.2 per cent voting Liberal) in 2015, MP Hunter Tootoo, which initially served as fisheries minister, resigned from cabinet and the Liberal caucus in 2016 to seek treatment for addiction.

He now sits as an Independent, having resisted numerous calls for him to resign after details of an inappropriate relationship with a staff member surfaced.