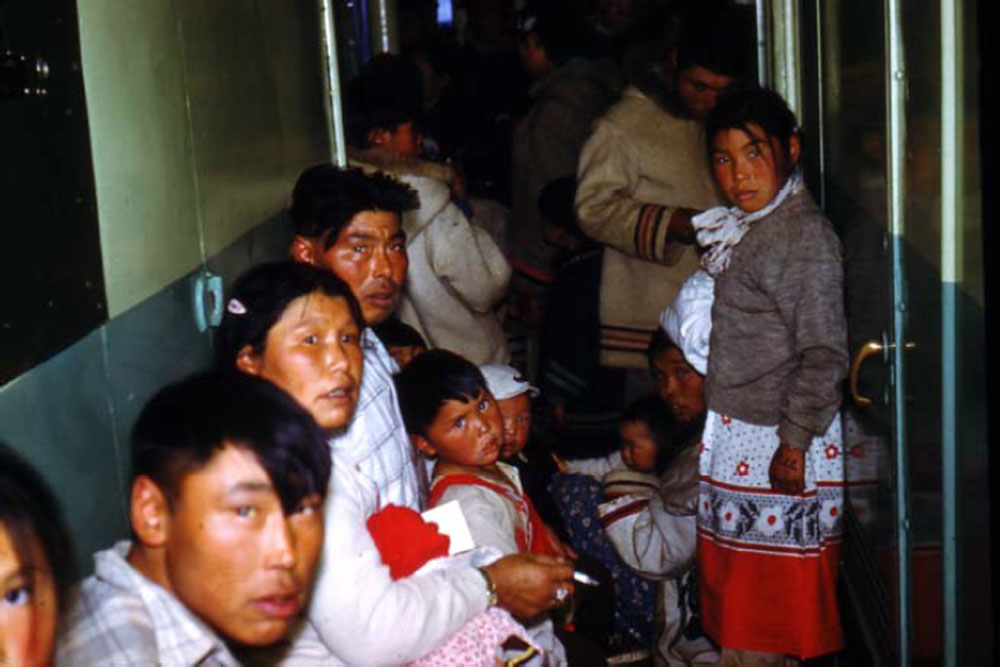 Inuit wait in line for medical examinations aboard the hospital ship C.D. Howe, in a photo likely taken sometime in the 1950s. (Faculty of Health Sciences, McMaster University)

The federal government will likely apologize next month for the widespread suffering caused by the mistreatment of Inuit during the tuberculosis epidemics of the 1940s, 1950s and 1960s, a source familiar with the process confirmed with Nunatsiaq News today.

But it’s not yet clear if Prime Minister Justin Trudeau will fly to Nunavut or some other northern location to deliver the long-awaited apology in person, the source said.

Carolyn Bennett, the Crown-Indigenous relations minister, had suggested to members of the Senate Special Committee on the Arctic that Trudeau will make the apology in Nunavut, part of a process called called “Nanilavut.”

“As I think you know, next month the prime minister will travel to Nunavut to give the Nanilavut apology,” Bennett said Feb. 4.

But that’s still not firm — because the Prime Minister’s Office is still working out details of the project, the source said.

Nanilavut is a commitment that Trudeau, federal cabinet ministers and leaders of the four Inuit Nunangat regional Inuit organizations agreed to at a meeting in Iqaluit held in February 2017, when together they formed the Inuit-Crown Partnership Committee. 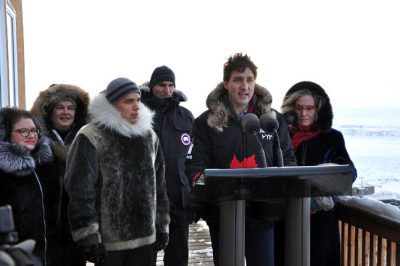 Prime Minister Justin Trudeau with ITK President Natan Obed and Crown-Indigenous Relations Minister Carolyn Bennett in Iqaluit in February 2017, when they signed the partnership agreement that contained a federal commitment to respond to the mistreatment of Inuit during the tuberculosis epidemic of the 1940s, 1950s and 1960s. Carolyn Bennett, the Crown-Indigenous relations minister, told members of the Senate Special Committee on the Arctic on Feb. 4 that the “Nanilavut apology” will occur next month. (File photo)

And this past October, officials from Bennett’s CIRNAC department told delegates at the annual general meeting of Nunavut Tunngavik Inc. that the Nanilavut initiative will be more than just an apology.

That means it will include measures, which have already started, aimed at helping Inuit find the graves of family members who were transported to southern Canada for TB treatment between the 1940s and the 1960s.

During that period, about one-third of the Inuit population living in Canada became infected with TB, the Canadian Public Health Association has estimated.

Between 1950 and 1969, many Inuit were sent south aboard the Coast Guard vessel C.D. Howe, a multi-use hospital and passenger ship that made annual tours of the eastern Arctic.

The late Robert Williamson, a widely respected anthropologist and territorial politician, wrote when he sailed north on the C.D. Howe in 1953, that the “ship was deep in misery.”

“It was terrible because it was the ship which carried the Inuit away from their homes to the sanatoria in the south. And they were herded together in the foc’sle, in the hold of the ship in three-tiered bunks, mass-fed, mass-accommodated. In the stormy seas they were sick, they were terrified, they were demoralized,” Williamson is quoted as saying in Long Way from Home: The Tuberculosis Epidemic, a 1994 book about that period written by Pat Sandiford Grygier.

In 1956, it’s estimated that about one-seventh of all Inuit living in Canada were languishing in southern sanatoriums and hospitals.

The average length of stay was two-and-a-half years, but some stayed longer and many Inuit never came home.

The families of those Inuit TB patients who died in the south were often not informed of those deaths, and many Inuit were buried in unmarked pauper’s graves.

So the Nanilavut process will include helping Inuit families gain access to records of their missing loved ones and ancestors, as well as a database and other supports, federal officials said last October.

The database is already well under way and the regional Inuit organizations across Inuit Nunangat have been hiring staff to expand its work.

At the same time, various groups, and individual families, have for years been engaged in the task of identifying Inuit who died in southern Canada while receiving treatment for tuberculosis.

For example, in 2010, members of the United Church located in the Mohawk community of Kahnawake, southwest of Montreal, identified 15 Inuit buried in Kahnawake’s Protestant cemetery, and erected a monument in their memory.